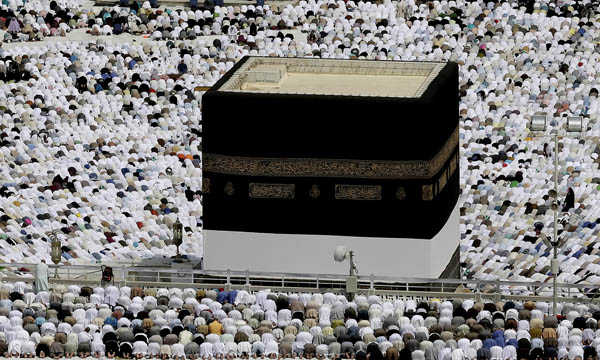 MAKKAH: Nods, smiles, frowns, and hand gestures speak volumes in the holy city of Makkah where Muslims gathered from across the world for the annual pilgrimage manage to communicate in silence.

In the Grand Mosque, an African woman frowns and waves her hand to signal to a female Turkish pilgrim that the prayer is not yet over. She understands, nods, smiles and continues to pray. Afterwards they shake hands and exchange smiles. It all takes place in silence, both women well aware that they could not have had this dialogue aloud as they speak very different languages.

“We call this special means of communication the ‘language of the Haram’ (Grand Mosque),” says Ali Abdullah, a Sudanese shopkeeper living in Makkah. “I deal with Asian pilgrims using sign language,” he said. “We depend on body language and signs and even on drawings in some cases. “I can deal better with Nigerians and other Africans who can usually speak English, but Asians have their own languages which I can’t understand.”

Abdullah, who has been working in Makkah for five years, tries to improve his communication skills by offering customers a pen and paper to draw the item they are looking for as he tries to commit to memory the words they use for the drawing.

Pilgrims nearby stop to ask a security official for directions. He understands, nods and points. “I don’t speak foreign languages but I can understand what they are trying to say and they usually understand my directions,” he says. If not, he has to leave his post and lead them to their destination. It took Majed al-Qulaisi, a Saudi merchant, two to three years to learn Turkish, Malaysian and some Russian. But with Africans, he still communicates using sign language.

“Sometimes they don’t understand what I’m saying. I could say something which a pilgrim would interpret as an insult, get cross with me and walk out of the shop.” After 11 years in the small shop selling rosaries made from precious stones, Qulaisi’s job has become easier as he now knows beforehand what stones every pilgrim is looking for depending on their country of origin. “Southeast Asians usually look for pearls, coral, and wooden rosaries,” he said.

“Africans prefer long rosaries while Turks look for smaller ones with 33 beads” instead of the standard 99, representing the various names of God.