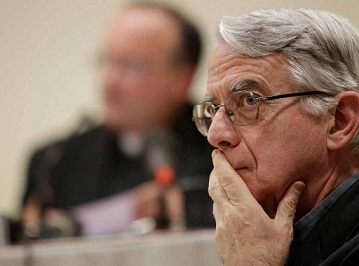 CAIRO – The Vatican has distanced itself from a fear-mongering video by a Roman Catholic cardinal that the rising Muslim immigration and higher birth rate will turn Europe into an Islamic republic, The Age reported Wednesday, October 17.

“This video does not express the view of the synod or the Vatican,” spokesman Father Federico Lombardi said.

Cardinal Peter Turkson, the president of the Vatican’s Council for Justice and Peace, screened a video about the spread of Islam in Europe during an international meeting of bishops earlier this week.

Called “Muslim Demographics”, the video alleges that Europe will cease to exist because of the rising numbers of Muslims.

The seven-minute clip says Muslim immigration and higher birth rates will turn France into “an Islamic republic” within 39 years.

The clip, which has been viewed over 13 million times on YouTube since it was uploaded by an anonymous user in 2009, combines dramatic music with skewed population statistics to make claims about various European countries.

The Vatican said it has nothing to do with the fear-mongering video.

“Turkson has said he is sorry if the video was wrongly interpreted since he did not intend it to be anti-Muslim, merely a comment on the nihilism in Western society,” the spokesman said.

Cardinal Turkson is known for his critical positions of Islam and Muslims.

He has previously said that theological dialogue with Muslims is impossible.

The anti-Islam video has already sparked uproar among Christian bishops.

“Why one of the curial cardinals chose to show this piece of anti-Islamic propaganda is quite unclear,” the Vatican radio said of the video.

It described the material as “fear-mongering”.

Bishops who watched the video were also shocked.

“I think it would be fair to say that several in the room questioned the veracity of the facts followed by ‘Who can this be attributed to?’ and ‘Who actually wanted this film to be shown?”’ said Father Thomas Rosica during a press briefing.

The Holy See’s relations with Islam have not always been smooth.

In September 2006, Pope Benedict delivered a lecture in Germany quoting a 14th century Byzantine emperor that everything Prophet Muhammad (peace and blessing be upon him) brought was evil and inhuman.

The lecture triggered criticisms from Muslim countries, scholars and intellectuals and strained ties between the Vatican and the Muslim world.

The pontiff has repeatedly said the words did not reflect his personal views but stopped short of a clear apology to Muslims.

He also drew the ire of religious leaders after issuing a document titled “Dominus Jesus,” which clearly stated that Christianity was the only true path to salvation.