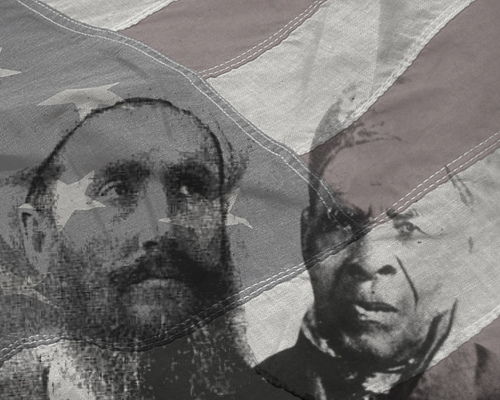 Recently, just as turmoil in the Middle East erupted, New York straphangers were treated to hateful anti-Muslim billboards, courtesy of Pamela Geller, leader of “Stop Islamization of America.” The ads, which declared that radical Muslims are “savages” waging war on the civilized world, created a furor and resulted in widespread defacements (for a roundup, check out the Awl), the arrest of a journalist , and possible changes to the rules governing subway and bus advertisements that might incite violence.

Islamophobia is back with a vengeance. Geller, a self-appointed hate czar, catapulted herself to racist celebrity back in 2010 with shrill denouncements of an Islamic community center in Lower Manhattan near the site of the World Trade Center. Since then, her repeat warnings of Islam’s foreign threat to America have resonated powerfully in a post-9/11 world where violent protests in the Middle East over a crude anti-Muslim film have triggered a fresh wave of anxiety.

It would undoubtedly shock Geller and her Islamophobic buddies to know that Muslims have been in America for so long they could almost have formed a welcoming committee to the Daughters of the Revolution.

Consider this: Anthony “The Turk” Janszoon van Salee, son of the president of the Republic of Salé in Morocco, was among the earliest and richest settlers of Manhattan island, a devout Muslim, and the ancestor of Cornelius Vanderbilt, the Whitneys, Humphrey Bogart, and, according to family lore, Jacqueline Bouvier. That’s right: the Lady of Camelot apparently had a mixed-race Muslim as an ancestor! One of van Salee’s first properties was a farm in lower Manhattan acquired in 1638 located on the north side of the stockade along present-day Wall Street, just blocks from the Park Place Islamic center characterized by Geller as a foreign presence on sacred American soil. A defender of minorities, van Salee became the first settler of Brooklyn. Coney Island, which abutted his property, was known as “Turk’s Island” until the 19th century.

Muslims are feeling unwelcome in America today, but followers of Muhammed were living here before the arrival of English in Spanish-controlled Florida and French Louisiana, where slaves were imported from the Senegambia region of Africa, home to a large Muslim population.

Influenced by the tolerance of the Enlightenment, America’s founders considered Islam’s place in the new republic despite widespread fear of Barbary pirates and a sense of European rivalry with the Ottoman Empire. As befitting a student of law in a religiously diverse land, Thomas Jefferson purchased a Quran to learn about the Islamic legal code – the same Quran that was used in the swearing in of Muslim Keith Ellison to the U.S. Congress. In 1776, John Adams published “Thoughts on Government,” which praised the prophet Muhammad as a “sober inquirer after truth.” Ben Franklin set up a non-sectarian meeting house in Philadelphia, declaring in his autobiography that “even if the Mufti of Constantinople were to send a missionary to preach Mohammedanism to us, he would find a pulpit at his service.”

Tea Partiers occasionally know and distort these facts, but they are completely ignorant about another side of American Islam. Until recently, the study of the African transmission of Islam to America has been neglected, partly because materials are scarce, and partly because early observers were often ignorant of Islam or had reasons for downplaying the fact that God-fearing, literate people among the enslaved had to be written off as heathen and backwards in order to justify the institution.

And yet the numbers of enslaved Africans who were Muslims was significant: Conservative estimates put the number at 10 percent of all slaves, with some estimates running as high as 30 percent. A hodgepodge of sources –from plantation records to runaway slave advertisements to WPA interviews – show that Muslims went to great lengths to observe their religion; that Islam was a marker of status in the larger African American society; and that African American culture reflects the influence of early Muslims. On Sapelo Island, Georgia, for example, the congregation of the First African Baptist Church always prays to the east, the direction in which the church is pointed, and bodies are buried pointing to the east. The Nation of Islam may have been the 20th-century manifestation of a very ancient connection to a religion that had lived on in the South for centuries among African Amerians even though it was overtaken by Christianity. Historian Michael Gomez points out that Elijah Muhammad, born in 1898 in Georgia, grew up at a time when Islam may still have been practiced by African-born Muslims, and the children and grandchildren of early Muslims were likely aware of their Islamic heritage.

On plantations throughout the South, particularly in the early period of slavery, it would have been possible to see enslaved Africans with names like Mustapha and Fatima kneeling on prayer mats, their faces turned toward the rising sun. (Writing of “Arabic-Africans” along the coast of Georgia, Joel Chandler Harris called them “not the most numerous, but the most noticeable” type.) Some planters particularly sought slaves from Senegambia for their knowledge of rice cultivation, and some Southern slave owners considered Muslims superior to non-Muslims as workers, though others considered their education and literacy to be dangerous.

A few enslaved Muslims achieved notoriety, such as Bilali, a “driver” who managed a large plantation on Sapelo Island, Georgia and who, when called upon by his owner to defend the island against the British in 1813, gave a reply that revealed his status and religious pride: “I will answer for every Negro of the true faith, but not for the Christian dogs you own.” (Bilali went on to defend the plantation with a force of 80 armed slaves.) In Fayetteville, North Carolina, a jailed runaway slave from Charleston, South Carolina, astonished locals with his princely bearing and the beautiful signs he made on the wall, writing from right to left. Omar ibn Said, a Muslim scholar, was bought by the brother of the governor of the state, who was intrigued by this highly literate man who eventually wrote his autobiography in Arabic, the only slave to do so in captivity. His Arabic Bible, procured with the help of Francis Scott Key, can be seen today in the library of Davidson College.

Polls show that Americans remain unfamiliar with Islam, and according to the ACLU, anti-mosque activity has bubbled up in more than half of U.S. states in the last five years. Yet Islam is inextricably woven into the fabric of American history, from the distinctive service of Muslims in all American wars, including the Revolution, to the legacy of their descendents, which include notable figures. (Abolitionist Frederick Douglass changed his name from Frederick Bailey, and it is possible that the name “Bailey” is a form of the Arabic common name “Bilali.”)

Muslims wish to be seen as Americans, and a look at America’s Islamic roots proves that they have every right to be – even more, perhaps, than those who rail against them. It’s time to clarify the confusion about the role of Islam in early America and remind ourselves that far from being a foreign presence, Muslims have exerted an influence on American culture even greater than their numbers would suggest from the very beginning. The real foreign presence is Islamophobia, which is completley at odds with America’s founding principles.

For further information on America’s Islamic roots, see Allan D. Austin’s African Muslims in Antebellum America. Helpful articles include Michael Gomez’s “Muslims in Early America” published in the Journal of Southern History and Thomas Custis Parramore’s “Muslim Slave Aristocrats in North Carolina” published in the North Carolina Historical Review. I was aware of this history as a child because the last historian mentioned is my late father.