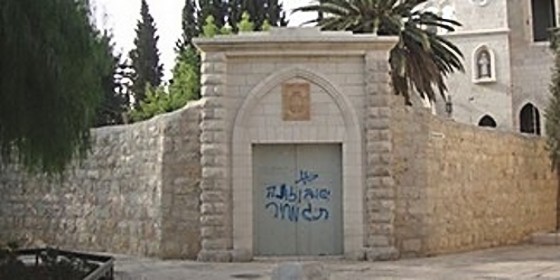 Suspected Israeli settlers have scrawled graffiti and religious insults on a monastery outside the walls of Jerusalem’s Old City on Tuesday, in the latest of a series of attacks on non-Jewish sites.

The vandals wrote the phrase “price tag” in Hebrew on the gate of the monastery – a reference to a violent campaign supporting unauthorized settlements in the Israeli-occupied West Bank.

The “price tag” is the retribution some Israeli settlers say they will exact for any attempt by their government to curb settlements in the territory, which Palestinians want as part of a future state.

The graffiti, which read “Jesus, son of a bitch, price tag”, had already been removed by mid-morning, AFP news agency reported.

The group has targeted mosques and, less commonly, Christian building as they regard any non-Jewish religious sites as an intrusion on the land.

The monastery of Saint Francis is near the spot where tradition says Jesus gathered his disciples for the Last Supper.

It was the second attack on a Christian site in less than a month.

“Price tag actions are contrary to the Jewish religion and causes great harm to Israel,” Israeli President Shimon Peres said in a statement in response to Jabel Sahyoun attack.

A police spokesman said a number of people had been charged in connection with several of the incidents, but gave no details.

Palestinian officials and Israeli rights groups have accused Israeli authorities of not doing enough to investigate the attacks.