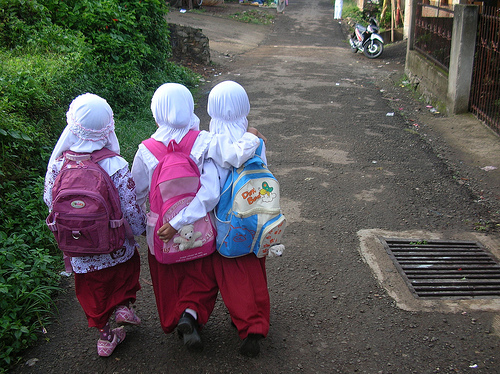 The encouragement to seek children covers both sons and daughters, and along with this general encouragement Islam has given special merits to seeking and bringing up girls – contrary to the thinking of the people of ignorance (age of ‘Jaahiliyyah’) of the past and present, since the people of ignorance – wherever and whenever found – hated (some of them ‘still do’) to have daughters and were grieved and angered by their births!

“And when the news of (the birth of) a female (child) is brought to any of them, his face becomes dark, and he is filled with inward grief! He hides himself from the people because of the evil of that whereof he has been informed. Shall he keep her with dishonor or bury her in the earth? Certainly, evil is their decision.” (An-Nahl 16:58-59)

But the Messenger of Islam, Muhammad(saw), came elevating the status of this gift given by Allah(swt), welcoming the daughters, and raising high the importance of their upbringing with words to delight the hearts of the believing fathers and bring joy to their souls:

“Whoever takes care of two girls until they reach adulthood – he and I will come (together) on the Day of Resurrection – and he interlaced his fingers (meaning in Paradise).” (Reported by Muslim)

So can there be any greater honor given to the daughter and for those who wish to have them and bring them up properly? And he said in another Hadith:

“Whoever has three daughters or sisters, or two daughters of two sisters, and lives along with them in a good manner, and has patience with them, and fears Allah with regard to them will enter Paradise.” (Reported by Abu Dawud, Al-Tirmidhee and others)

And in another Hadith: “They will be a shield for him from the Fire.” (Reported by Ahmad and Ibn Maajah)

And along with the Messenger’s(saw) honoring the daughters with his words, we find that he also gave us a living example in his own actions and behavior – for example,

“One day he (s.a.w) led his Companions in Prayer whilst carrying Umaamah bint Zaynab(ra) when he made rukoo’ he would put her down, then when he stood, he would pick her up.” (Reported by Al-Bukhari and Muslim)

So the position of daughters in Islam is very clear and the encouragement that it gives for them, and also the hatred it has for those who hate them or are grieved at their births! We know from this that hatred in some souls toward something – if found – is not a true judgement upon that thing and this is explained in the Qurân, as Allah(swt) says:

“…If you dislike them, it may be that you dislike a thing and Allah brings through it a great deal of good.” (An-Nisa’ 4:19)

So how many righteous women have brought happiness and well-being upon their families and their Ummah!? And how many corrupt young men have brought every form of misfortune and trial upon this Ummah!?

Therefore, it is upon the parents who have intellect to accept whatever Allah’s(swt) gift is with full joy and happiness, whether the gift is male or a female. Since its being a male or being a female is due only to Allah’s(swt) order alone – He, the One free from all imperfections – and Most High says: