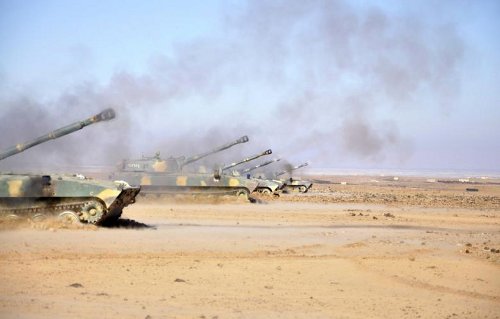 Turkey is continuing its response to a deadly Syrian mortar attack, launching artillery strikes into Syria for a second straight day while the Turkish parliament considers a measure authorizing foreign military operations.

An aide to Turkish Prime Minister Recep Tayyip Erdogan says Turkey is not interested in war with Syria, but will retaliate when necessary.

The shelling Thursday targeted the same area Turkish forces identified as the source of the Syrian mortars. Five Turkish civilians died Wednesday when the mortars landed in a residential area in Akcakale.

Turkish officials and the opposition Syrian Observatory for Human Rights say the retaliatory strikes near the Syrian border town of Tel Abyad have killed Syrian soldiers, but did not specify how many.

The measure before Turkey’s parliament says Syria has carried out “aggressive” actions against Turkish soil despite repeated warnings and diplomatic initiatives. It says there is now a need to act quickly in the face of additional risks and threats.

Turkey already has a law authorizing military intervention against separatist Kurdish rebels based in northern Iraq.

Syrian Information Minister Omran Zoabi said Damascus is investigating the origin of the mortar fire, and that Syria offers its condolences to the Turkish people.

Turkey’s Prime Minister Recep Tayyip Erdogan said Wednesday that Ankara acted within international law and will never fail to retaliate for what he called Syrian provocations against Turkey’s national security.

U.S. Secretary of State Hillary Clinton said Washington is “outraged” at the Syrian mortar strike on Turkey, a fellow member of the NATO alliance.

Turkey sent the U.N. Security Council a letter calling for “necessary action” to stop “aggression” by Syria. U.N. diplomats said the Council was discussing a possible statement in reaction to cross-border attacks.

U.N. Secretary-General Ban Ki-moon called on Syria to respect the territorial sovereignty of its neighbors. He said the escalation shows how the Syrian conflict is increasingly harming neighboring states.

The U.S. Defense Department said the Akcakale incident is another example of what it called the “depraved behavior of the Syrian regime.” It said the United States stands by Turkey as a “strong ally.”

NATO ambassadors held an urgent meeting in Brussels Wednesday at Turkey’s request, and issued a statement demanding the “immediate cessation of such aggressive acts against an ally.” NATO also urged the Syrian government to “end flagrant violations of international law.”