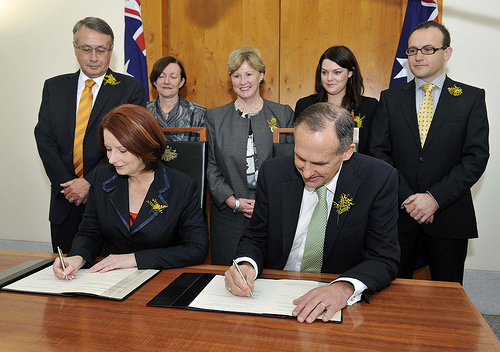 Melbourne based academic, Dr Gideon Polya, last week issued an impassioned call to African heads of state encouraging them to block Australia’s bid for a United Nations Security Council seat based on what he terms “Australia’s blind support for the Zionist-backed US War on Muslims”.

In his letter, Dr Polya, argues that Australia has a record of supporting apartheid and genocide.

Below are his comments and letter:

Anti-racist Australians who deplore Australia’s blind support for the Zionist-backed US War on Muslims (12 million Muslim deaths from violence or war-imposed deprivation since 1990) and the ongoing Palestinian Genocide by race-based, genocidal Apartheid Israel (2 million Palestinian deaths from violence or violently imposed deprivation since 1936)  must urge African nations to vote AGAINST an Australian seat on the UNSC.

Permanent Mission to the UN

The Prime Minister of Australia, Julia Gillard, is presently at the United Nations meeting African leaders to ask for their support for Australia’s bid to be elected to the Security Council wie kann ich alle icloud fotos auf meinen mac herunterladen.

I urge your country to vote AGAINST Australia’s bid for a seat on the Security Council for the following 20 extremely substantial reasons:

1. There is near-unanimous bipartisan Government and Opposition backing in Australia for Australia’s continuing position as a world leader in supporting Apartheid Israel, just as Australia in the past was a major supporter of Apartheid Israel-backed Apartheid South Africa. Israel blatantly defies UN resolutions and the International Court of Justice determinations condemning its violence, theft, and war crimes against the Indigenous people of Palestine that is described by scholars as a Palestinian Genocide – 2 million Palestinians killed since 1936 through violence  (0.1 million) or violently imposed deprivation (1.9 million); 7 million Palestinian refugees (about 5 million registered with the UN); 90% of Palestine ethnically cleansed (cf British seizure of African lands in Southern Africa and Kenya); only about 7% of 12 million Palestinians are permitted to vote for the government ruling all of Palestine; 6 million Palestinians are forbidden to even step foot anywhere in Palestine; 1.6 million Occupied Palestinians (half of them children, and of whom 10% are stunted through Israeli blockade) are indefinitely and highly abusively confined to what the Catholic Church has described as the State of Israel’s Gaza Concentration Camp; 2.5 million Occupied Palestinians are highly abusively confined to ever-dwindling West Bank Bantustans; the race-based, genocidal Israeli system  has been described by Nelson Mandela,  Archbishop Desmond Tutu and others as Apartheid; Occupied Palestinians have effectively zero human rights and Palestinian Israelis suffer under gross, Apartheid-style racist laws and restrictions.

2. Australia has an appalling secret genocide history involving 2 dozen genocidal atrocities since 1788 (nearly all against non-Europeans) that includes support for British imperialism in Africa in the colonial era, notably in the 19th century Sudan War and the South African War gif bilder öffnen herunterladen. This century, Australian SAS forces have been reportedly involved in secret military operations in Africa, presumably at the behest of the US.

5. Australia has made financial donations towards the Palestinian Genocide tax deductible while a Muslim meeting his /her zakkat religious charitable obligations by making a donation towards a Gaza orphanage could attract a punishment of up to life imprisonment under Australia’s intrinsically anti-Arab anti-Semitic, Islamophobic anti-Terrorism laws.

7. Australia has been involved since 1788 in an Aboriginal Genocide in which about 2 million Indigenous Australians have perished from violence, deprivation or introduced disease wiso steuer sparbuch steuerbescheid herunterladen. Australia also furthered the Aboriginal Genocide by the forcible removal of about 100,000 children from their mothers (the so-called Stolen Generations). About 9,000 Indigenous Australians die avoidably from deprivation each year out of an Indigenous population of 0.5 million. The avoidable death rate is 1.8 per hundred of population per year for Indigenous people in Australia, one of the world’s richest countries, as compared to 1.0 per hundred of population per year for non-Arab Africa. Australia initially refused to support the UN Declaration on the Rights of Indigenous People.

8. Australia is one of the most committed supporters of race-based Apartheid Israel in international fora, and repeatedly walked out of the UN Durban I-III anti-racism conferences over likely criticism of the genocidal, racist polices of Apartheid Israel.

9. Australia was involved in numerous atrocities committed by the British Empire in Africa, Asia and the Pacific, the most horrendous of which was the 1942-1945 WW2 Bengali Holocaust in which the British deliberately starved to death 6-7 million Indians for strategic reasons, with Australia being complicit through withholding grain from its huge war-time grain stores from starving India hvb app herunterladen. Many of the victims were Muslims and thus this atrocity also constituted a WW2 Hindu and Muslim Holocaust similar in magnitude to the WW2 Jewish Holocaust (5-6 million killed, 1 in 6 dying from deprivation).

11. Australia has participated in the Zionist-backed US War on Muslims that since 1990 has been associated with 12 million Muslim deaths from violence or from violently imposed deprivation.

12. Australia has participated in the 1990-2011 Iraqi Holocaust and Iraqi Genocide in which 4.6 million Iraqis have perished from violence (1.7 million)  or in  avoidable deaths from war-imposed deprivation ( 2.9 million), these estimates being consonant with under-5 infant deaths totaling 2.0 million, 90% avoidable and due to US Alliance war crimes in gross violation of the Geneva Convention.

13. Australia has participated in the 2001-2012 Afghan Holocaust and Afghan Genocide in which 5.6 million Afghans have perished from violence (1.4 million)  or in  avoidable deaths from war-imposed deprivation ( 4.2 million), these estimates being consonant with under-5 infant deaths totaling 2.9 million, 90% avoidable and due to US Alliance war crimes in gross violation of the Geneva Convention.

14. Australia has participated in mass paedocidal  and  mass infanticidal war crimes in both Iraq and Afghanistan involving the avoidable deaths of under-5 year old infants in these countries totaling  about 1.8 million and 2.6 million, respectively, and in gross violation of Articles 55 and 56 of the Geneva Convention relative to the Protection of Civilian Persons in Time of War which both unequivocally state that an Occupier must supply its conquered subjects with life-sustaining food and medical requisites “to the fullest extent of the means available to it” herunterladen. The World Health Organization (WHO) informs that the “annual per capita total health expenditure” is US$69 in US Alliance- and Australia-occupied Afghanistan as compared to US$3,382 for Occupier Australia.

15. Australia is complicit in the Iraqi Genocide over which Nobel Laureates Archbishop Desmond Tutu and Jewish British writer Harold Pinter have demanded war crimes trials for the main perpetrators, Bush and Blair. However the lesser collaborators, notably nearly all Australian Labor and Coalition politicians, are also complicit in this horrendous war crime (4.6 million dead since 1990) and should also face the International Criminal Court.

16. The Australia- and US-backed, racist Zionist-effected Palestinian Genocide and the Australia- and racist Zionist- backed US War on Muslims has generated about 20 million  Muslim refugees,  the breakdown being 7 million Palestinians, 5-6 million Iraqis, 3-4 million Afghans, 2 million Somalis and 1 million Libyans on which page you can music for free. For over a decade Australia has been indefinitely  imprisoning  such refugees, including women and children,  in remote concentration camps and has, with bipartisan support, now resumed an obscene, racist, human rights-violating  policy of highly abusively imprisoning  such refugees in remote Pacific Island states (Papua New Guinea and Nauru).

17. The White Australia Policy excluded non-Europeans from a White Australia between 1901 and 1974. However a New White Australia Policy is in force that means that White or rich “Honorary White” visa applicants can apply rapidly and without fuss by electronic means whereas non-Whites (and citizens of some poor White countries) must apply by a separate form, in an onerous process and with different, discriminatory criteria being applied. Despite public protests to the contrary, Australia has entrenched racism that at best can be described as politically correct racism (PC racism)  involving declaration of “love” for the victims of Australia-complicit discrimination, indefinite imprisonment, war, invasion, occupation, and genocide.

18. Australian Mainstream media, politicians and academics are responsible for largely hiding this appalling record from the Australian people through lying by omission, lying by commission and censorship i.e herunterladen. Australia is involved not just in horrendous holocaust complicity and genocide complicity but also in repugnant holocaust ignoring, holocaust denial, genocide ignoring and genocide denial.

19. Australia is one of the world’s worst countries for annual per capita greenhouse gas (GHG) pollution, Australia’s Domestic annual per capita GHG pollution of 30 tons per person per year being about 33 times that of climate change-threatened Bangladesh (0.9). Both the Labor Government and the Coalition Opposition (collectively supported by about 80% of the voting population) have the same pro-pollution policy of a derisory 5% off 2000 GHG pollution by 2020 and unlimited coal, gas and iron ore exports. This means that Australia’s Domestic plus Exported GHG pollution has risen from 1,182 million tones CO2-e in 2000 to 1,708 million tones CO2-e in 2010, and will inexorably rise to an estimated 2,571 million tones CO2-e by 2020 uber fahrer app herunterladen. The WBGU, that advises the German Government on climate change, in 2009 estimated that for a 75% chance of avoiding a disastrous 2 degree Centigrade temperature rise (at the current post-1900 temperature rise of +0.8 degrees Centigrade all the Arctic summer sea ice will disappear by 2015 according to Professor Peter Wadhams of Cambridge University) the whole World can emit no more than 600 billion tones of CO2 between 2010 and zero emissions in 2050. Australia had already used up its “fair share” by 2011 and is committed to using up THREE (3) times the whole World’s terminal CO2 pollution budget. Unaddressed climate change in which climate criminal Australia is disproportionately complicit is predicted to kill about 10 billion people this century, this including roughly twice the present population of particular mainly non-European groups, specifically 6 billion under-5 year old infants, 3 billion Muslims in a terminal Muslim Holocaust, 2 billion Indians, 1.3 billion non-Arab Africans, 0.5 billion Bengalis, 0.3 billion Pakistanis and 0.3 billion Bangladeshis.

20. Australian oligopoly media (70% of newspaper readership is dominated by the US Murdoch media empire) are involved in lying by omission, lying by commission and censorship. The taxpayer-funded Australian Broadcasting Corporation (the  ABC, the Australian equivalent of the UK BBC) has an appalling record of censorship as does the taxpayer-funded,  universities-backed, academic-based web magazine The Conversation (backed by the University of Melbourne, Monash University, the University of Western Australia, the University of Technology Sydney, RMIT University and CSIRO). This censorship keeps decent, ordinary Australians in the dark and prevents decent anti-racist Australians from informing their fellow citizens about these appalling crimes of Neocon American and Zionist Imperialist-perverted Australian governments. Holocaust ignored and genocide ignored yields holocaust repeated and genocide repeated.

African nations, and indeed all nations, should not only oppose a  seat on the Security Council  for the genocide-complicit, US lackey,  Apartheid Israel lackey, war criminal,  climate criminal, and PC racist  Australian political Establishment  – they should also press for the arraignment before the International Criminal Court of all Australian Labor and Coalition politicians complicit in these appalling crimes against Humanity.

The views expressed in this piece are the author’s and do not necessarily reflect those of MuslimVillage.com.