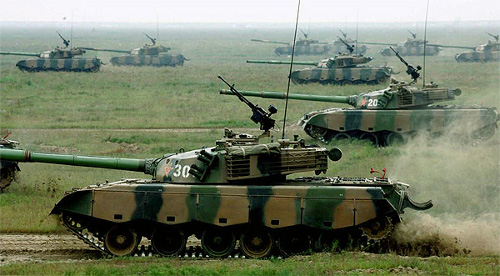 If Israel, unilaterally or with support from the United States, attacks Iran to disrupt its nuclear program, it could have the unintended consequence of destabilizing the Caucasus and emboldening Russia.

Last week, the European Union Monitoring Mission in the area reported a “buildup of Russian Federation armed personnel” along the South Ossetian border with Georgia. The former Georgian province, which has a majority ethnic Russian population, seceded in 1990 and was recognized as an independent state by Moscow after a brief war in 2008.

The increase in Russian troop presence may have to do with the fact, as Robert Bruce Ware writes at Antiwar, that Russia expects a strike against Iran before the end of this year and sees an opportunity to strengthen its position in the region.

Russia, for its part, has accused Georgia of fortifying the border, apparently laying the groundworks for what could serve as an excuse for an invasion. But the aim isn’t Georgia, as much as one can imagine that Russian president Vladimir Putin would welcome the chance to humiliate his Georgian counterpart Mikheil Saakashvili, again.

Neighboring Armenia, which has poor relations with the more pro-Western Azerbaijan, Georgia and Turkey, depends heavily on Iran for oil and gas imports and could see an influx of refugees which will exacerbate tensions in the South Caucasus. Armenian energy supplies will likely be cut if there is war while Azerbaijan, which is engaged in its own power struggles with Iran, could take advantage of the situation to reclaim the disputed territory of Nagorno-Karabakh.

Under such circumstances, Ware believes that Russia will uphold its obligations to Armenia under the Collective Security Treaty Organization and cut a military corridor through Georgia to be able to take control of the oil and natural gas pipelines running west from the Caspian Sea. “If this is combined with fighting in the Persian Gulf, energy prices may spike.”

Because Russia controls the Baku-Novorossiysk pipeline, the West’s only other energy corridor from rich Caspian hydrocarbon fields, Russian control of nearly all Caspian energy, together with fighting in the Persian Gulf, could lead to unprecedented energy costs and economic instability in the West.

The European Commission has been in talks with Azerbaijan and Turkmenistan since last year with the aim of importing natural gas from the Caspian Sea region through Turkey which would dilute Russia’s virtual monopoly on gas transit in the region.

The South Caucasus Pipeline, which has been operational since 2006 and carries gas from Azerbaijan’s Shah Deniz field via Georgia into Turkey, is supposed to link up with the planned Nabucco pipeline but the latter’s construction is far from certain.

Turkish energy minister Taner Yıldız this month announced that his country, which previously worked with the Russians to construct the Blue Stream pipeline in the Black Sea, would back the construction of the Trans-Caspian and Trans-Anatolian gas pipelines which, if built, will reduce European dependence on Russian export infrastructure.

Even if Ankara is aligning with Azerbaijan and Europe, in the short term, Russian control of the existing pipelines in the South Caucasus following a military incursion would significantly inhibit the European Union’s room for maneuver both in its energy politics in the Caucasus and response to an American or Israeli strike on Iran. The bloc receives some 25 percent of its gas from Russia.