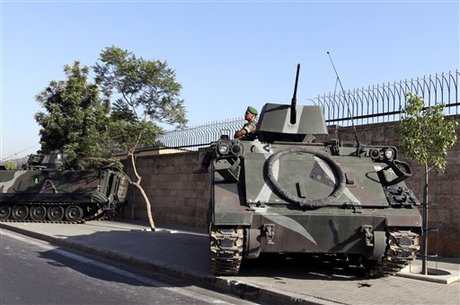 LONDON — Leaders of the Muslim community in France have expressed their anger after a French magazine published caricatures of the Prophet Muhammad. Amid fears of a backlash over the cartoons, the French government has responded by planning to close schools and embassies in Muslim countries.

On the front cover of Wednesday’s publication, a French satirical magazine showed a cartoon of an orthodox Jew pushing the Prophet Muhammad in a wheelchair. On the inside pages, the prophet is depicted naked in a number of caricatures.

French authorities sent riot police protection to the offices of the weekly magazine, Charlie Hebdo, amid fears of a reprisal. The government also said it would temporarily close French embassies, consulates, cultural centers and schools in 20 countries Friday as a precaution, in case protests break out after weekly Muslim prayers.

French Prime Minister Jean-Marc Ayrault called for calm and said freedom of expression is guaranteed in France. He said those who are offended by the cartoons should turn to French courts to resolve the issue legally.

Last year, the satirical magazine published an edition that it described as having been “guest edited” by the Prophet Muhammad. Its offices were later firebombed.

One of the magazine’s cartoonists, who works by the name Tignous, defended the cartoons. It is just a drawing, he said. It is not a provocation.

But the publication comes while anger is widespread in many Muslim communities over an overtly offensive, low-budget Internet video produced by an extremist in the United States. In the backlash following the video’s release, some two dozen people have been killed, including the U.S. ambassador to Libya.

French Muslim leaders called for calm after meeting with the country’s Interior Minister. The President of the French Council of Muslims, Mohammed Moussaoui, described the “indignation” and “anger” Muslims feel, but said the response would be “serene.”

He said Muslims would not respond to provocation. He said that French authorities, however, should send out strong messages to appease and reassure Muslims that they have a right to the same respect as their fellow citizens.

Last Saturday, police in the French capital Paris made dozens of arrests at an unauthorized protest near the U.S. embassy, which drew about 150 people.

Ayrault told French radio that authorities had rejected a request to hold a further demonstration this coming Saturday.