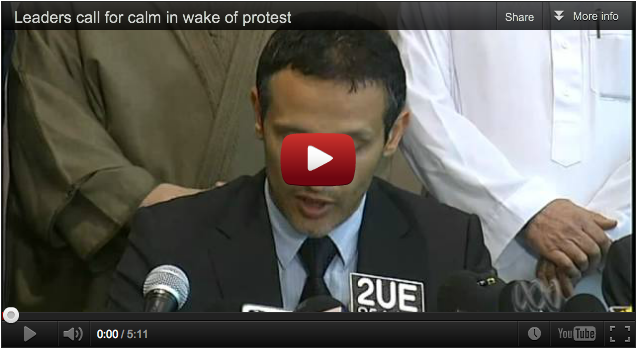 The following statement has been released in a press conference this morning outside the LMA offices in Sydney to representatives of Media and has been endorsed by the majority of Muslim community leaders in Sydney.

MUSLIM LEADERS MEET IN RESPONSE TO SATURDAY’S INCIDENT IN SYDNEY

Several Muslim representatives and religious leaders met again last night to discuss the events that occurred on Saturday in Sydney. This was the second meeting by community leaders concerned about what had happened. After the first meeting on Saturday night a media statement was released condemning in unequivocal terms the violence that occurred as well as the offensive film at the centre of the conflict.

Those present at last night’s meeting came from a wide cross section of Sydney’s very diverse Muslim community and included representation from the office of The Grand Mufti of Australia, the Islamic Council of NSW, Lakemba, Belmore, Liverpool and other Mosques, as well as women and youth organisations.

The meeting was productive and demonstrates the seriousness with which community representatives are treating the situation.

As a result of the meeting, community representatives would like to make the following statement:

Thank you and peace be with you. END