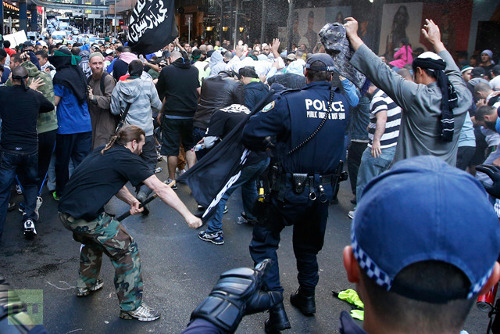 Leaders from Australia’s Islamic community have released a joint media statement that condemns the violence witnessed at a protest in  Sydney yesterday, calling on the community to show wisdom and patience.

Media Release: Statement from Leaders of the Australian Islamic Community regarding the protest in Sydney

Leaders of Australia’s Islamic community condemn the violent scenes that were seen on the streets of Sydney yesterday.

The protest was not sanctioned or authorised by any Islamic organisation.

Accordingly, we condemn in the strongest possible terms, the provocative and offensive content of the film depicting the Prophet Muhammad that was recently released.

However, such insults do not provide individuals with the right to react violently against others and retaliate in a manner as was demonstrated by a few of the protesters yesterday.

Although we understand that many in the world are deeply offended by the release of the offensive film, we call upon the community to react in a manner that exemplifies the noble character of the Prophet Muhammad and the spirit of Islam by exercising wisdom and patience.

Statement on behalf of:

Office of The Mufti of Australia