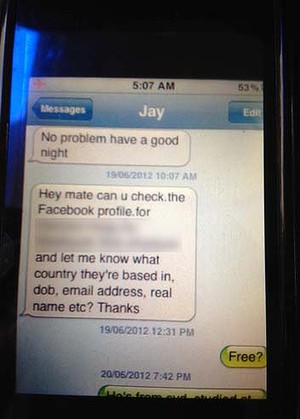 AN ASIO officer may have inadvertently endangered a Melbourne man helping him spy on the Islamic centre raided in the city’s south-east this week, after their secret conversations were outed on social media.

The outing of their intelligence relationship is an embarrassment for ASIO and may anger some in the Muslim community who believe they are unfairly targeted by the government because of their religion.

It is also believed to be the reason behind the decision to launch the raids on Wednesday, as the text messages, revealed about two weeks ago, tipped off the al-Furqan members that they were subject to a government investigation.

Part of text conversations between the alleged source X and his handler, said to be an ASIO officer. These conversations were posted on social media sites by men associated with the Al Furqan centre after X was bashed and his phone had been taken. Photo: Supplied

The Melbourne man, whom the Heraldwill call X out of regard for his safety, had been providing information to an ASIO officer identified only as ”Jay” via text messages on his smartphone.

But their relationship was exposed a fortnight ago, when X was bashed and had his phone taken. Later, a group of men associated with the al-Furqan centre took photos of text messages on his phone and posted them on the centre’s website, on Facebook and other sites.

While it remains unclear exactly what happened when the phone was taken, a Facebook commenter wrote: ”the brother took the phone, after a sufficient evidence was presented (even this spy admitted to him that he is working for asio).”

The texting sparked outrage among the al-Furqan centre’s members, with its leader, Harun Mehicevic, also known as Sheikh Harun and Abu Talha, giving an address recorded on the internet about the ”spying”.

Mr Mehicevic said the messages revealed ”a spynet of Muslims spying for ASIO, spying for kafir [unbelievers], on Muslims”.

Yesterday, a 23-year-old man arrested during the raids appeared in a Melbourne court charged with four counts of collecting or making documents likely to facilitate terrorist acts.

A total of 60 photos were posted on the web showing X’s text conversation with Jay between May and August this year. They reveal an avuncular, informal conversation peppered with text-speak at odds with the serious information being gathered.

”How important is that you know who jihad salafiyyah is? Cos I know lol,” X messaged on July 22 regarding an online profile.

Like other agencies that use human sources, ASIO would have strict guidelines on how to manage people who provide it with intelligence to prevent their being discovered.

The head of the intelligence watchdog that oversees ASIO operations, Inspector-General of Intelligence and Security, Vivienne Thom, said she could not comment on whether her office was investigating the breach. ASIO also would not comment.

ASIO is Australia’s chief domestic security and intelligence agency and is responsible for protecting the country from a variety of threats, including terrorism. Its collection division is responsible for running an extensive array of human sources – people who provide information, often in return for money.

Jay is likely to be attached to the Victorian Joint Counter-Terrorism Team, which includes members of Victoria Police, the federal police and ASIO.

While ASIO, Victoria Police and the federal police would not confirm it, the Herald has established Jay works for ASIO.

Several sources said police would not correspond with a registered source via text, given its relative insecurity and the potential for such co-operation to be revealed.