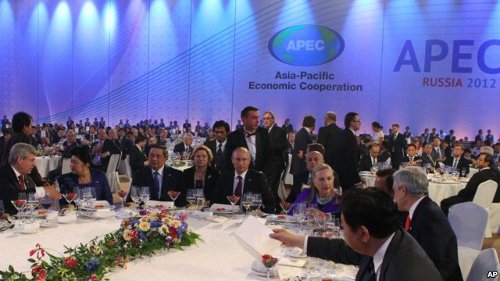 Secretary of State Hillary Clinton says the United States will continue to work outside the United Nations if Russia and China keep blocking U.N. action.

A senior U.S. official says Secretary Clinton came to her meetings with Russian officials on the sidelines of the Asian-Pacific Economic Cooperation forum hoping to convince them to reconsider Russia’s opposition to stiffer penalties against President Assad as part of efforts to push him toward political transition.

That did not happen. Secretary Clinton says she and Foreign Minister Sergei Lavrov did discuss putting forward at the U.N. a Syria transition plan that China and Russia backed at talks in Geneva earlier this year.

Secretary Clinton said, “That will only be effective if it includes consequences for non-compliance. There is no point passing a resolution with no teeth because we’ve seen time and time again that President Assad will ignore it and keep attacking his own people.”

Russia and China have three times vetoed U.N. Security Council resolutions that would have sanctioned President Assad if he failed to agree to a cease-fire, the release of political prisoners, and a political transition.

Lavrov says the United States has a tendency to threaten and isolate countries that it is having issues with instead of engaging them. He says that is an approach to Syria that Russia fundamentally opposes.

The foreign minister says unilateral U.S. sanctions against Syria appear more and more extra-territorial and have a direct impact on Russian business interests, especially banks. He says Moscow has made clear that this approach is not acceptable.

Unable to convince Russian leaders to change their minds on Syria, Secretary Clinton says she will continue to try to make progress ahead of the U.N. General Assembly later this month.

“But we have to be realistic. We haven’t seen eye-to-eye with Russia on Syria. That may continue. And if it does continue, then we will work with like-minded states to support the Syrian opposition to hasten the day when Assad falls,” says Clinton.

The United States is part of that so-called “Friends of Syria” group but has so far limited its involvement to non-lethal assistance. Other members of the group are helping arm Syrian rebels.

A senior U.S. official says Secretary Clinton told Foreign Minister Lavrov that the Security Council risks “abrogating its responsibility” if it fails to act to stop the violence.

Russia cricial of US actions

Lavrov says the United States can not talk about “international unity” on Syria when it is Washington that is acting on its own.

The foreign minister says the United States decided to act by itself without Russia. Now, a year and and half later, when those unilateral sanctions are not working, Washington is trying to blame Russia and China for blocking sanctions and resisting the international community.

Lavrov says “you need to think first from the very beginning here and not try to portray this unity as the demand for everybody else to join something that somebody decided single-handedly without any discussions.”

There have been discussions about the Syrian conflict. Russia and China backed the appointment of a joint U.N. – Arab League mediator but both oppose more direct involvement.