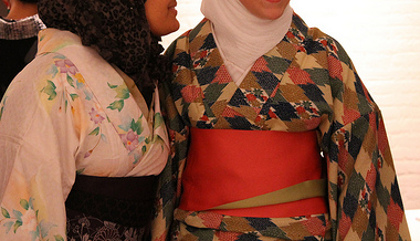 When I reverted to Islam, the religion of our inborn nature, a fierce debate raged about girls observing the hijab at schools in France. It still does. The majority, it seemed, thought that wearing the headscarf was contrary to the principle that public – that is state-funded – schools should be neutral with regard to religion. Even as a non-Muslim, I could not understand why there was such a fuss over such a small thing as a scarf on a Muslim student’s head. The feeling still persists amongst non-Muslims that Muslim women wear the hijab simply because they are slaves to tradition, so much so that it is seen as a symbol of oppression. Women’ s liberation and independence is, so they believe, impossible unless they first remove the hijab.

Such naivet is shared by “Muslims” with little or no knowledge of Islam. Being so used to secularism and religious eclecticism, pick and mix, they are unable to comprehend that Islam is universal and eternal. This apart, women all over the world, non-Arabs, are embracing Islam and wearing the hijab as a religious requirement, not a misdirected sense of “tradition.”

I am but one example of such women. My hijab is not a part of my racial or traditional identity; it has no social or political significance; it is, purely and simply, my religious identity.

I have worn the hijab since embracing Islam in Paris. The exact form of the hijab varies according to the country one is in, or the degree of the individual’s religious awareness. In France I wore a simple scarf, which matched my dress and perched lightly on my head so that it was almost fashionable! Now, in Saudi Arabia, I wear an all-covering black cape; not even my eyes are visible. Thus, I have experienced the hijab from its simplest to its most complete form.

What does the hijab mean to me? Although there have been many books and articles about the hijab, they always tend to be written from an outsider’s point of view; I hope this will allow me to explain what I can observe from the inside, so to speak. When I decided to declare my Islam, I did not think whether I could pray five times a day or wear the hijab. Maybe I was scared that if I had given it serious thought I would have reached a negative conclusion, and that would affect my decision to become a Muslim. Until I visited the main mosque in Paris I had nothing to do with Islam; neither the prayers nor the hijab were familiar to me. In fact, both were unimaginable but my desire to be a Muslim was too strong (Alhamdulilah) for me to be overly concerned with what awaited me on the “other side” of my conversion.

The benefits of observing hijab became clear to me following a lecture at the mosque when I kept my scarf on even after leaving the building. The lecture had filled me with such a previously unknown spiritual satisfaction that I simply did not want to remove it. Because of the cold weather, I did not attract too much attention but I did feel different, somehow purified and protected; I felt as if I was in Allah’s company.

As a foreigner in Paris, I sometimes felt uneasy about being stared at by men. In my hijab I went unnoticed, protected from impolite stares.

My hijab made me happy; it was both a sign of my obedience to Allah and a manifestation of my faith. I did not need to utter beliefs, the hijab stated them clearly for all to see, especially fellow Muslims, and thus it helped to strengthen the bonds of sisterhood in Islam.

Wearing the hijab soon became spontaneous, albeit purely voluntary. No human being could force me to wear it; if they had, perhaps I would have rebelled and rejected it. However, the first Islamic book I read used very moderate language in this respect, saying that “Allah recommends it (the hijab) strongly” and since Islam (as the word itself indicates) means we are to obey Allah’s will I accomplished my Islamic duties willingly and without difficulty, Alhamdulilah.

The hijab reminds people who see it that God exists, and it serves as a constant reminder to me that I should conduct myself as a Muslim. Just as police officers are more professionally aware while in uniform, so I had a stronger sense of being a Muslim wearing my hijab.

Two weeks after my return to Islam, I went back to Japan for a family wedding and took the decision not to return to my studies in France; French literature had lost its appeal and the desire to study Arabic had replaced it. As a new Muslim with very little knowledge of Islam it was a big test for me to live in a small town in Japan completely isolated from Muslims. However, this isolation intensified my Islamic consciousness, and I knew that I was not alone as Allah was with me.

I had to abandon many of my clothes and, with some help from a friend who knew dressmaking; I made some pantaloons, similar to Pakistani dress. I was not bothered by the strange looks the people gave me!

After six months in Japan, my desire to study Arabic grew so much that I decided to go to Cairo, where I knew someone. None of my host family there spoke English (or Japanese!) and the lady who took my hand to lead me into the house was covered from head to toe in black. Even her face was covered. Although this is now familiar to me here in Riyadh, I remember being surprised at the time, recalling an incident in France when I had seen such dress and thought, there is a woman enslaved by Arabic tradition, unaware of real Islam, (which, I believed, thought that covering the face was not a necessity, but an ethnic tradition).

I wanted to tell the lady in Cairo that she was exaggerating in her dress,that it was unnatural and abnormal. Instead, I was told that my self-made dress was not suitable to go out in, something I disagreed with since I understood that it satisfied the requirements for a Muslimah. But, when in Rome, I bought some cloth and made a long dress, called khimar, which covered the loins and the arms completely. I was even ready to cover my face, something most of the sisters with whom I became acquainted did. They were, though, a small minority in Cairo.

Generally speaking, young Egyptians, more or less fully westernized, kept their distance from women wearing khimar and called them the sisters. Men treated us with respect and special politeness. Women wearing a khimar shared a sisterhood which lived up to the Prophet’s saying (Allah’s blessings and peace on him) that a Muslim gives his salaam to the person he crosses in the street, whether he knows him or not. The sisters were, it is probably true to say, more conscious of their faith than those who wear scarves for the sake of custom, rather than for the sake of Allah. Before becoming a Muslimah, my preference was for active pants-style clothes, not the more feminine skirt, but the long dress I wore in Cairo pleased me; I felt elegant and more relaxed.

In the western sense, black is a favourite colour for evening wears as it accentuates the beauty of the wearer. My new sisters were truly beautiful in their black khimar and with a light akin, to saintliness shone from their faces. Indeed, they are not unlike Raman Catholic nuns, something I noticed particularly when I had occasion to visit Paris soon after arriving in Saudi Arabia.

I was in the same Metro carriage as a nun and I smiled at our similarity of dress. Hers was the symbol of her devotion to God, as is that of a Muslimah. I often wonder why people say nothing about the veil of the Catholic nun, but criticize vehemently the veil of a Muslimah, regarding it as a symbol of terrorism and oppression.

I did not mind abandoning colourful clothes in favour of black; in fact, I had always had a sense to longing for the religious lifestyle of a nun even before becoming a Muslimah!

After another six months in Cairo, however, I was so accustomed to my long dress that I started to think that I would wear it on my return to Japan. My concession was that I had some dresses made in light colours, and some white khimars, in the belief that they would be less shocking in Japan than the black variety.

I was right. The Japanese reacted rather well to my white khimars, and they seemed to be able to guess that I was of a religious persuasion. I heard one girl telling her friend that I was a Buddhist nun; how similar a Muslimah, a Buddhist nun and a Christian nun are! man who would not normally be accustomed to talking about religion.

My father was worried when I went out in long sleeves and a head-cover even in the hottest weather, but I found that my hijab protected me from the sun. Indeed, it was I who also felt uneasy looking at my younger sister’s legs while she wore short pants.

Muslims are accused of being over-sensitive about the human body but the degree of sexual harassment which occurs these days justifies modest dress. Just as a short skirt can send the signal that the wearer is available to men, so the hijab signals, loud and clear: I am forbidden for you.

The Prophet once asked his daughter Fatima, “What is the best for a woman? And she replied: Not to see men and not to be seen by them. Having married, I left Japan for Saudi Arabia, where it is customary for the women to cover their faces outdoors. I was impatient to try the niqab (face cover), and curious to know how it felt. Of course, non-Muslim women generally wear a black cloak, rather nonchalantly thrown over their shoulders, but do not cover their faces; Non-Saudi Muslim women also often keep their faces uncovered.

My first niqab left my eyes uncovered. But in winter I wore a fine eye-covering as well. It is an error of judgment to think that a Muslim woman covers herself because she is a private possession of her husband. In fact, she preserves her dignity and refuses to be possessed by strangers. Observing the hijab from outside, it is impossible to see what it hides. The gap, between being outside and looking in, and being inside and looking out, explains in part the void in the understanding of Islam. An outsider may see Islam as restricting Muslims. Inside, however, there is peace, freedom, and joy, which those who experience it have never known before.

Practising Muslims, whether those born in Muslim families or those reverted to Islam, choose Islam rather than the illusory freedom of secular life. If it oppresses women, why are so many well-educated young women in Europe, America, Japan, Australia, indeed all over the world, abandoning liberty and independence and embracing Islam?

A person blinded by prejudice may not see it, but a woman in hijab is as brightly beautiful as an angel, full of self-confidence, serenity, and dignity.