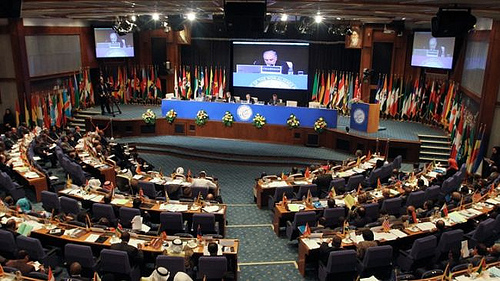 Iran’s Supreme Leader says his country is not pursuing nuclear weapons but will not give up its national right for peaceful use of nuclear energy.

The International Atomic Energy Agency said Iran has more than doubled the production capacity of its uranium enrichment program at a secure underground site known as Fordo.

The U.N. agency also said in a report Thursday that “extensive activities” – referring to an alleged purge of clean-up evidence – at Iran’s Parchin military complex would hinder its ability to investigate the scope of Iran’s nuclear work.

On Wednesday, the U.N. watchdog announced that it had created a task force to investigate Iran’s nuclear program.

The enrichment is controversial because it brings uranium to a level close to what is needed to build a nuclear weapon. Iran says the program is for peaceful purposes and the enriched uranium is needed for medical research.

But the United States, Israel and other some countries believe Iran is secretly trying to build nuclear weapons.

Iran has been seeking to use its previously-scheduled three-year leadership of the Non-Aligned Movement to gain support for its policy on nuclear enrichment, and for its opposition to Israel and the West.

The supreme leader’s speech also took aim at the U.N. Security Council, describing it as illogical, unjust and a defunct relic of the past that the United States uses “to impose their bullying manner on the world.”

In remarks at the same conference, U.N. Secretary-General Ban Ki-moon called on Iran to ease concerns by “fully complying” with Security Council resolutions and cooperating with the IAEA.  Iran is under a series of U.N. sanctions for defying Council resolutions on its enrichment program.

Officials say that at a private meeting Wednesday, the secretary-general called on Iranian leaders to take “concrete” steps to address international concerns about its nuclear program, as speculation grows of a possible Israeli airstrike on Iran’s enrichment facilities.

Ban called on both Iran and Israel to tone down their rhetoric.

The U.N. Security Council has rejected Iran’s assurances of a peaceful nuclear program in the absence of inspections and an agreement not to enrich uranium beyond a middle level of purity.

The Non-Aligned Movement was organized during the Cold War to provide a forum for countries that were allied with neither the United States nor the Soviet Union. But since the Soviet Union was dissolved in 1991 the grouping has struggled for both identity and clout.

Iran faced some critical comments at the summit on Thursday on issues besides its nuclear program.

Egyptian President Mohamed Morsi launched a sharp attack on Iran’s ally Syrian President Bashar al-Assad, saying he leads an “oppressive” regime that has lost its legitimacy. The Syrian delegation walked out in protest.

And he struck a popular Non-Aligned Movement theme by calling for a greater voice for developing countries on world issues. But he also called for action on issues in which Iran is involved.

“These include international terrorism, proliferation of weapons of mass destruction, the menace of maritime piracy, the growing threat to cyber security and the growing challenge of pursuing ecologically sustainable development,” Singh said.

Iran expert Mark Fitzpatrick of London’s International Institute for Strategic Studies says Iran will get some benefit from its leadership of the Non-Aligned Movement, but as Thursday’s session illustrated, the benefits will be limited.

“I think Iran will be able to utilize its leadership of the NAM in ways favorable to Iran’s foreign policy,” he said. “But whether this means that Iran can persuade other countries in the NAM to take steps that they wouldn’t otherwise take, these are just ‘talk shops.’ They don’t have any practical impact.”

Fitzpatrick says having 120 countries represented at the meeting, with more than two dozen heads of state and government, does at least temporarily ease Iran’s diplomatic isolation.

But he and other experts say it was bound to be difficult for Iran to convince so many diverse countries to adhere to its policy agenda, particularly when most of the countries are participating in the sanctions and many have voted against Iran at U.N. nuclear watchdog meetings.

VOA’s Al Pessin contributed to this report from London.

Some information for this report was provided by AP, AFP and Reuters