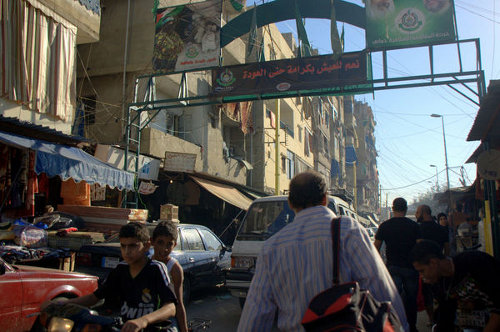 BEIRUT — A half million Palestinian refugees are registered in Syria and slightly fewer in Lebanon.  Most have remained in Syria, but with the escalation of fighting in and around their camps last month, hundreds of Palestinian families began seeking safer havens in neighboring Lebanon.

Many of the Palestinian families who have come to Lebanon are staying in the Shatilla refugee camp.

Forty-year old Rajaa Hashem, is one of them.  She says she feared for the safety of her five children in Damascus. “After the war planes and the shelling and killing, I took my children and I came here,” she said. “We could not bear this situation anymore.”

After her neighbor was killed in an explosion she decided it was time to go. “He was torn into pieces and died like the rest of the people.  Now, I don’t know, they say they have killed our neighbors and the cousins of my husband,” she explained. “Some of them are injured and some others killed.”

Hoda Samra, the spokesperson in Lebanon for the United Nations Relief and Works Agency, UNRWA, says more than 3,000 Palestinians from Syria have registered in Lebanon — many since mid-July, when fighting escalated in their areas. “There might be higher numbers or people who have not approached UNRWA, but those who have approached us so far exceed three thousand persons,” she said.

Twenty-five-year-old Omar, who did not want his face shown, is among those who have registered with the U.N. “We are receiving a little bit of aid and that’s helping us; God helps,” he said.

UNRWA’s Samra says it is very difficult for the displaced Palestinian refugees to find work, further complicating their situation. “So you can imagine what the situation is like for a person who is displaced from Syria and a refugee. So twice displaced, twice refugees, maybe. It’s not easy,” Samra added.

Many of the new arrivals live in cramped quarters, with several families in one room. Ibtisam lives with nine relatives. “We are three families staying in one room,” she explained. “What can we do? We escaped from the killing and shelling and now we are living like this.”

The Lebanese government has given the displaced refugees one-month resident visas.  But since no one knows how long the situation in Syria will continue, they worry their safe haven is only temporary.