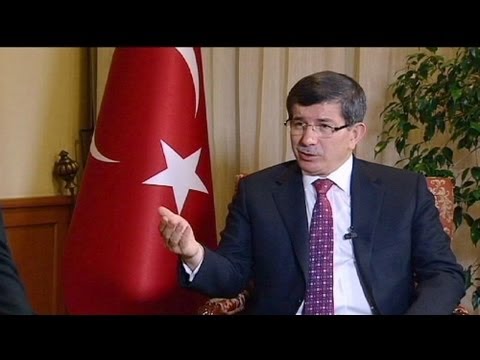 Davutoglu has called on the international community to share the burden stemming from the increasing number of Syrians taking shelter in Turkey.

The Turkish foreign minister has said Turkey would take part in the solution process of every humanitarian issue even if it happened in a remote part of the world.

“It does not matter whether it happens tens of thousands of kilometers away. Wherever there is a humanitarian issue and a violation of human rights or wherever a community that has historical ties with us faces torture, Turkey will be there,” said Foreign Minister Ahmet Davutoglu, while opening the second session of the Independent Permanent Human Rights Commission of the Organization of Islamic Cooperation (IPHRC), together with OIC Secretary-General Ekmeleddin Ihsanoglu in Ankara.

“Whenever OIC launches an initiative on these issues, Turkey will take part in it and extend the necessary support,” he also said.

The foreign minister said IPHRC had assumed a historic responsibility, underscoring that the Commission was not a technical structure, but a philosophical one.

“OIC is not a platform where only the political issues of members states are discussed. It is a wide-scale global platform where problems of the Muslim world and basic humanitarian matters are addressed,” he said.

The minister noted that Islamic world currently faced both theoretical and practical challenges. “Unless there is a revolution in minds, nothing can be achieved in practice,” he said.

Davutoglu also asserted that some circles tried to establish the perception that Islamic world and its values of civilization did not conform with universal humanitarian values. “This attitude is not fair,” he said.

“These are our values as well, they were not injected into the Islamic world from outside. Islam was substantively founded on these values,” Davutoglu said.

“The concept of human rights, both in theory and practice, is not incompatible with the fundamentals of Islamic civilization,” he continued.
Davutoglu emphasized that protection of human life, mind and property were the main principles of Islamic law.

“The mission of this Commission should be to introduce a new human rights approach,” he said, “Unless a new mentality is formed, global challenges could not be addressed.”

The foreign minister also noted that the Muslim world should be seriously evaluated in terms of the practice of human rights.

Regarding the developments in Syria, Davutoglu said Syrian people demanded intellectual freedom and the right to express their political opinions.

Pointing to OIC’s suspending Syria’s membership, Davutoglu said Syria would again participate in the organization’s activities as a prestigious member once a new administration was formed in the country in line with people’s demands.

“Turkey is not the protector of any religious group in Syria. Turkey values all religious or sectarian groups in Syria the same and considers the protection of their culture as a key human rights issue,” he also said.

Commenting on the situation in Palestine, Davutoglu said, “Every human rights violation concerning Palestine should be brought forward with the strongest voice.”

The foreign minister suggested that rapporteurs should be assigned by the OIC to examine human rights violations in Muslim countries and the organization should impose sanctions afterwards if necessary.

Pointing to the problems of Muslim minorities all over the world, Davutoglu said all Muslim minorities, whether those in the Balkans, India, Russia, China or Myanmar, were the actual owners of those territories and they had been living there for centuries.

“OIC, as a globally rising institution, should secure the presence of these minorities,” he said.

Touching on the ongoing crisis in Myanmar as well, Davutoglu said, “What happens in Myanmar is a test for all of us.”

Recalling his recent visit to Myanmar’s problematic Rakhine state, Davutoglu said he had conveyed to the Burmese government the message that Muslims living in Rakhine were a part of Myanmar.

The Turkish foreign minister has called on the international community to share the burden stemming from the increasing number of Syrians taking shelter in Turkey.

Turkish Foreign Minister Ahmet Davutoglu responded to questions of reporters during a press conference with Secretary-General Ekmeleddin Ihsanoglu of the Organization of Islamic Cooperation (OIC) in capital Ankara.
Upon a question on the Syrians fleeing the violence in their country, Davutoglu said the number of Syrians seeking shelter in Turkey had exceeded 80,000.

“Turkey, on one hand, wants to fulfill its humanitarian duty towards Syrians with whom it has historic ties of brotherhood. But on the other hand, the rising number of refugees brings a certain load. This burden has to be shared with the international community,” the minister said.

“As figures continue to increase, we are taking precautions at international level. We also invite UN mechanisms to take action,” he added.

Thanking the residents and officials of cities near the Syrian border for their efforts to accommodate Syrians, Davutoglu said it was quite normal to take precautions against social issues that might arise in the region.

He said Syrians who crossed the border without passports were accommodated in camps, while relevant residence-related procedures were applied for those holding passports.

“It is obvious that these people are not coming to Turkey as tourists. Therefore, it is normal to take several measures,” Davutoglu noted.
The minister said camps in the region were operated in line with international standards, underscoring that journalists and statesmen could visit the region freely.

Davutoglu recalled that Turkey had earlier hosted Turks from Bulgaria, Kurds from Iraq and the Bosniak from Bosnia-Herzegovina.

“When these 80,000 people, comprising of women escaping from rape, children with no parents and old people without any relatives came to our doors, should we have rejected them and sent them away to air raids and snipers?,” Davutoglu said.

Commenting on the Syrian question, OIC head Ekmeleddin Ihsanoglu stated that his organization closely monitored the developments and it would soon send field hospitals and mobile clinics to the region.

Regarding the recently broadcast video footage of Turkish cameraman Cuneyt Unal missing in Syria, the minister said he was happy to see that Unal was alive.

Davutoglu said the video clearly showed that Unal delivered a statement previously dictated to him and he could not have turned into an armed militant all of a sudden.

“The Syrian regime can declare a cameraman or an opponent a terrorist. Anyone who raises his voice against cruelty can be named a terrorist, Israeli spy or something else,” he said.

The minister also underscored that Unal’s health was now the responsibility of the Syrian state.

The Turkish foreign minister has said Muslims should defend human rights as values of the Islamic civilization.

“It is time that the Islamic world and all Muslims, both individually and collectively, stand up and defend human rights as values of our civilization all over the world,” said Foreign Minister Ahmet Davutoglu, appearing at a joint press conference with Secretary-General Ekmeleddin Ihsanoglu of the Organization of the Islamic Cooperation (OIC) in the Turkish capital.

Speaking to reporters following the second session of the OIC Independent Permanent Human Rights Commission (IPHRC), Davutoglu pointed out to the rising demands for democracy and human rights in Islamic societies.
The minister said the Commission’s activities would constitute an important opportunity for the realization of such demands.

“Our main expectation from the Commission is to establish the understanding that the concept of human rights is not in contradiction, but in conformity with fundamental values of the Islamic civilization, and that Muslims should be the leading defenders of human rights,” Davutoglu said.
“This is a revolution of mentality. A new perception is needed in the world,” he continued.

Davutoglu also said IPHRC should not remain a commission only, but turn into a human rights institution of the Islamic world just like the structure within the Council of Europe.

“We are ready to extend all kinds of support to achieve this goal,” he said.
OIC head Ihsanoglu said in his part that high international standards in human rights could not be achieved in a day, but objectives could be accomplished gradually.