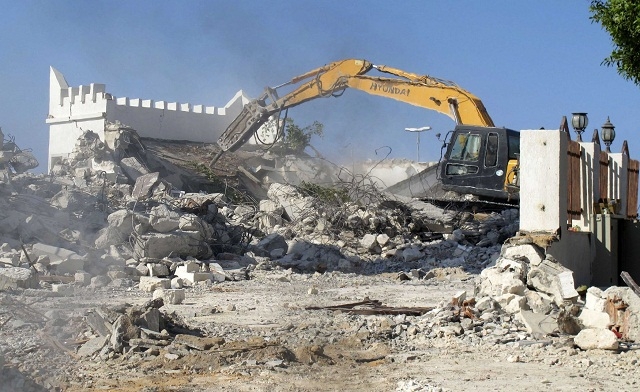 The Libyan interim interior minister has resigned, after members of the newly-elected parliament accused his ministry of not doing enough to stop attackers who bulldozed a mosque and the shrine housing the grave of the great Malaiki Scholar Sheikh Ahmed Zarooq.

Abdel-Moneim al-Hurr, the spokesman for Libya’s security services, said that the interior minister’s resignation had been accepted by both the prime minister and parliament.

Hurr said that 17 people had been arrested in connection with the desecration of the Sufi shrine.

The attackers destroyed the mosque, which contained Sufi Muslim graves in the centre of Tripoli, a day after Sufi shrines in the city of Zlitan were wrecked and a mosque library was burned.

The demolition of the large Sha’ab mosque happened in broad daylight on Saturday, drawing condemnation from government officials and Libyans across the country and abroad.

In Zlitan, witnesses said that an armed group, claiming to be Salafis, carried out the assault on the Sufi shrine, the tomb of Abdel Salam al-Asmar, a 15th-century Muslim scholar.

The president of Libya’s newly elected National Congress, Mohamed al-Magariaf, called the prime minister to an emergency meeting on Sunday.

“What is truly regrettable and suspicious is that some of those who took part in these destruction activities are supposed to be of the security forces and from the revolutionaries,” Magariaf told reporters on Saturday night.

He did not elaborate on how security forces took part.

A public protest was planned for Sunday at the Algeria Square in Tripoli, calling for support against “the lawless minority” that carried out the attacks.

A Reuters reporter saw the bulldozer level the Sha’ab mosque as police surrounded the site and prevented people from approaching and did not stop the demolition. Inside the mosque, empty graves lay open in the rubble.

“A large number of armed militias carrying medium and heavy weapons arrived at the al-Sha’ab mosque with the intention to destroy the mosque because of their belief graves are anti-Islamic,” a government official said.

He told Reuters that authorities tried to stop them but, after a small clash, decided to seal off the area while the demolition took place to prevent any violence spreading.

A man who appeared to be overseeing the demolition told Reuters the interior ministry had authorised the operation after discovering people had been worshipping the graves and practising “black magic”. The ministry was not available for comment.

“A group of criminals who have committed crimes against people inside and outside Zliten, entered and took cover in the mosque and fired at the revolutionaries,” Mohamed al-Teer, a witness, said.

“The revolutionaries fired back. They killed and captured some of them and the others escaped.”

The attackers also set fire to a historic library, reducing years of academic and religious writing to ash. While the official line from the government is condemnation, there are reports security forces stood by and just let this destruction go ahead.

One of Libya’s highest-profile cultural clashes since the toppling of Muammar Gaddafi has been between followers of the mystical Sufi tradition and ultra-conservative Salafis, who say Islam should return to the simple ways followed by its prophet.

Salafis have formed a number of armed brigades in Libya. They reject as idolatrous many Sufi devotions – which include dancing and the building of shrines to venerated figures.

The Sha’ab mosque in Tripoli housed close to 50 Sufi graves inside and, outside, the tombs of Libyan Sufi scholar Abdullah al-Sha’ab and a martyr who fought Spanish colonialists.

Who was Shaykh Ahmed Zarooq?

Shah Abdul Aziz Dehlwi (Allah be pleased with him), in his book, “Bustaanul Muhaditheen”, praises ShaykhAhmed Zarooq by describing him as follows:

“This great Saint is also among the Abdaal Sab’a (The Seven Magnificent Abdaal) and is an authority amongst the Sufis. Among his illustrious students are personalities like Imaam Shamsudeen Lagaani and Imaam Shahabudeen Qastalaani (Allah be pleased with them). The Saint was a master in Sacred Law, Spirituality, and all mystical facets. Some of his books can be consulted to gain a better appreciation of his immense qualities.”

Some of His Travels and Studies

In the year 873 AH he left for Hajj. Along his travel he visited Cairo and other famous cities within the region. After staying for 2-3 years in Medinah, he left to continue his studies in Cairo. He studied at the feet of the Muhaddith (Doctor in Hadith), Shaafi’i Faqih (Jurisconsult), Mufassir (Exegete of the Qur’aan) Imaam Muhammad As-Sakhaawi (831-902 AH), who was the student of the leader of the believers in the science of hadith, Al-Haafith Ibn Hajr Al-’Asqalaani. He also studied beneath Nur-ud-Deen As-Sanhoori, Abdur-Rahmaan Al-Qabbaani, Shams-ud-deen Al-Jawjari, Nur-Ad-Deen At-Tanasi, Abdur-Rahmaan ibn Hajr, and Ahmad ibn ‘Uqbah Al-Hadrami (died 895 A.H). He studied Sahih Al Bukhaari, Al-Ahkaam As-Sughraa, Bulugh Al-Maraam (which he took from the hands and tongue of Imaam As-Sakhaawi, the student of its Author Ibn Hajr), Al-Madkhal of Ibn Al-Hajj, Al-Ihyaa of Al-Ghazzaali, Ar-Risaalah of Al-Qushayri and many of the works of Ibn ‘Ataa’illah Al-Iskandari. In the book Ad-Daw Al-Laami’, Imaam As-Sakhaawi (rahimahullah) states, “He travelled to Egypt, perfored Hajj, became a Mujaawir at Medinah. He settled in Cairo for about one year. Therein he studied Arabic and Usool under Al-Jawjari and others. He read Bulugh Al-Maraam under my supervision and researched in Al-Istilaah (the science of hadith) with me. He accompanied me in certain things and I benefited from a group of his fellow countrymen.”

It was said by the author of Tabaqaat Ash-Shaadhiliyyah Al-Kubraa about Imaam Zarruq in Cairo, “When the scholars and learned men of Egypt heard of his arrival they came to him and attended his lectures. He started teaching at Al-Azhar. About six thousand men used to attend his lectures from Cairo and its suburbs in Al-Azhar. He became head of the Maalikis and their department at the University. A high well-made chair was specially placed for him on which he used to sit and dictate his lessons. This chair still exists at the Western Quarter.

He was of great power and influence with the Egyptian princes and was always welcomed by all of them.” He took tasawwuf from the scholar Ahmad ibn ‘Uqbah Al-Hadrami who was a scholar in the Shaadhili and Qadari branches. He later established himself in the city of Misurata, Libya. Misurata was the third largest city in what is called Libya today. It was a port city that connected Italy and Europe to Northern Africa. It was also a city that was on the path from West Africa to Makkah and Medinah, hence many pilgrims would stop and seek shelter, buy goods, and listen to the religious lecturers in the Masaajid.

Why Imaam Az-Zarruq chose Misurata is not absolutely known. Ibn Naasir in his “Rihlah” wrote, “Az-Zarruq was asked for his reason for moving to Misurata and he responded thus, ‘This is a matter beyond thought, not accompanied by any determination nor decided for any particular reason that we know. It is a mere accident whose being has appeared and whose existence has become real, obeying what Allah demands.”

After establishing himself in Misurata he traveled frequently to Algiers and Egypt. He gave lectures and busied himself with the remembrance of Allah . In 894 he made Hajj for his third time. On his way back he lectured in Al-Azhar and visited old companions. He stopped in a town called Al-Minyaa, giving lectures and reviving the Islamic spirit. On the 18th of Safar 899 AH, Shaykh Zarruq died while in the state of Khalwah at the age of 54. The community he lead built a large Zaawiyah for him and his students. Many of his students, who are principally Shaadhili, started a sub-order known as the Zarruqiyyah.

“Never expect anything from the creation of Allah , but rather expect things from the creator, Allah !”1 He also wrote two works on the Qur’an; Sharh Surat Al Faatihah and Tafsir Al-Qur’aan. He wrote of his travels in two major works, Al-Kunnaash and Ar-Rihlah.

…May Allah shed His Abundant Mercy and Light Upon Shaykh Ahmad Az-Zarruq. Ameen!

This is abridged for the full details on the Shaykh and other pictures please see this link.