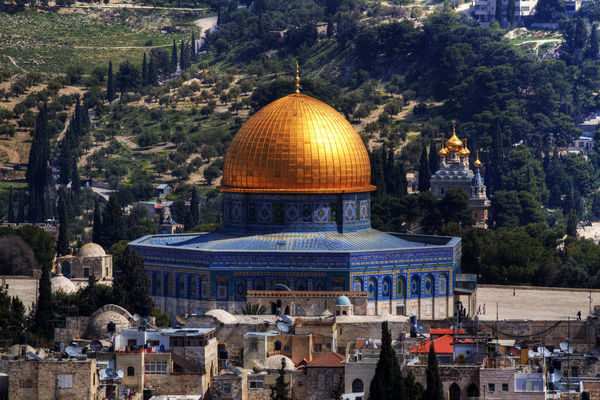 With the Israeli occupation authorities manifestly hell-bent on gaining a foot-hold at Jerusalem’s al-Masjid al-Aqsa, Muslims in Palestine are responding by converging at the Haram al-Sharif (Noble Sanctuary) in the hundreds of thousands, mainly on Fridays and during the holy month of Ramadan.

On Friday (Aug. 10, 2012), it was estimated that as many as 500,000 worshipers from across the West Bank and East Jerusalem (no Gazans were allowed) made it to the Aqsa esplanade. The previous Friday, more than 350,000 worshipers converged at the Third Holiest place in Islam.

The narrow alleyways and streets of the old town were awash with a sea of humanity, young and old, many carrying their prayer rugs and other personal items. This was despite the scorching temperature, reaching or exceeding 40 Celsius.

Unlike in previous Ramadans, the Israeli authorities relaxed restrictions on Palestinians’ entry to Jerusalem, allowing all females and males above the age of twenty to access the holy place.

But still some young men were seen being turned back at the “border crossings” which Israel created around the occupied city in order to control the entry of Palestinians.

For those living in the outlaying areas of the West Bank, the trip to al-Aqsa can be challenging. Indeed, in order to “secure a suitable place” at the Haram al-Sharif, one would have to set out to Jerusalem immediately after the dawn prayer at around 4:30 local time. Some start the trip even earlier in order to save themselves the troubles of the phenomenal crowdedness at the crossings.

Usually, a fleet of modern passenger cars wait outside mosques all over the West Bank to take worshipers to the crossings either in Qalandia north of Jerusalem or Bethlehem in the south. The trip takes between 1-2 hours, depending on how far one’s place of residence from Jerusalem.

Once at the crossing, people are made to walk nearly 500 meters through narrow passages and metal turnstiles designed to control the inflow of people. Those in need for a “security check” are made to take a different passage at the end of which they are frisked and their identity cards are thoroughly examined. Some are allowed to proceed unhindered, while others are turned back.

Once out of the crossings, we boarded buses from East Jerusalem, making the 20 minute-drive to the old town.

The influx of hundreds of thousands of Palestinian Muslims into Jerusalem sends an unmistakable message to Israelis and Jews everywhere, namely that Jerusalem is not an easy matter; a strong message that confirms that the hearts and minds of hundreds of millions of Muslims around the world are infatuated with the holy city, regardless of Israel’s unilateral actions, such as building Jewish settlements and trying to obliterate the Arab-Islamic identity of the town.

The total area of the Haram al-Sharif of Jerusalem is about 144,000 square meters and each centimeter of the holy place is coveted by the Jewish authorities, especially by Talmudic-minded Jewish groups. Such groups contemplate the building of “a Third Temple” which Jewish millenarians claim would allow Jews to attain Jewish national fulfillment and herald the coming of the Jewish Messiah or Redeemer (Jews don’t recognize Jesus Christ as the Messiah).

The Redeemer would build a worldwide Jewish empire which would be ruled from Jerusalem and Jews would dominate humanity.

Many Jewish religious authorities believe the advent of the Jewish Messiah, whose name is Yacov Ben Davis, will be preceded by internecine wars and bloodshed on a massive scale and that millions of people will be killed.

Hence, it is no coincidence that Jewish religious fanatics constantly try to foment trouble and instigate violence  at the al-Aqsa Mosque in order to draw a violent Muslim reaction, which they hope would ignite the region.

Moreover, it is widely believed that the 1994 massacre at the Ibrahimi Mosque in al-Khalil, and also recurrent Jewish conspiracies to smuggle explosives into the Aqsa esplanade took place in the same context that is to trigger violence and bloodshed.

We met with Sheikh Muhammed Hussein, the Mufti of Jerusalem and one of the main Friday preachers or Khatibs at al-Masjid al-Aqsa.

He told us that the Jewish authorities were trying to desensitize Muslim sensitivities to recurrent encroachments at the central Muslim Shrine.

“After opening a network of tunnels beneath the Haram al-Sharif, they are now trying to turn the bulk of the walled area into a public park. This is of course a ruse or a trick to take over the area,” said Sheikh Hussein, lamenting the weak reaction of the Muslim world.

He added, “If and when the Israeli government and fanatical Jewish groups sense a weak Muslim reaction, they interpret this as a green light to move a further step onward.”

Asked what the Muslims of Palestine could do to thwart rapacious Jewish designs against the Aqsa Mosque, Sheikh Hussein said, “We are the Muslim World’s first line of defense against Israeli ambitions in Jerusalem. We will not allow the Jewish occupiers of Palestine to arrogate even one centimeter of this exclusively Islamic place.

“But we need the backing of Muslims around the world.”

He added that with the help of the Almighty, Muslim vigilance will foil Israeli morbid Israeli designs. “Each and every square inch of the walled area is holy and part of the al-Masjid al-Aqsa. We are willing to sacrifice our souls and blood for al-Masjid al-Aqsa.”

This week, an Israeli lawmaker named Aryeh Eldad proposed “new arrangements” at the Haram whereby Jews would be allowed exclusive worship at the Haram on certain designated days.

Effectively, Eldad’s call amounts to partitioning the Muslim sanctuary and transforming it into a synagogue.

This, Muslim officials say, underscores the extent to which Jewish designs and ambitions have become daring and audacious, especially in the absence of any meaningful reactions from important Muslim powers, such as Turkey, Egypt, and Saudi Arabia.

We also met Sheikh Ikrma Sabri, former Chief of the Supreme Muslim Council which caters for the Haram Sharif.

Sheikh Sabri sounded visibly embittered and indignant at the “totally inadequate manner in which Muslim states react to Jewish efforts to take over the Haram al-Sharif.” He says he is nearly desperate, watching Muslim states doing virtually nothing to make Israel know that any aggression against al-Masjid al-Aqsa would lead to a real a huge conflagration that would consume everything.

“Al-Masjid al-Aqsa is our faith, our life, our dignity and honor. And if Muslims were to allow fanatical Jews to usurp it, in full or in part, then the belly of earth would be better for us than its surface.”

When the Israeli occupation authorities barred Palestinians from the West Bank and Gaza Strip from entering Jerusalem following the creation of the Palestinian Authority in 1994, the burden of catering for the Haram al-Sharif was transferred to the Islamic Movement in 1948 Palestine.

Several Muslim leaders from across the Green Line have loomed large in defending Islamic  holy places in Jerusalem, including Sheikh Raed Salah, whose name became anonymous with Muslim resistance against Jewish conspiracies against the Haram al-Sharif.

The Islamic Movement in 1948 Palestine, which is organizing free semi-daily trips to the Aqsa Mosque, is closely monitoring Israeli misdeeds and designs at the Haram.

This week, Sheikh Kamal al-Khatib, Salah’s deputy, warned the Israeli authorities that any “misadventure at al-Masjid al-Aqsa would lead to earth-shaking consequences for Israel and the region.”

“The stars of heaven are closer to them than partitioning the Haram,” Khatib was quoted as saying.

Needless to say, the battle for al-Masjid al-Aqsa is far from over, some say it has just begun.

But the vital question that begs its self remains whether the world’s 1500 million Muslims have adequately prepared themselves for that battle?