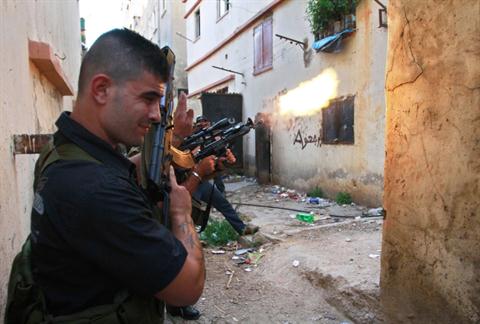 TRIPOLI, Lebanon: Armed supporters and opponents of Syrian President Bashar Assad fought in Lebanon’s second largest city, leaving at least five dead and more than 70 wounded, in another alarming sign that the country is being sucked into the Syrian crisis.

At least 10 Lebanese soldiers were among those wounded in the fighting that broke out Monday night in the port city of Tripoli. Security sources said four had been killed in the violence Tuesday, including a 13-year-old boy and four men identified as Zakariya al-Omar, Ahmad Mahmoud, Ahmad al-Hajjar and Imad Ismail.

Also, 20-year-old Sarah Hussein was killed when she fell down an elevator shaft while trying to flee the fighting Monday.

The First Intervention Force Regiment, an Army unit comprised of jeeps, trucks and armored personnel carriers, was forced to retreat Tuesday afternoon after coming under a barrage of machine-gun fire and RPG attacks when it tried to subdue the violence, security sources told The Daily Star.

Clashes then intensified between the anti-Assad Sunni stronghold of Bab al-Tabbaneh and the Alawite-dominated pro-Assad Jabal Mohsen neighborhoods after the Army unit’s pullout. The Army maintained a limited presence in the area, according to security sources.

A meeting held at Future Movement MP Mohammad Kabarra’s Tripoli home brought together Future lawmakers and representatives of Islamist movements in the city in a bid to put an end to the violence.

The meeting accused the Syrian regime of orchestrating the violence in Tripoli and warned the residents of Jabal Mohsen against “sacrificing the lives of your own children for the sake of the Assad family.”

“The people of Bab al-Tabbaneh are aware of the Syrian regime’s evil plan and do not want to be part of a game designed to serve the regime’s interests,” said a statement.

The statement also called on the Lebanese Army to pursue and arrest the people responsible for sparking the violence, but added that soldiers should be more careful while carrying out their duties to avoid apparently random shootings that had resulted in the deaths of civilians. “Whoever is behind such incidents should be held accountable,” it said.

The statement announced a cease-fire on the part of Bab al-Tabbaneh. Attacks from Jabal Mohsen continued while the meeting was under way, but calm was restored almost an hour later.

The violence came less than a week after Lebanon was jolted by a wave ofkidnappings of Syrians and two Turkish nationals by the Meqdad clan and other groups in a bid to exchange them for 12 Lebanese held hostage by Syrian rebels. One Meqdad family member was recently kidnapped by Syrian rebels in Damascus and 11 Lebanese pilgrims were abducted in May.

Prime Minister Najib Mikati commented on the ongoing fighting in his hometown Tuesday, accusing “several parties” of seeking to draw Lebanon into neighboring conflicts. “We have long warned against slipping into the smoldering fire surrounding Lebanon but it is clear that there are several parties who seek to involve Lebanon in the conflict,” Mikati said in a statement.

“We call upon residents of Tripoli not to allow anyone to drag them into battles that only produce murder, devastation and destruction or to be used as ammunition for the battles of others,” he added. Mikati also said he had asked the Army and security forces to use all their capabilities to stop the clashes.

Lebanon’s stability has been under the spotlight since Syria’s uprising – now in its 18th month – intensified at the start of this year, steadily raising tensions between the two deeply divided political camps of the pro-Assad March 8 and pro-opposition March 14 coalition.

Security sources said that after a brief lull overnight, the fighting began again with sporadic gunfire at around 3:30 a.m. Tuesday, intensifying a few hours later with exchanges of machine-gun fire and RPGs between the rival neighborhoods, breaking an earlier cease-fire.

They told The Daily Star that the First Intervention Force Regiment deployed in Bab al-Tabanneh around midday Tuesday and responded to sources of fire.

But the battalion came under heavy machine-gun and RPG fire, prompting it to pull out less than half an hour after deployment, the sources added.

A Lebanese Army communiqué said that five soldiers had been wounded Monday evening when their positions and patrols came under fire.

Another five, including an officer, were wounded Tuesday morning when a military outpost was targeted with a hand grenade, the Army said.

It added that Lebanese troops were in pursuit of the gunmen and had confiscated several machine guns, ammunition and hand grenades during house raids.

“We are living through a real battle,” Youssef al-Sheikh, a barber in Jabal Mohsen told The Daily Star by telephone.

“We are surrounded. No resident can leave Jabal Mohsen under the heavy clashes,” he said, pointing out that locals normally flee to Syria or the northern province of Akkar.

As with Sheikh’s barbershop, other businesses in the heart of Jabal Mohsen remained open Tuesday, as battles were concentrated on the demarcation lines between the two neighborhoods.

Walid al-Ali, a 50-year-old who lives with his wife and disabled mother in Bab al-Tabbaneh said the streets and alleyways were full of gunmen. “Two people were killed in front of me just now,” said Ali, his voice shaking as he spoke to The Daily Star by telephone.

“Many people have been fleeing to safer areas since early morning [Tuesday],” Ali said, adding that while Bab al-Tabbaneh was not surrounded, he could not leave due his mother’s health.