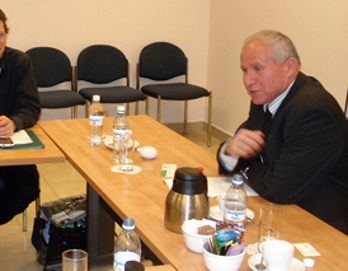 JERUSALEM — Israel has made a crucial Cabinet addition as tension grows with Iran over its nuclear program.

Netanyahu announced that former security chief Avi Dichter would be responsible for the home front.

It is a crucial appointment because Israel could be bombarded by thousands of missiles and rockets in the event of war. Iran has promised fierce retaliation for any Israeli attack, and it could be backed by its well-armed Islamist allies, Hezbollah in Lebanon and Hamas in Gaza.

Israel has warned that Iran is moving quickly toward nuclear weapons capability, something it sees as a threat to its existence.

Iran says its nuclear program is for peaceful purposes, and it has played down Israeli threats of an attack as “hollow and baseless.” In Tehran, a Foreign Ministry spokesman said Tuesday that Israel realizes an attack would be “stupid” and would “provoke very severe consequences.”

Israel, however, is not taking any chances. Netanyahu said his government has invested more than any other in strengthening the home front. A series of Israeli TV reports, though, have shown that many bomb shelters are inaccessible and in a state of disrepair.

Tel Aviv resident Eliezer Shimoni said the bomb shelter in his neighborhood is locked and no one knows who has the key.

The reports suggest that Israel is woefully unprepared for war, but the saber rattling continues.

In newspaper interviews, senior Israeli officials have expressed doubt that the United States would be willing to take military action to stop Iran, especially in an election year. Their message is clear: Time is running out to stop Iran’s alleged quest for the atom bomb, and if the U.S. fails to act, Israel will.