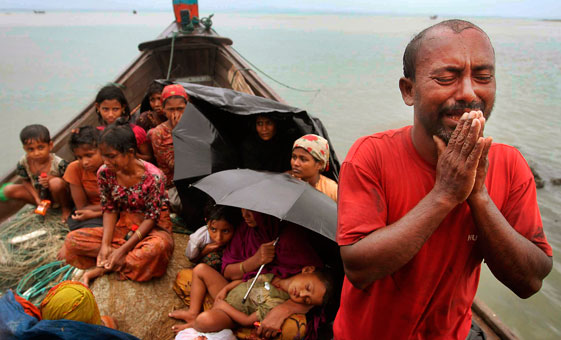 Don’t just READ this and feel sorry for your Burmese Muslim brothers and sisters.TAKE ACTION NOW & DONATE MONEY TO HELP (LINKS to donate at the end of the article). If you can’t donate, you can at least encourage others to do so and multiply your rewards during these blessed last days of Ramadan. Please SHARE this article to help raise as much money as possible.

Since June 2012, reportedly 20,000 Burmese Muslims are brutally persecuted, displaced and killed in the name of religion, race and ethnic cleansing. The actual reason for this ongoing sectarian violence in Burma (Myanmar) is unknown. It is reported that these riots started on 3rd June 2012 when 11 Rohingya Muslims were taken out of the bus and killed by the Burmese Army and the Buddhist Rakhines in the Northern Rakhine state of Burma (formerly known as Arakan). According to Amnesty International , since 1978, the  800,000 Rohingya Muslims have suffered from severe human rights violation as they are considered as illegal immigrants, non citizens and foreigners.

The history unfolded to Burmese about the forced conversions of Buddhists under the Mughal rule which developed anti- Muslims sentiments. In 1930’s, there were “Anti-Muslim’s” and “Burma for Burmese Only” campaigns under the British rule. The Buddhists denied Muslims claim that there ancestors were settled in Burma since 9th Century and practically barred Rohingya Muslims from being recognized as Myanmarese nationals under the constitution. After 1948 Independence, The Burma Muslim Congress was cut out from the AFPFL (Anti-Fascist Peoples’ Freedom Party) and was later dissolved. There was expulsion of Muslim soldiers from army and strict reservations were imposed on cow slaughter and pilgrimage.

The 1982 Citizenship Act does not recognize the Rohingya as one of Burma’s national races and exclude it from the citizenship right. Under such drastic circumstances, the rich Muslims gradually took refugee to neighbouring states like Bangladesh and India. The poorer Muslims were left in a deplorable condition at the mercy of Buddhists who deprived them from all socio-economic and political rights. There were also anti Muslims riots in Mandalay (1997) and Taungoo (2001) in the name of racial violence. The situation aggravated after 9/11, as violence was now committed in the name of Islamic extremism against the Burmese Muslims.

With such appalling history, the present violence seems a thread to the knot, as the Burmese are determined to repeat the holocaust for ethnic cleansing of Muslims from their Burmese soil. Myanmar’s President Thein Sein clearly mentioned that there are two tangible solutions: either to expel all Rohingya Muslims to a third country or sending them to refugee camps under the oversight of the United Nations High Commissioner for Refugees (UNHCR), which has been denied. Even the Bangladesh has refused to accept any Burmese Muslims refugees and has banned aid to them. No permanent solution has yet been formulated to resolve their identity crisis, issue of citizenship and settlement rights of Burmese Muslims.

At this juncture, the helpless and disappointed Burmese Muslims, one of the largest stateless community in Asia, look toward world community for a practical solution but unfortunately the world has turned a blind eye to the massacre of Burmese Muslims. No serious action has been taken by UN and OIC in real terms. USA, Human Right Organizations and Peace activists seem less interested to bother about the Burmese Muslims genocide. The media reports, photographs and videos are termed as faked/ invalid and less western media coverage is given to the issue.

Why so? Just because these are not Americans, Israelis or Westerners instead ill-fated Muslims who are being butchered at the hands of monks? Is it just an internal affair of the Burma? Is USA and UN too busy placating new Burmese democratic government? Where is the peaceful compassion of Nobel Peace Laureate Aung San Suu kyi gone while speaking about the Rohingya Muslims? Is social reform and protection of human and ethnic rights not part of Burmese reform agenda?

These are the queries which need an immediate response by the western world. The cold and inhuman response by the western community has agitated the Muslims all over the world, who have strongly condemned the genocide of their Burmese Muslims brothers and sisters. The world wide rallies/protests and public demonstrations are staged demanding Organization of Islamic Conference (OIC) and UN to intervene for the cause of Burmese Muslims.

The Secretary General of OIC has asked for the unity and co operation of Muslim Ummah and has proposed an urgent request to the Human Rights Council to send a fact-finding mission to Burma to investigate the massive violence perpetuated against the Rohingya Muslims. Countries like Iran, Saudi Arabia, France, Turkey and Pakistan have expressed deep concern over the loss of life and property of Rohingya Muslims, condemned the ethnic clashes in Burma and have called for hastening the process of rehabilitation and settlement of Rohingya Muslims.

As Muslims around the world prepare for the holy month of Ramadan, the Rohingya Muslims of Myanmar are being painfully subjected to barbaric and appalling atrocities of extremist Buddhists. Their lives are in a constant state of trepidation and suffering.

Branded by the United Nations as one of the most persecuted minorities of the world, Rohingyas are a Muslim people living in the Rakhine State, located in the west of Myanmar. With a population of 3 million, Rakhine state is bordered by the Bay of Bengal to the west and the majority of its residents are Theravada Buddhists and Hindus.

The suppression of the Rohingya Muslims of the Arakan region dates back to World War II. On March 28, 1942, about 5,000 Rohingya Muslims were brutally massacred by the Rakhine nationalists in the Minbya and Mrohaung Townships. After this incident, the Muslims of the region were frequently subject to harassment by the Burmese government which has so far refused to grant them official citizenship. According to the UN High Commissioner for Refugees, this lack of full citizenship rights means that the Rohingyas should tolerate other abuses, including restrictions on their freedom of movement, discriminatory limitations on access to education, and arbitrary confiscation of property.

It’s said that as a result of dire living conditions and discriminatory treatment by the government, some 300,000 Rohingyas have so far immigrated to Bangladesh and 24,000 of them have also escaped to Malaysia in search of a better life. Many of them have also fled to Thailand, but neither Bangladesh nor Thailand has received them warmly. Bangladesh is negotiating with the Burmese government to return the Rohingyas and Thailand has sporadically rejected them. There have been instances where boats of Rohingyas reaching Thailand have been towed out to sea and allowed to sink, sparking international anger among Muslims and non-Muslims.

Human Rights Watch says that the government authorities continue to require Rohingya Muslims to perform forced labor. According to HRW, those who refuse or complain are physically threatened, sometimes with death, and children as young as seven years old have been seen on forced labour teams.

Writing for The Egyptian Gazette, University of Waterloo professor Dr. Mohamed Elmasry has enumerated the different hardships the Rohingya Muslims have historically undergone. He writes that they are subjected to various forms of extortion and arbitrary taxation, land confiscation, forced eviction and house destruction and financial restrictions on marriage. Rohingyas continue to be used as forced labourers on roads and at military camps.

The Myanmar government’s mistreatment of the Rohingyas, however, has long been contested and protested by international organizations. For several years, human rights activists have decried the arbitrary measures levelled against the Rohingya Muslims in Myanmar by the government and extremist Buddhists. In May 2009, Elaine Pearson, the Human Rights Watch’s deputy Asia director issued a statement in protest at the deteriorating conditions of the Rohingya Muslims, calling on the Association of Southeast Asian Nations (ASEAN) to press the Burmese government to end its brutal practices: “the treatment of the Rohingya in Burma is deplorable – the Burmese government doesn’t just deny Rohingya their basic rights, it denies they are even Burmese citizens.”

Now, conflict has escalated in the Rakhine State again and Muslims are once more experiencing difficult days. It was reported that 10 Rohingya Muslims were killed by a mob of 300 Rakhines while on their way back from the country’s former capital Rangoon. According to a group of UK-based NGOs, 650 Rohingyas were massacred from June 10 to 28. The United Nations estimates that between 50,000 and 90,000 Rohingyas were displaced since the eruption of violence in the Asian nation. However, due to the absence of independent reporters and monitors in the country, it’s impossible to verify the exact number of those who have been displaced.

It’s also reported that some 9,000 homes belonging to Muslims in the western state of Rakhine were destroyed. On July 20, Amnesty International called the recent attacks against minority Rohingyas and other Muslims in Myanmar a “step back” in the country’s recent progress on human rights, citing increased violence and unlawful arrests following a state of emergency declared six weeks ago.

The Organization of Islamic Cooperation (OIC) has voiced its concern over the recent violence in the state of Rakhine and the varying reports which have leaked out as to the number of the Muslims killed. As reported by the TimeTurk News Agency, over 1,000 Rohingya Muslims have been murdered thus far in conflicts in the region.

The mainstream media in the West have been largely silent about the massacre of Muslims in Myanmar and the ordeal that has befallen them.

Along with the mainstream media, the Western governments have also blatantly turned a blind eye to the heartrending anguish and suffering of the Rohingya Muslims. Even the renowned Burmese political activist and Nobel Peace Prize laureate Aung San Suu Kyi who has been released from house arrest and was just invited to Norway to deliver her Nobel acceptance speech 21 years after being awarded the prize, preferred not to speak about the affliction of her fellow citizens.

People around the world, however, should realize that coming to the help of a subjugated minority that is undergoing excruciating hardship is a moral responsibility and although the so-called international community is silent about the inhumane massacre of Muslims in Myanmar, each of us can lend a hand in putting an end to their suffering.