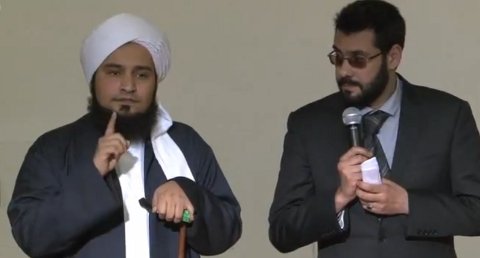 www.radicalmiddleway.co.uk – Habib Ali passionately talks about the compulsion placed on Muslims, especially the religious men, in ensuring that the treatment of women within the community is done in a just manner. He outlines the Prophetic tradition on how the measure of goodness is tied to the goodness to women.

After the moderator explains the situation of a Muslim woman w/ child kicked out by her husband, and asking for financial support from the audience.

“For the woman under the Sharia, it is a communal obligation to look after her if none of us do it, then we’re all sinning. And it isn’t a favor to her, it is an obligation for us. Not because we pity her, not because we owe her something– IT IS HER RIGHT.

That is not the only issue. We have to work seriously to end problems like this. We have to treat this problem. We can’t stop talking about the future of Muslim society here, and our rights, and the problems between the conservatives and this one, and so on. We’re talking about building a Muslim society…. what we’re talking about will all come to, and forgive me for saying so, worse than meaningless. A waste. All of that talk, building the community, rousing the Muslims, having a future for Islam. It is all rubbish, all a waste of time, if we’re not serious if we don’t raise awareness and do something to stop the injustices being done against the mother’s in our societies.

To the men, especially to those who are religious, for those who are wearing a turban or beard, those who talk about helping islam. Look at your right and left– before looking, look at yourself. How do you look at women? Your standing in prayer vigils at night? you’re fasting through the day? you’re memorizing and reciting the Qur’an, you? The money you spend in charity? Your pilgrimage to the holy sites? The knowledge you have and teaching it? Your struggling in the sake of God? Everything you do? Won’t get you to the point of being summoned before God, if you don’t let all of that pass through the gateway of your benevolence towards women. This is not the words of contemporary human rights activists. It’s not for me to beat the drum. The prophet said, The best of you, is the best of you to his family.

So the prophet made the measure of goodness in this life – tied to goodness towards women. Has my message reached you? There are still people who teach stuff… they are teaching stuff that is falsehood, from their own cultures where a woman is treated as commodity. We need to stop running away from the reality of our problem. There’s Muslim women being raped, and it’s like its changing from isolated cases to becoming a phenomena. Is that true or not?

The communities try to run away from this problem, they bury their heads in the sand. And when the woman speaks up and demands her right, she is silenced! When the shaykh in the mosque finds himself in a position where he can’t actually do anything to stop whats happening to her, and she goes to the courts to get her rights, the community looks at her like she has betrayed them. True or not?

And the victim becomes a criminal. And the person who gives that a stamp of approval is a leader in the faith?

Why would you find it strange after all of this, that a generation after this will leave the faith all together? Why do you find it strange when a Muslim woman goes to get her rights from a rights organization outside of the community? Because you haven’t given her protection! You haven’t given her dignity! You haven’t given her respect! And you want her to carry on accepting this? And the biggest crime is that you justify this by saying it is the command of God?! If the Muslim community doesn’t start taking serious steps from the mosque… in executing God’s commands and the counsel of the Prophet with regard to giving women their rights, if that is neglected, if that is overlooked, if people don’t want to treat this malady, people will stand before God on the Day of Judgment, and God will judge them not just for them, but for the generations who lost their faith because of them.

Enough of this talk that it was Islam who gave women rights and freed women. Yes, Islam did that. The question is not whether islam did that or not. The Question that should be asked is why we’re not implementing islam in that regard? Why do we just leave it as sermons? Or a means of self defense in the media?

Oh shaykh, put yourself in the shoes of the girl who is abused. When she comes running to you, you are speaking about the defense of islam and the rights of women. When she goes to the rights organization, she finds them defending her. Who do you think she’ll turn to? Sorry for prolonging what I said.. when I heard this, I could not stay silent.