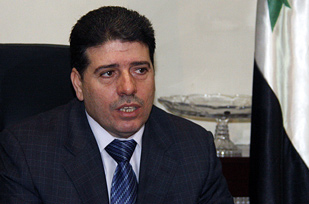 Halki, who was elevated from the post of health minister on Thursday, is a Sunni Muslim from the southern province of Deraa where the 17-month-old uprising against Assad erupted. He replaces caretaker premier Omar Ghalawanji who was appointed hours after Hijab’s defection.

Married with four children Halki, 48, graduated from Damascus University’s faculty of medicine in 1987.

On Monday, Assad suffered the embarrassment of seeing his prime minister defect after only two months in office. Hijab fled to Jordan with his family.

Hijab’s escape deals another blow to Assad’s authority, already shaken by the assassination last month of four of his top security officials and by rebel gains in Damascus, Aleppo and swathes of rural Syria.

The latest development came as battle raged between regime forces and armed rebels in the northern city of Aleppo.

Rebels fighting in the district of Salaheddine, a southern gateway to the city, said they had been forced to fall back from some frontline positions on Thursday by withering bombardment which had reduced buildings to rubble.