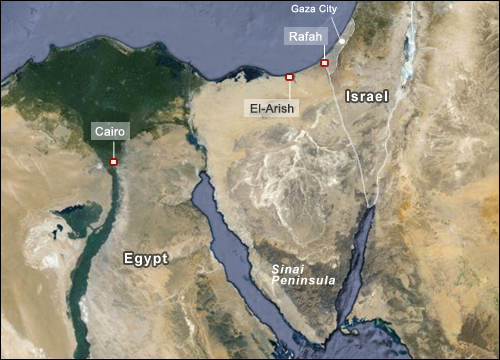 Egyptian President Mohammed Morsi has fired his intelligence chief and the governor of North Sinai in a major reorganization that extends to the commander of the military police.

The announcement of Morsi’s decision Wednesday comes on the heels of a military operation in the Sinai Peninsula, targeting suspected Islamist militants.

In a statement read on state television Wednesday, the military said it started the Sinai operation to restore stability and regain control there. Since the ouster of former president Hosni Mubarak last year, parts of the Sinai have seen an increase in lawlessness.

Egyptian officials say they killed 20 suspected militants in airstrikes Wednesday, hours after militants attacked security checkpoints about 50 kilometers from the border with Israel and the Gaza Strip.

On Sunday, militants launched their bloodiest ever attack on the army, killing 16 Egyptian border guards as they tried to cross into Israel.