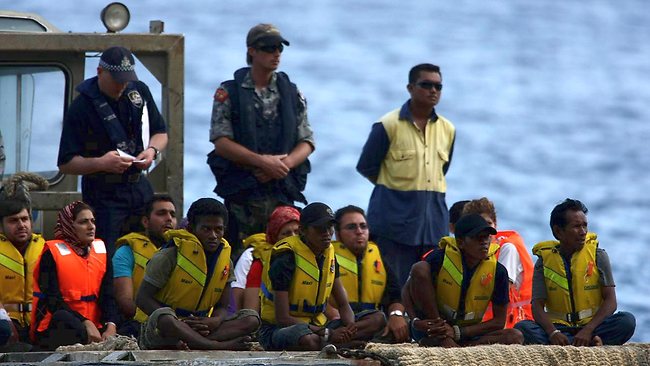 MuslimVillage.com Editor – the term “illegal boat people” used in the article below is factually not correct. The correct term is “asylum seekers” as according to Australian & international law, it is not illegal to seek asylum in another country, no matter how you arrive.

A controversial article on illegal boat people by the publisher of the Australia’s main Jewish newspaper has ignited a storm of protest, with some critics savaging it for “vilifying Muslims” and promoting “xenophobic, Islamophobic and heartless sentiments.”

“The Jews who fled the Holocaust fled certain death,” he wrote. “I doubt whether there is a single boat person in that position. Some may have fled a war zone or limited economic opportunities while others are seeking an easy life.”

Magid, a multi-millionaire property developer who bought the newspaper in 2007, also accused illegal immigrants with “destination shopping” and suggested – despite the “collective memory of Jews’ attempts to escape the Holocaust” – that Jews curb their compassion towards boat people.

He also linked asylum seekers to terrorism, suggesting that Muslim boat people could increase the risk of potential terror attacks.

“If Al-Qaeda or another jihad organization wished to create a network of terrorists in Australia, undocumented illegal immigration would ensure the Australian authorities had no way of verifying their bona fides,” he wrote.

The backlash to Magid’s article exploded in the blogosphere with the vast majority of comments agreeing with David Zyngier, who scolded Magid’s “anti-Jewish sentiments.” Zyngier, the son of an Auschwitz survivor who arrived here seeking asylum without papers in 1949, founded Jews for Refugees in 2002.

The article also triggered an open letter, initiated by the left-wing Australian Jewish Democratic Society on Monday, which accused Magid of engaging in “group vilification and dog whistle politics” against Muslims, and called for an apology “to all the victims of persecution who arrived by boat.”

An online petition accrued more than 375 signatories (as of Tuesday) along with a deluge of withering comments such as “anti-refugee sentiments have no place in my Jewish identity” and Magid used “fear, misinformation and biased language to vilify.”

The uproar was picked up by the mainstream media, with Crikey, an independent online news agency, publishing a report Tuesday under the headline “Jewish paper speaks ‘hate’ against Muslims, boat people” while Australia’s multicultural broadcaster, SBS, also aired a report on the fallout.

The refugee debate in Australia is a political hot potato and border protection is a polarizing issue, reignited in late June when about 100 boat people drowned after their boats sank off the Australian coast. Australia received 11,800 claims for asylum in 2011, according to the UN refugee agency, compared with 441,000 claims across the globe. More than 50 boats carrying more than 4,000 asylum seekers have been intercepted by Australian authorities this year, Reuters reported.

Jewish officials avoided entering the fray, with Danny Lamm, president of the Executive Council of Australian Jewry, simply saying: “The ECAJ stands by all aspects of its longstanding policy on refugees and asylum seekers.”

The council’s resolution supports the processing of asylum seekers “in a spirit of compassion” and urges all Australians to engage in dialogue “in a considered and respectful manner and without resorting to pejorative generalizations.”

One insider, who declined to be named, told Haaretz that Jewish leaders were reluctant to weigh in because of Magid’s position as publisher and because of the sensitivity of the subject matter.

But Arnold Zable, an award-winning author and refugee advocate who says he is alive today because his mother was a queue jumper, described Magid’s article as “one of the most ill-informed, factually inaccurate pieces on asylum seekers” he has ever read.

“Refugees and asylum seekers are only doing what we would do in their shoes, what Jews … have done for centuries,” he told Haaretz. “They are some of the most vulnerable, oppressed and traumatized peoples of our times.”
Mark Baker, director of the Australian Center for Jewish Civilization at Monash University in Melbourne, agreed. “Tens of millions of people have faced death by genocide and war in the years since the Holocaust, yet for Robert Magid people who risk their lives to escape crisis zones are deemed to be unworthy of our compassion,” he said.

“Our values and historical experience call on us to stand on the side of refugees. How often have we [Jews] escaped perils by pursuing illegal immigration routes in order to survive and start a new life?”

The Union for Progressive Judaism’s Religious Action & Advocacy Center lashed Magid’s generalizations. “We believe that efforts to lump together asylum seekers, refugees and terrorists and suggestions that label them all as deceitful and criminal are both sad and inaccurate,” it said in a statement.

But one blogger defended Magid’s argument, saying there must be a proper vetting process for refugees. “I’m not saying that every foreign national is a hate-filled religious fanatic, but they do exist (just look at the European Union). The vetting process exists precisely for that purpose, so that actual refugees get in.”

In a rebuttal to Magid, Melbourne’s Ralph Genende wrote on Galus Australis, an online Jewish magazine: “Unlike Robert Magid, I do not believe there are limits to compassion. I take pride in being part of a people who put people and compassion first.

“Australia, like Israel, is a society built on migration, and if you absorb your migrants with compassion and skill you build a stronger society both economically and ethically.”

Asked to respond to the torrent of criticism, Magid told Haaretz he stood by his article. “It’s not a question of who’s more compassionate,” he said. “The Jews who had the gas chambers behind them would have gone to any country. I feel a hell of a lot more sympathy for people starving in Darfur.

“These are the people who should have first priority not people who have the money and cunning to jump the queue.”

He said he believed “most Australians including most Jews would agree with me but don’t have the guts to come out and say it.”

Israel has the same problem, added Magid, who lived there for a period. “It’s resulting in a lot of racism in Israel. I think most Israelis would agree with me.”

The newspaper’s editor, Zeddy Lawrence, defended publishing Magid’s article, saying it was “just one viewpoint among many we publish, most of which actually tend to be a little more ‘compassionate’ than his.”

Lawrence said Magid’s article was in response to a piece published in the newspaper a fortnight ago by his brother, Rabbi Jeremy Lawrence of Sydney’s Great Synagogue, who wrote: “How can we be silent as lives are lost on immigration boats bound for Australia?

“It is surely incumbent upon us to acknowledge a humanitarian responsibility to offer safe passage and a haven to those who cannot wait,” Rabbi Lawrence wrote.

George Fink, a refugee from Vienna, said he was “desperately sad” that Magid had made such “an uncharacteristic and flawed attack” on refugees, since Magid himself was a refugee who was born in China and his (now deceased) parents – Ira, a Peace Now activist, and Isador, a member of the board of governors of the Jewish Agency – fled with the family from Shanghai to Melbourne.

Australia has absorbed some 740,000 refugees and humanitarian asylum seekers, including about 35,000 Jewish refugees from Nazi Europe, according to the Refugee Council of Australia.