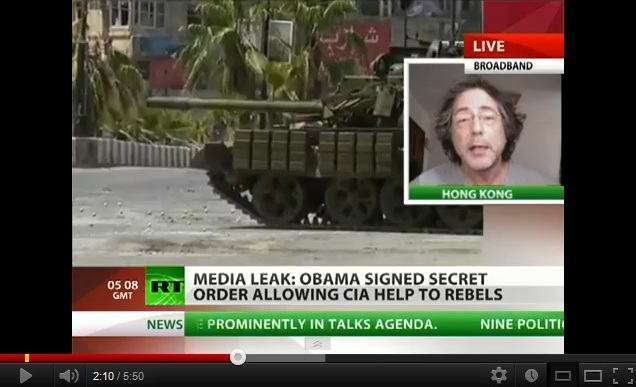 Asia Times Online correspondent Pepe Escobar told RT that the leak’s timing was intended to distort the true nature of Washington’s covert operations on the ground in Syria.

“This intelligence finding signed by Obama – that’s the code for a secret order – this was signed six months ago. So the fact that Reuters has only been allowed now to report about it proves that there have been high deliberations in Washington: ‘should we let people know about what they already know?’”

“In fact, the Washington Post two weeks ago had already reported about it, and when the CIA wants to leak something in the US, they usually go to the Washington Post. The CIA and Mossad, on the ground [in Syria], side by side working with the Qataris, the Turks, the Saudis and a swarm of jihadis coming from everywhere, but especially from across the border in Iraq,” he argues.

Escobar says the leak was intended to make it look as though Washington was leading the Syrian campaign from behind the scenes, when in fact the US is “leading from the front lines alongside al-Qaeda-style Jihadists, Qatari intelligence, and Turkish logistics.”

He says the Western drive against Syria follows the breakdown in the international order caused by the 2011 Libyan intervention.

“There’s no semblance of international law since what was decided in Libya last year. The maneuvering and the wording of UN resolution 1973, authorizing war – a no-fly zone was actually war – against Libya. That was the end of international law as we know it. Nation-states don’t matter anymore. If you are a neo-colonial power, like Britain or France, or an empire like the US, you can trample on nations’ sovereignty anywhere, anyhow, anyplace, and this is exactly what’s happening. That’s why Russia has been opposed to it from the start, because Moscow sees that as the end of the sovereignty of nation-states,” he says.

He added that Syria’s disintegration into a weak – or failed – state is part of Israel’s long-term designs on Iran.

“The battle of Aleppo could become an extended [rerun of] Lebanon in the 1970s. This is the ‘Lebanonization ‘of whole tracts of Northern Syria, in fact. And this, by the way, is the Israeli strategy. Israel wants a ‘Lebanonized’ and ‘Somalized’ [Syria], like the new Somalia in Libya; a very weak country with sectarian strife… an overextended army, and of course, innocuous against Israel. So this means opening the way for an Israeli attack against Iran in the next few months or perhaps in 2013.”