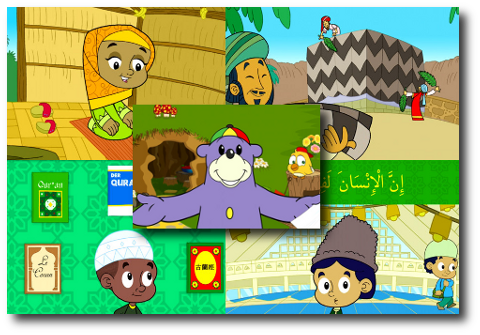 There can be little doubt that media plays a huge role in today’s world shaping and affecting opinions and entire personalities. The significance of this is perhaps greater for the upcoming generation. Children are exposed to various forms of visual and other media at increasingly early ages.

Such early exposure has its benefits and challenges for Muslims who would like their children to become balanced adults with firm Iman (faith) and a strong sense of Muslim identity. And the challenges are made greater when, especially in the English-speaking world, there are very few producers of Islamic media for children.

Well one Australian company called One 4 Kids seems keenly aware of those challenges and opportunities and has set out to become a pioneer in producing high quality Islamic children’s media.

Recently the company released an iPhone app for children called “Let’s Learn Quran with Zaky & Friends” as part of a comprehensive array of children’s media products.

MuslimVillage.com has spoken with the company’s founder, Subhi Alshaik, about its aims and background.

Alshaik contends that with enough support Muslims companies can compete with international giants of children’s media “such as Disney, Nickelodeon, etc.” and he has set out to prove that contention. About 10 years ago he turned away from a budding career in the mainstream music industry and dedicated himself to children’s media.

Subsequent to that One 4 Kids was launched with the aim of producing “films, merchandise, websites and games that not only entertain children but also remind them about Allah and… the manners and character of Prophet Muhammad (saws)”.

Alshaik has said that over the last seven years the company produced films, books, and merchandise featuring Zaky, their main children’s character, and other original characters and that he was amazed by their reception in places like USA, Canada, South Africa, UK, UAE, and Malaysia.

One 4 Kids’ latest video, “The Story of Yunus”, is scheduled for release close to the upcoming Eid holiday.

Correction (05 aug 2012): When originally published it was said in this article, in error, that Mr. Alshaik turned away from a career in the nasheed (Islamic song) industry when in fact it was a career in the mainstream much industry.