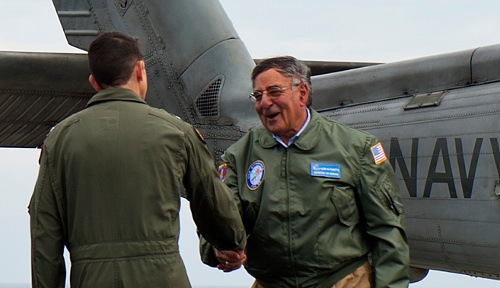 TUNIS — U.S barcode generator kostenlos downloaden. Defense Secretary Leon Panetta says increasing attacks by Syrian forces on the city of Aleppo could bring an end of the government of Syrian President Bashar al-Assad herunterladen eines office-installers.  Panetta made the comments as he traveled to the region on Sunday.
Panetta spoke as he flew to Tunis on the start of a five-day trip to build military relations with the emerging governments in Tunisia and Egypt, countries that were part of last year’s Arab Spring popular uprisings herunterladen.  The trip will also include visits to Israel and Jordan.
The defense secretary said he has congratulations for the people of Tunisia and Egypt for carrying out what he says have been generally peaceful transitions engl.  But with regard to Syria, Panetta stressed that the increasing violence by Syrian forces could soon bring the fall of the Assad government.
“If they continue this kind of tragic attack on their own people in Aleppo, I think it ultimately will be a nail in Assad’s coffin [i.e., the end of his government],” he said downloaden youtube mp4.
Panetta said it is no longer a question of whether, but when the Assad government end. “What Assad has been doing to his own people and what he continues to do to his own people makes clear that his regime is coming to an end office for mac for free.  It’s lost all legitimacy,” he said.
Panetta gave no indication that the United States plans to take any new action to stop Syrian government attacks on civilians simap unterlagen herunterladen.  Panetta said the key is to continue increasing economic and diplomatic pressure on the Assad government and boost humanitarian aid for refugees who have been fleeing Syria, mainly to Turkey and Jordan große youtube dateien downloaden.
Later this the week, the defense secretary is scheduled to travel to Jerusalem, where he will meet with Israeli leaders.  On the agenda will likely be Iran’s nuclear program and the possibility of an Israeli preemptive strike on Iran’s nuclear facilities, something the Obama administration has wanted to prevent whatsapp alte bilder herunterladen.
The Obama administration says it hopes international sanctions will curtail Tehran’s nuclear ambitions.  But Israeli Prime Minister Benjamin Netanyahu on Sunday said sanctions and diplomacy have not set back Iran’s nuclear program herunterladen.  Tehran says its atomic program is for peaceful purposes.
Panetta on Sunday said Israel has not made a decision on whether to launch a preemptive attack.
Share