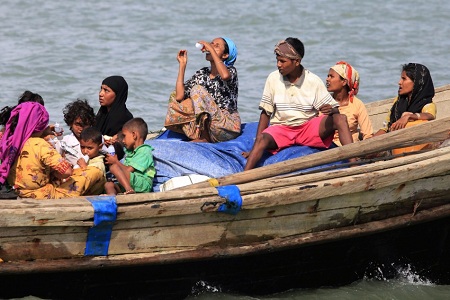 Last week we ran a story on the desperate plight of the Rohingya Muslims in Myanmar (Burma) that touched a lot of people who wanted to donate to help ease the situation. Through the help of one of our readers, we have found a charity – the US based Helping Hand for Relief & Development (HHRD) that is already active on the ground and can take online donations. We encourage everyone to donate  – even a $1 – as it will all help InshAllah.

Here is the link to Donate Online:

Following is what they are providing as a first step relief assistance:

The recent ethnic clashes between the Rohingya Muslims and the Buddhist community in the Rakhine (or Arakan) province of Myanmar have attracted global attention though late – the latest is the UN’s decision to probe into the killings and human rights violation there. An ugly incident of rape and murder of a Buddhist woman allegedly by three Rohingya Muslims in the end of May this year turned into a disaster for Rohingya Muslim community in Myanmar.

There are more than 800,000 Rohingyas residing in Burma, mostly in the province of Rakhine. According to several UN reports, Rohingyas are one of the most persecuted minorities in the world. The military Junta striped Rohingyas off all the rights of a citizen through a law called Citizenship Law in 1982, thus making Rohingyas the only stateless community of the world.

The history of Rohingya community in Burma goes back to 8th century as they claim to be original settlers of Rakhine (Arakan) province the country while tracing their ancestry to Arab traders. Bengali Muslims from neighboring Bengal (which then included Bangladesh also) started arriving in Rakhine after King Narameikhla (1430–1434) retained his throne with the help of Sultan of Bengal of that time. Besides, a large number of Bengalis migrated to Rakhine during the British rule which encouraged Bengali inhabitants to migrate to fertile valleys of Arakan as agriculturalists.

Rohingyas practice Sunni Islam. Because the government restricts educational opportunities for them, many pursue only basic Islamic studies.

A brief history of persecution of Rohingyas

This is not the first time that Rohingya Muslims were persecuted in Myanmar. In their history, such mass killings and exodus have happened several times.

The annexation of the independent province of Rakhine in 1784 by the Burmese government came up with discriminatory policies and persecution of Rohingyas. They were marginalized and the Myanmar government put several restrictions on their movement, their marriage, and constantly confiscated their land and drove them to annihilation. It is said as many as 35,000 Arakanese people fled to the neighbouring Chittagong region of British Bengal in 1799 to avoid Burmese persecution and seek protection from British India. The Burmese rulers executed thousands of Arakanese men and deported a considerable portion of the Arakanese population to central Burma, leaving Arakan as a scarcely populated area by the time the British occupied it

During World War II, Japanese forces invaded Burma, then under British colonial rule. The British forces retreated and in the power vacuum left behind, considerable violence erupted. This included communal violence between Buddhist Rakhine people and Muslim Rohingya villagers. The period also witnessed violence between groups loyal to the British and Burmese nationalists. The Rohingyas supported the Allies during the war and opposed the Japanese forces. The Japanese committed atrocities toward thousands of Rohingyas, including rape, torture, and murder. In this period, some 22,000 Rohingya are believed to have crossed the border into Bengal, then part of British India, to escape the violence. Some 40,000 Rohingya eventually fled to Chittagong after repeated massacres by the Burmese and Japanese forces.

In 1947, Rohingyas formed Mujahid Party which supported jihad movement in northern Arakan. The aim of Mujahid Party was to create a Muslim Autonomous state in Arakan. But after the 1962 coup d’etat by General Ne Win, military operations targeted them over a period of two decades. The prominent one was “Operation King Dragon” which took place in 1978; as a result, many Muslims in the region fled to neighboring country Bangladesh as refugees. Over 200,000 Rohingyas are said to have fled to Bangladesh following the ‘King Dragon’ operation of the Myanmar army. Officially this campaign aimed at “scrutinizing each individual living in the state, designating citizens and foreigners in accordance with the law and taking actions against foreigners who have filtered into the country illegally.” This military campaign, in effect, directly targeted civilians, and resulted in widespread killings, rape and destruction of mosques and further religious persecution.

During 1991-92 a new wave of atrocities forced over a quarter of a million Rohingyas to flee to Bangladesh. They reported widespread forced labor, as well as summary executions, torture, and rape. They said they were forced to work without pay by the Burmese army on infrastructure and economic projects, often under harsh conditions. Many other human rights violations occurred in the context of forced labor of Rohingya civilians by the security forces.

In its latest report issued on July 19, 2012 the rights group Amnesty International has slammed the increasing human rights abuses and arbitrary detention of Muslims in Myanmar’s western Rakhine state.

“It is the duty of security forces to defend the rights of everyone – without exception or discrimination – from abuses by others, while abiding by human rights standards themselves,” said Benjamin Zawacki, Amnesty International’s Myanmar Researcher.

The group accused both security forces and ethnic Rakhine Buddhists of increasing attacks on the Rohingya Muslims, killing, rape, arbitrary detention of Muslims and destroying their properties, urging the Myanmarese authorities to put an end to the violent action.

“Amnesty International has also received credible reports of other human rights abuses against Rohingyas and other Rakhine Muslims– including physical abuse, rape, destruction of property, and unlawful killings – carried out by both Rakhine Buddhists and security forces,” said the group in its report.

After the recent wave of ethnic cleansing (May-July 2012), according to the Amnesty report, between 50,000 and 90,000 people – with lower figures coming from the government and higher ones from UN agencies– are estimated to have been displaced.

Amnesty International has called on Myanmar’s Parliament to amend or repeal the 1982 Citizenship Law to ensure that Rohingyas are no longer stateless.

“Under international human rights law and standards, no one may be left or rendered stateless. For too long Myanmar’s human rights record has been marred by the continued denial of citizenship for Rohingyas and a host of discriminatory practices against them,” concluded the report.

Decades of discrimination have left the Rohingya Muslims stateless, with Myanmar implementing restrictions on their movement and withholding land rights, education and public services, according to another report released by Turkish charity group the Humanitarian Aid Foundation (İHH).

The report, released on 21st July 2012, states that Rohingya Muslims, who are seen as foreigners by nationalist Myanmar leaders and extremist Buddhists and are denied citizenship by the government because it considers them illegal settlers from neighboring Bangladesh, do not have the freedom to travel. In order to travel from one village to another, they have to pay taxes to the government.

The report underlines that there is a great number of Rohingya Muslims who are detained, subjected to torture and raped, adding that it was difficult to accurately determine their identities or numbers.

According to this report, Rohingya Muslims are not allowed to renovate their mosques or schools without the permission of the government, adding that anyone caught renovating these buildings without permission would be sent to jail. The report also adds that a new mosque or school has not been built in over 20 years.

They cannot benefit from the social services provided by the state, including health services, underlines the report, adding that Muslims do not have the right to work in government offices.

According to the report, a Muslim who commits an illegal act is not allowed to defend himself and is sent directly to jail. The report also underlines that Muslims can be forced to work for Buddhists or the government without any payment.