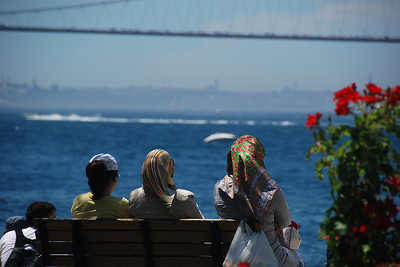 ISTANBUL – In Turkey, a well-known women’s talk show host has provoked ire among some Turks by offering a friend as a second wife to her husband. The overture thrust polygamy into the national spotlight.

“You have no shame! You are defending adultery,” a woman shouted at Sibel Uresin, an Islamic media personality, during a televised discussion program.

“I get lots of calls people asking me if their husbands can get another wife, what if their husband want to marry again or if I would be the second wife of a man,” Uresin said, defending her controversial stance on polygamy. “I brought this to my husband. I said I have this single friend and I told my husband I am just curious, if you want to marry her I give you my consent, do you want this?”

According to Uresin, her husband declined.

But the controversy has opened up a much wider debate over polygamy. Under the Koran, a man is permitted to take up to four wives. However, since the foundation of the secular republic in 1923, polygamy has been illegal in Turkey.

“In our research in the south and southeast of Turkey we found that about 11 percent are polygamous marriages,” Ilkkaracan explained. “But it’s definitely a problem in the west.  You find polygamous marriages in the big cities of Ankara, Istanbul and Izmir. It’s a huge problem for women because the second, third or fourth wives in a polygamous marriage, they don’t have any rights in a marriage. That means women have absolutely no right to an inheritance. In the case of a divorce, absolutely no rights – even to child custody, let alone any payments from the husband and so on.”

Ilkkaracan says it’s significant that the nation’s ruling AK party has remained silent over Uresin’s comments, despite widespread political criticism. She accuses the party of turning a blind eye to polygamy, adding there has not been a single prosecution under its decade-long-rule.

Turkey’s Minister of Family Affairs, Fatma Sahin, announced reforms this month to protect women — among them measures to prevent underage marriages. It’s not uncommon for older men to take women several decades their junior as second wives in a religious ceremony.

The new measures are part of the country’s drive to join the European Union, which has expressed concern over women’s rights in Turkey.

But columnist Akif Emre, who writes for the Islamist Yeni Safak daily, says Ankara has to be careful not to lose its Islamic identity.

“Turkish society values are very different from the European western culture. We cannot change,” noted Emre. “We don’t have to be same we have own cultural historical religious value which we have to keep always even if we join the European union or not. ”
On one of Istanbul’s main streets, the latest controversy over polygamy is divisive.

But a woman offered a dissenting view.

For now, there appears nothing to stop polygamy from continuing.