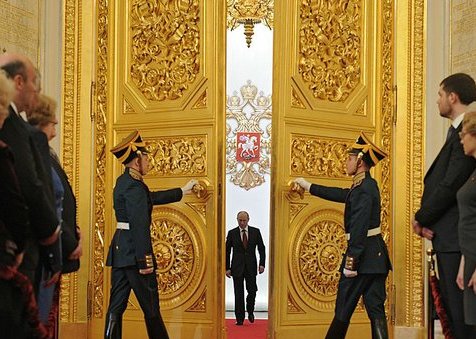 The Russian government has finally caught on that its political opposition is being financed by the US taxpayer-funded National Endowment for Democracy and other CIA/State Department fronts in an attempt to subvert the Russian government and install an American puppet state in the geographically largest country on earth, the one country with a nuclear arsenal sufficient to deter Washington’s aggression.

Just as earlier this year Egypt expelled hundreds of people associated with foreign-funded “non-governmental organizations” (NGOs) for “instilling dissent and meddling in domestic policies,” the Russian Duma (parliament) has just passed a law that Putin is expected to sign that requires political organizations that receive foreign funding to register as foreign agents. The law is based on the US law requiring the registration of foreign agents.

Much of the Russian political opposition consists of foreign-paid agents, and once the law passes leading elements of the Russian political opposition will have to sign in with the Russian Ministry of Justice as foreign agents of Washington. The Itar-Tass News Agency reported on July 3 that there are about 1,000 organizations in Russia that are funded from abroad and engaged in political activity. Try to imagine the outcry if the Russians were funding 1,000 organizations in the US engaged in an effort to turn America into a Russian puppet state. (In the US the Russians would find a lot of competition from Israel.)

“Non-governmental organizations” are very governmental. They have played pivotal roles in both financing and running the various “color revolutions” that have established American puppet states in former constituent parts of the Soviet Empire. NGOs have been called “coup d’etat machines,” and they have served Washington well in this role. They are currently working in Venezuela against Chavez.

Of course, Washington is infuriated that its plans for achieving hegemony over a country too dangerous to attack militarily have been derailed by Russia’s awakening, after two decades, to the threat of being politically subverted by Washington-financed NGOs. Washington requires foreign-funded organizations to register as foreign agents (unless they are Israeli funded). However, this fact doesn’t stop Washington from denouncing the new Russian law as “anti-democratic,” “police state,” blah-blah. Caught with its hand in subversion, Washington calls Putin names. The pity is that most of the brainwashed West will fall for Washington’s lies, and we will hear more about “gangster state Russia.”

China is also in Washington’s crosshairs. China’s rapid rise as an economic power is perceived in Washington as a dire threat. China must be contained. Obama’s US Trade Representative has been secretly negotiating for the last 2 or 3 years a Trans Pacific Partnership, whose purpose is to derail China’s natural economic leadership in its own sphere of influence and replace it with Washington’s leadership.

Thus, like England’s interference in the dispute between Poland and National Socialist Germany over the return to Germany of German territories that were given to Poland as World War I booty, Washington sets the stage for war.

China has been cooperative with Washington, because the offshoring of the US economy to China was an important component in China’s unprecedented high rate of economic development. American capitalists got their short-run profits, and China got the capital and technology to build an economy that in another 2 or 3 years will have surpassed the sinking US economy. Jobs offshoring, mistaken for free trade by free market economists, has built China and destroyed America.

On July 14 China’s official news agency, Xinhua, said that Washington was interfering in Chinese affairs and making China’s disputes with Vietnam and the Philippines impossible to resolve.

It looks as if an over-confident US government is determined to have a three-front war: Syria, Lebanon, and Iran in the Middle East, China in the Far East, and Russia in Europe. This would appear to be an ambitious agenda for a government whose military was unable to occupy Iraq after nine years or to defeat the lightly-armed Taliban after eleven years, and whose economy and those of its NATO puppets are in trouble and decline with corresponding rising internal unrest and loss of confidence in political leadership. http://www.spiegel.de/international/world/pew-study-finds-steep-declines-in-faith-in-politicians-and-capitalism-a-844127.html

© PaulCraigRoberts.org. This article has been published with the permission of the Institute for Political Economy, Dr. Robert’s blog.

Paul Craig Roberts is an American economist and a columnist for Creators Syndicate. He served as an Assistant Secretary of the Treasury in the Reagan Administration earning fame as a co-founder of Reaganomics. He is a former editor and columnist for the Wall Street Journal, Business Week, and Scripps Howard News Service who has testified before congressional committees on 30 occasions on issues of economic policy.