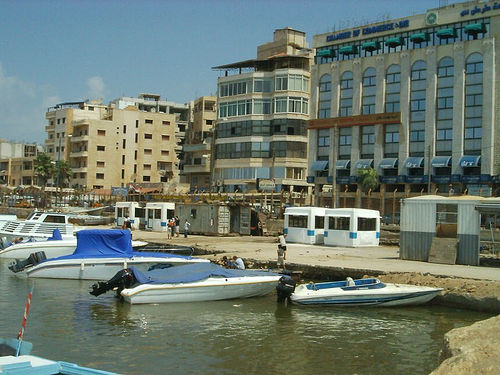 This Middle Eastern haven, however, lies just 60 miles west of Homs, the battle-broken city that is the center of gravity in the civil war that has shattered Syria, killing more than 16,000 people and displacing a quarter of a million more. Tartus, though, has become a refuge for the country’s minority Alawi Shiite population. “As an Alawi, I don’t really care about Bashar al-Assad,” says 30-year-old Majed, referring to Syria’s president, who is also Alawi. “The only thing that concerns me is security.”

Eight months ago, after losing his job and fearing for his safety, Majed escaped Homs. (Like others interviewed for this article, Majed chose to keep his last name private for security reasons.) In Tartus, he has found work as a telecommunications salesman. “Everyone thinks we defend the regime and the authorities, but the opposition has given us no choice but to flee to the coast,” he says. “It’s like I’m not even in the Middle East here, I feel so secure.”

Similar sentiments are easy to find in Tartus. Fayez, a 35-year-old import-export business owner, also abandoned Homs last year after opposition fighters operating under the banner of the Free Syrian Army kidnapped his cousins and wrote “Get out” on the door of his home. “Revolutionaries,” Fayez describes them sarcastically, holding up his fingers in bitter air quotes. “Tartus is my new home. I don’t ever intend to leave,” he says. “In the end, Bashar al-Assad will go and our children will be left, and we have to defend their future here.”

Eighteen months of fighting have hardened both men’s sectarian resolve. In their view, Alawites are under attack by a Sunni majority, which uses its religious identity as an organizing principle for mobilizing the militias operating under the Free Syrian Army umbrella. In turn, the coastal Sahel region is the only safe haven, and this stretch of land — encompassing the port cities of Latakia, Baniyas, Jableh, and Tartus, and the mountains separating them from the rest of Syria’s plains — must be protected against Sunni encroachment at all costs.

Far removed from the shabiha, Assad’s vigilante militias notorious for carrying out the regime’s crackdown against the uprising, these men in the Sahel are neither fanatic nor armed. But they represent a demographic force creating another de facto divide in the country. As fighting takes place along Syria’s central artery running northward from Homs to Idlib, Alawites are increasingly setting up shop in the Sahel, looking to cordon themselves off from the chaos that they believe will come as Assad’s grip on the country weakens.

In several conversations, Alawites said that thousands of families have relocated to the coast. Others spoke of friends and family members who have not yet moved but have purchased homes there in anticipation of a shift in fortunes. Although the real figure is impossible to determine, visits to Damascus, Homs, and Tartus indicated that such numbers are plausible. Official tallies — from the UN agencies operating inside Syria, for instance — are nonexistent.

Such movement could be an early harbinger of territorial entrenchments of Syria’s sectarian fault lines. “At this point, the regime is not looking at itself as a small state within Syria,” says one Alawi academic who lives in both Damascus and Latakia. “It wants all of Syria, and it will stay that way until the last possible moment.” Alawites talk of a return to the coast is specious, he says, the product of a regime “game” of hyping threats in order to instill fear in minorities. Still, he adds, “Just like the weapons game, the sectarian game is a dangerous one. People are hearing rhetoric like, ‘We want to annihilate Alawis. We want their deaths.’ You never know if it will pass a point at which you can’t stop it, you lose control.”

That fear is rooted in the community’s historical marginalization. Throughout centuries of Mamluk and Ottoman rule, Alawites, a heterodox offshoot of Shia Islam, largely confined themselves to the mountains east of Latakia. Aside from tiny minorities in the villages around Homs and Hama, they emerged from their “wild hills” only occasionally to work as menial laborers. After World War I, French mandate authorities codified these isolationist impulses, creating a sovereign Alawi territory extending from Latakia to Tartus in 1920. Though Alawi leaders initially cheered their region as a bulwark against Sunni domination of the interior, even French protection could not make the state viable. Alawites constituted a majority of the population, but city-based Sunni and Christian communities lagged behind by only a third, possessed far greater wealth and education, and were strongly in favor of union with Damascus. By 1937, the experiment had failed; the state was incorporated into modern-day Syria.

Alawites eventually entered the Syrian mainstream via new national military and educational institutions in the cities, assuming posts in the full spectrum of professions: public service, the security forces, academia, and business. Eventually, that process put Hafez al-Assad, an Alawite air force officer, in position to seize the presidency in a 1970 coup. Today, Alawites constitute about 12 percent of Syria’s population of 22 million, primarily concentrated on the coast but with significant numbers in Damascus and Homs. The mainstreaming process has not been even or complete. Like his father, Bashar al-Assad has kept the top ranks in the military and security services reserved for well-connected Alawites. Meanwhile, fueled in large part by a stifling ban on discussion of sectarian issues, identity within Syrian society remains strongly determined by sect.

Today in Damascus, people living in Alawi districts such as Mezze 86, a middle-class neighborhood, are weighing their future. Ask them how they feel about the city, and it is not uncommon to hear a refrain repeated: “Damascus is my maskan, my residence, but Latakia is my ma’man.” Ma’man translates roughly to “home” but derives from a root meaning “security.” It means, more precisely, “the place where I am safe.” Khalil, a medical student born and raised in Mezze 86, is only in his 20s, but he repeats it, too. “I have friends, and everything is comfortable for me here,” he explained to me in May, “but something inside me still feels alienated.” For now, he chooses to remain in Damascus to finish his studies, but he keeps one eye trained on encroaching opposition forces and the other on the coast. “If it becomes dangerous for us Alawis, then we can’t stay here.”

But although the Alawites are minorities, they hold disproportionate power, which makes it unlikely that they would accept a Sunni leadership without a fight. “If Assad leaves tomorrow morning, the war in Syria will not end,” says Firas Abi Ali, an analyst at the London-based risk consultancy Executive Analysis. “A core of Alawis would continue fighting. The conventional army would become a lot weaker, since so many powers are centered in the presidential office. But you would end up with a very well-armed core still fighting with tanks, special forces, possibly airplanes.”

The most likely scenario, Abi Ali says, is that rebel forces would concentrate on Daraa, Deir al-Zour, the Homs-Idlib corridor, and rural areas around Aleppo and Damascus, while government forces could continue to hold Aleppo, Damascus, and the coastal areas. As the capabilities of the two sides equalize, fighting would gradually progress into conventional warfare, with much of the Alawi civilian population forced toward the coast.

The problem is what comes afterward. As history has shown once before, the odds are stacked against the viability of a state in the mountains of the sea. For one, there is the coast’s restive Sunni population. Even Latakia, commonly cast as an Alawi stronghold, is more than 50 percent Sunni province-wide and more than 70 percent Sunni in the city itself. Baniyas, too, is evenly split. Overwhelming force has thus far been sufficient to quell protests in both cities, but, according to one Latakia-based activist, even mountain areas such as Jabal Akrad and Haffeh are beginning to see Free Syrian Army activity. Many Sunnis of means are leaving the city for Turkey, including the activist’s own family, fearing a final showdown there as Alawis retreat.

A fledgling “state within a state” would then face the same economic dilemmas that doomed it a century ago. Import-export businesses fuel the economies of Tartus and Latakia, and those would suffer if a de facto partition develops further, since merchants would be unable to move their goods to market in Damascus and Aleppo across a hostile border. Although there is some discussion among the Alawi elite that they might find oil and gas on the coast offshore, according to Abi Ali, sectors such as tourism and agriculture are not enough to sustain an Alawi state on their own. The entity’s regional neighbors, wary of their own domestic secessionist movements, would be loath to recognize it.

With these odds in mind, Alawi elites are divided on the future of the coastal mountains, seeing little choice but to fight for control of the entire country. According to one high-ranking Alawi general in Homs with direct knowledge of the thinking in Damascus, the regime leadership is not formulating any plans for separation. At the same time, he says, the demographic changes are happening organically on their own, driven by the violence in central Syria and fear of the unknown in Damascus. He has already sent his own family coastward, citing the area’s security and environment as “suitable for us.”

“We’re Alawis, so we can’t live among the other groups,” he says. “We have a different, more open culture, so the coast is best for us. This is our only option.”

As the war grinds on, other possibilities may become more attractive to the general. These are still the early days of Alawi migration, a relatively mild flow that could be stanched if a political deal convinces enough of the population that they would have a stake in the country’s future government. But Syria’s chronically squabbling opposition figures have so far failed to make such overtures, while Assad’s forces, fighting what they consider an existential battle, appear unlikely to put down their weapons voluntarily. Whether those forces choose to make their final battle in Damascus or retreat to the mountains, the stage in Syria is set for a long war and deepening social divisions.

For Majed, settling comfortably into his new home in Tartus, there is no going back. “It’s true that there aren’t the right ingredients for a state, but the Syrian coast is basically the center of gravity for the sect,” he says. “If the war continues in Syria, I’ll be among the supporters of separation. There is enough blood.”