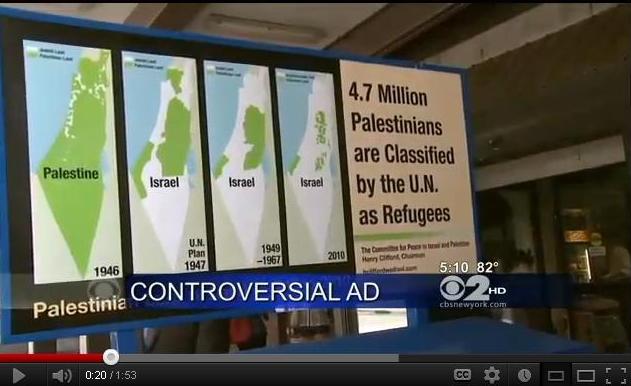 A seemingly endless debate over politics, religion and territory is coming to a train station near you.

An explosive ad about Israel is now igniting a firestorm of controversy.

The display shows shrinking Palestinian territory in Israel over the years and refers to 4.7 million Palestinians there as refugees.

The ads are appearing in 50 Metro-North stations.

At the train station in White Plains, the politically-charged ad was raising eyebrows.

“That’s quite amazing if you ask me,” one man told CBS 2′s Scott Rapoport.

Some Jewish leaders said they were concerned.

“I think the ad is very offensive, it’s certainly offensive to Jews,” said Dovid Efune, the the editor of the Jewish newspaper “The Algemeiner.”

Efune said the ad is anti-Semitic.

“It paints Jews as aggressors, as imperialists, as people that are stealing or taking land from others,” Efune said.

Henry Clifford, the chairman of a group called the Committee for Peace in Israel and Palestine, spent $25,000 of his own money on the ads.

“The Palestinian people have lost most of their homeland and the map shows exactly what is happened to them,” Clifford said.

When asked what he hopes to get out of the ad campaign, Clifford responded by saying he wants to “educate people.”

“Simply to open their eyes and let them see what has happened on the map,” he said.

The advertisements have caught the eye of commuters in White Plains as well.

“I thought it was all settled back in the 1970s with the 6 Day War,” one man responded.

“My reaction is why is there an anti-Israel ad sitting here at the train station?” asked Cliff Argintar, of Hoboken, N.J.

Efune is calling for the Metropolitan Transportation Authority to take the ads down. However, the MTA said it doesn’t restrict ads on the basis of viewpoint and while it doesn’t endorse the ad, the posters will remain up.

The Anti-Defamation League, for its part, called the ads “Deliberately misleading, biased and fundamentally anti-Israel.”