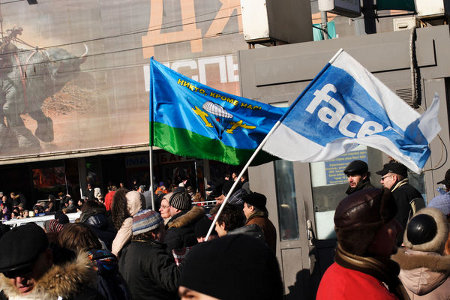 “It is a cliché of optimistic Western discourse on Russia and China that they must evolve toward democratic liberty,” said Michael Ignatieff, the former leader of Canada’s Liberal party, in the Latvian capital of Riga earlier this month where he addressed the St. Petersburg International Economic Forum. But “we should not assume there is any historical inevitability to liberal society,” he warned, “any more than it made sense to predict in 1950, say, that both Chinese and Russian totalitarianism were doomed to crumble.”

That is clearly William C. Martel’s assumption, however, when he writes in The Diplomat of an “authoritarian axis” between China, Iran, North Korea, Russia Syria and Venezuela, one that “signals growing anxiety on the part of its members that they are ‘behind the curve’ of history. Simply put,” he believes, “these states are on the wrong side of history, politics and economics—and they know it.”

It’s doubtful that they do. Hugo Chávez and the Iranian mullahs probably believe that they are on the right side of history in fact while the Chinese can’t imagine themselves “behind the curve” in many respects. To the extent that Vladimir Putin does, in the economic realm, he seeks to mend the imbalance with the West through further liberalization, if at a disappointingly lackluster pace. Indeed, only Syria’s Bashar al-Assad can really said to be “losing” at this point.

To gobble together these six states because they are authoritarian seems rather arbitrary. If adhering to an illiberal philosophy, political or economic, is the sole criterion, many more countries could join their club. But wait, there’s more. According to Martel, the six are working together on an anti-American agenda.

He is right to point out that the six “fear the power and influence of the United States and the West” but not in the sense that “democratic values, particularly transparency in government and society, put at risk the survival of these authoritarian, repressive governments.”

The Chinese feel the pressure to reform from within, not from across the Pacific. It is their own burgeoning middle class that demands greater transparency and more political freedoms, not the United States. Rather, the Obama Administration, in its attempt at “strategic reassurance” of China, has been largely quiet on that front lately because it doesn’t particularly matter to America’s interests how the Chinese elect a president.

The argument doesn’t fly at all for Iran, Syria nor Venezuela. If the survival of these regimes is at stake, it is not because rather in spite of American involvement.

When millions of Iranians took the streets in 2009 to protest the possible falsification of the presidential election results, President Barack Obama stayed mum. Dozens of Syrians are dying every day at the hands of Assad’s henchmen yet America has hardly lifted a finger. Chávez doesn’t even invite mockery anymore, let alone action. Except for the Venezuelan president himself, there are probably few who consider him more than a nuisance to Washington’s policy in Latin America.

The only country where America’s championing of “democratic values” had made a dent is Russia so it should not come as a surprise that Putin has “turned to strident anti-American rhetoric to bolster his domestic power” even if, throughout his first eight years as president, the blatantly anti-Russian George W. Bush Administration could hardly have had a more accommodating man in the Kremlin.

After the United States unilaterally withdrew from the Anti Ballistic Missile Treaty, Putin quickly negotiated a new strategic arms reduction treaty that was signed in 2002 and superseded last year by New START which further reduced Russia’s nuclear weapons arsenal, arguably one of the few claims it has to being a greater power. So much for the notion that, “No principle seems more important, particularly to Russia, than to resist and restrain American power and influence whenever the opportunity arises.” Unless Putin happened to miss an opportunity, not once but twice?

What is perceived as “anti-Americanism” on his government’s part, Putin regards as a necessary counter to covert American interference in Russia and its former Soviet sphere through Western nongovernmental organizations that claimed to advance democracy while they supported the “color revolutions” in Georgia, Serbia and Ukraine during the last decade which replaced pro-Russian governments in these countries with pro-Western ones.

Indeed, Putin wrote as much this year when he denounced the activities of “pseudo-NGOs” that “try to destabilize other countries with outside support.”

Russia doesn’t always agree with American foreign policy and, within what it considers to be its own sphere of interest, does work to contain American influence but to see in that proof of an anti-Americanism that overrides every strategic imperative is frankly ridiculous. The opposite is more likely to be true: Russia resists American power when it is deployed against it. Case in point: the NATO missile shield in Europe which no one honestly believes is exclusively designed to deter Iran.

Martel goes on to write that “we see strong evidence that they actively coordinate their foreign policies” but he is reading too much into instances where the six happen to agree while completely ignoring examples of disagreement among them.

For example, Martel refers to Russia’s selling of arms to Iran but neglects to mention that it has suspended such weapons sales in accordance with United Nations sanctions that it signed up for. Tehran subsequently filed suit against the Russians with the International Court of Arbitration in Paris, demanding reparations. That is hardly the sort of thing an ally would do.

Martel actually touches on what is really going on when he writes that, “these states, sensing weakness and confusion in American policy from wars, recession and political divisions in Washington, reacted accordingly.”

Miguel Nunes Silva observed the same thing at the Atlantic Sentinel last year. In the absence of decisive American or Western power, he wrote, “it is the intelligence and military establishments of the middle players that are forced to bear the brunt—and take the heat—of the necessary hard power decisions.”

Perhaps Martel is so steeped in the Cold War experience of geopolitics that he finds it hard to imagine a world in which middle powers like today’s Russia, Iran and a rising China dare challenge America’s economic and political orthodoxy but the world was run for centuries on the basis of ad hoc and shifting alliances (“coalitions of the willing,” if you will) before the Soviet Union and the United States became so powerful that “superpower” replaced “greater power” and the map could neatly be divided into red and blue camps.

That world is gone now. It may be more practical to get used to it than imagine an irrational dislike of one’s values on the part of one’s competitors.

Nick Ottens is an historian from the Netherlands who researched Muslim revivalist movements and terrorism in nineteenth century Arabia, British India and the Sudan. He has been published in Asia Times Online and The Seoul Times and is a contributing analyst for the geostrategic consultancy Wikistrat.