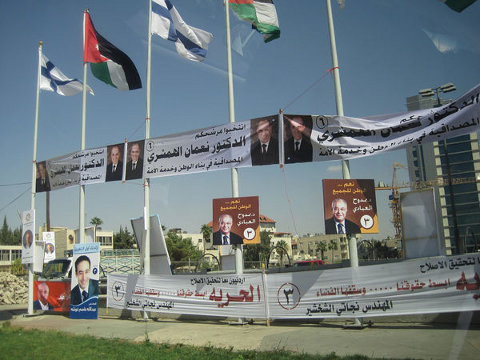 (Reuters) – Jordan’s King Abdullah instructed parliament on Thursday to reconvene next month to amend a controversial election law that has provoked Islamist disaffection and a potential boycott of polls that could deal a blow to democratic reforms.

A palace statement said the monarch’s message was conveyed in a meeting with heads of the lower and upper houses of parliament, composed mainly of pro-government deputies with strong tribal backing.

“The king instructed convening an extraordinary session of parliament at the start of next month to undertake changes in the election law to ensure wider political representation on the level of the nation,” a palace statement said.

The monarch’s intervention could dissuade the Islamic Action Front (IAF), the political wing of Muslim Brotherhood and by far the largest organized political grouping, to withdraw a threat to boycott elections after the law was approved by parliament.

Unlike demands for ousting longstanding rulers in popular uprisings that have swept the Arab world, protests in Jordan have focused on holding free elections and fighting corruption.

The king is viewed as a unifying force and arbiter among competing tribes from the East Bank and Jordanian citizens of Palestinian origin from the West Bank.

The monarch said elections he wants held later this year must bring wider representation resisted by a conservative tribal establishment that fears empowering disenfranchised Islamists and Jordanians of Palestinian origin.

“All the laws regulating political life will remain theoretical if they do not lead to early parliamentary elections,” the monarch was quoted as saying.

The king’s move is a blow to a rubber-stamp assembly which promotes the interests of a tribal political establishment run by native Jordanians holding a tight grip on power.

Jordanians of Palestinian origin are excluded from the army and senior positions, though they are pillars of business.

The electoral law that was approved last week leaves intact a division of seats that grossly underrepresented the largely Palestinian dominated cities, which are Islamic strongholds in favor of sparsely populated rural tribal and Bedouin areas – the bedrock of support for the Hashemite dynasty.

The law allocates only 17 seats to candidates contested by parties in a proposed 140-seat assembly while magnifying the voting clout of native Jordanian constituencies whose voting power far outweighs voters in urban cities, where most of the country’s seven million citizens of Palestinian origin reside.

The monarch urged parliamentarians to boost the number of seats set aside for political parties, in a clear gesture to the Islamists.

The Muslim Brotherhood says it is not turning its back on parliamentary democracy but protesting what it says is an erosion of democratic gains that has made elections meaningless.

“The motive behind passing the law is to continue to maintain a monopoly on power and to deprive people of their right of choosing a legislature that expresses their will,” Sheikh Hamza Mansour, head of the Islamic Action Front, said.

Government officials say they are committed to holding fair elections that address long standing criticism of vote-rigging and fraud that has marred previous elections.