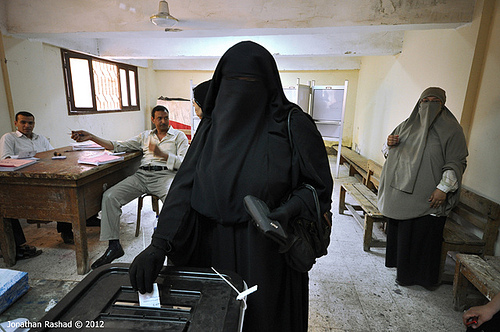 Second round of voting, Egypt

On June 14, when an Egyptian court handed down a decision dissolving the country’s first democratically elected parliament, the revolutionary camp bemoaned the state of their country.

Ten days later, many of the same revolutionaries celebrated in Tahrir Square as fireworks went off and a Muslim Brotherhood member was announced as Egypt’s first freely elected president.

The presidential election of Mohamed Morsi, a formerly imprisoned member of the Muslim Brotherhood, is only the latest eye-opening turn Egyptian politics have taken. The Arab world’s most important and populous country is struggling to forge a new political order after the downfall of an entrenched dictatorship.

How should you make sense of it all? Below is AlterNet’s guide to help you do just that. From the court decisions to the power of the presidency, here’s a primer on Egypt’s current political situation.

1. What was the outcome of the presidential election?

The top two vote-getters in the first round of the presidential elections were Mohamed Morsi, who only became the Brotherhood’s candidate after their first choice was disqualified, and Ahmed Shafiq, a former prime minister under Hosni Mubarak. They advanced to the second round of polling, which was held from June 16-17. After delays in announcing the winner due to backroom negotiations between the Brotherhood and the ruling military council, Morsi was pronounced the winner on June 24.

Morsi won 52 percent of the vote nationwide, compared to Shafiq’s 48 percent. Morsi’s performance represented a victory for an unwieldy coalition of revolutionaries and moderate Islamists, both of whom had played pivotal roles in the January 25 revolution that brought the end of Mubarak’s dictatorial rule. But for all the celebrations in Tahrir, Morsi assumes office under a cloud of uncertainty.

2. What is the relevant context for these changes in Egyptian politics?

The broader context for this moment in Egyptian politics is best understood by briefly examining the last 30 years of the country’s history. When Mubarak took over from Anwar Sadat, he largely followed his predecessor’s tack. Mubarak’s one-party rule oversaw the continued building of a repressive security apparatus that quashed political dissent, whether it was from the Muslim Brotherhood or radical socialists. This authoritarian rule was bolstered by Western support, particularly from the United States. After Egypt signed a peace treaty with Israel, the U.S. began sending billions in military aid to Egypt each year, and developed a close relationship with the Egyptian military and Mubarak’s regime. Under Mubarak, neoliberal economic policies favorable to Western corporations were also implemented, which exacerbated economic inequality in Egypt.

For decades, Egyptians lived under internal repression, economic inequality and a moribund political process with elections that were frequently rigged. This produced simmering political discontent in the country, which was expressed in a number of ways throughout Mubarak’s rule. But the final straw for Mubarak came after Tunisians toppled their dictator. The spirit of revolution traveled to Egypt, and on January 25, protests in Cairo began to erupt. By early February Mubarak’s rule was shaky. On February 11, he resigned, paving the path for Egypt’s democratic transition led by a military council of generals.

3. What does Morsi’s win mean?

On a symbolic level, the fact that Morsi is Egypt’s new leader is huge. Morsi is a member of the once-banned Muslim Brotherhood (although he technically resigned after winning the presidency), the party that was Mubarak’s main opposition. Morsi himself spent months behind bars under the Mubarak regime, and his presidency comes just weeks after Mubarak was sent to prison. There’s also the significance of Morsi becoming the first president influenced by political Islam to be elected in the Arab world.

But when it gets to details, Morsi’s win sounds a lot less victorious. Morsi enters the presidency with his powers largely undefined. A new, post-revolution constitution has yet to be written, and the Supreme Council of the Armed Forces (SCAF) — the group of military generals who have run Egypt since Mubarak’s ouster — has indicated it will take a leading role in writing the constitution. A June 17 declaration from SCAF further limits Morsi’s power; the declaration puts all matters relating to the army in SCAF’s hands.

In addition, Morsi will also have to contend with “de facto and bureaucratic limitations” on his power, as Al Jazeera’s Gregg Carlstrom and Evan Hill explain. For example, “The interior ministry, which controls Egypt’s police and paramilitary Central Security Forces, remains a powerful fiefdom” that has yet to be reformed, to the chagrin of human rights activists. The question is whether Morsi will challenge the power of the security forces, or disappoint liberals and revolutionaries by aligning himself with the military and leaving the security forces be.

4. What about the Egyptian court decisions the week before the presidential election?

10 days before the historic presidential elections, Egypt’s political elite made decisions that threw the country into political turmoil. A pair of rulings from Egypt’s high court held that the country’s first democratically elected parliament, which was dominated by the Muslim Brotherhood and more conservative Islamists, was to be dissolved and that Mubarak-era candidates for office could run. Parliament was dissolved because the new system set up for the elections, in which a third of the seats once reserved for independents could also go to political parties, was deemed unfair to independents.

The moves were immediately denounced as a “soft coup,” although some observers aptly noted that a coup implies the military taking over power it didn’t have, and in this case, SCAF already had all the power.

Whatever you want to call it, it was a bold move by SCAF to preemptively grab power before a president could assume office. The Egyptian Parliament represented a fruit of the revolution, and had challenged SCAF’s authority.

Compounding the court decisions by a judiciary with close ties to the former regime were the SCAF declarations that came after it. SCAF issued a constitutional addendum to the temporary March 2011 Egyptian Constitution that greatly enhanced its powers, effectively entrenching “the military establishment as a de facto fourth branch of government,” as analyst Ahmed Morsy put it. The addendum gave SCAF legislative power, presidential power and the authority to oversee all military matters. It also gave SCAF broad power in shaping a new Egyptian constitution.

Taken together, the dissolution of Parliament and SCAF’s broad powers pose a deep challenge to Morsi, the new president. Many observers of Egyptian politics predict a long and intense power struggle between these sectors of power to play out in the coming years.

5. Where do the revolutionaries fit in?

The group of Egyptian revolutionaries–liberals, socialists, communists, labor activists, Egyptian youth and more–that sparked the 2011 uprising remain engaged in the political process since Mubarak’s ouster. Many have spoken out against military trials against civilians and the continued power of a small group of military generals. Some activists have also grown to distrust the Muslim Brotherhood after the Islamist group, at times, courted the military generals and refused to join some of the protests condemning SCAF’s human rights abuses. There is also lingering distrust on the part of the revolutionary camp about the Brotherhood’s secretive nature, and a fear that the party could grab all the power in the country.

During the presidential elections, the revolutionary vote was split among a number of candidates. But none of those candidates won, and some activists called for a boycott of the presidential vote that pit Morsi against Shafiq. A boycott never got off the ground, and the Brotherhood courted various factions of the revolutionaries to varying success. The awkward Brotherhood-revolutionary alliance was solidified just days before the election, when a coalition of non-Islamist leaders endorsed Morsi. But the revolutionaries stressed that their endorsement was more a vote for democracy than for Morsi. Still, it appears that having the backing of some non-Islamist activists bolstered Morsi’s hand days before SCAF announced the winner of the election.

6. What comes next for Egypt?

There are a number of crucial dates and decisions in the near future that will impact Egypt’s political transition. The most important date is June 30, the day the Egyptian military says it will hand over power to civilian rule. Whether the handover will actually be meaningful is another question. The answer depends on what power Morsi will have, what power the military keeps and the reaction of the revolutionary forces to how that plays out.

Additionally, the Egyptian court system will continue to play a big role moving forward. There is a case pending that calls for the dissolution of the Muslim Brotherhood, and an ongoing court battle over whether the military can arrest civilians (SCAF asserted this power, but an administrative court struck the decree down). Perhaps most importantly, the process of writing a new constitution grinds on, with a court decision on whether to dissolve the constituent assembly tasked with writing the constitution pending as well.

Alex Kane is AlterNet’s New York-based World editor, and a staff reporter for Mondoweiss. Follow him on Twitter @alexbkane.