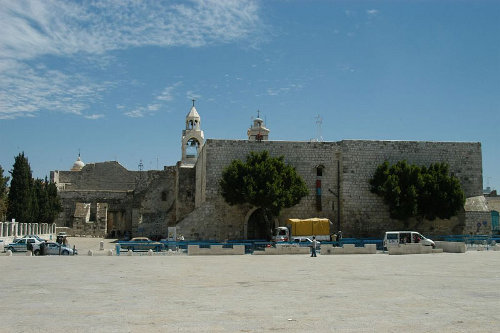 Church of the nativity, Bethlehem

BETHLEHEM, West Bank (AP) — The Palestinians on Friday persuaded the U.N. cultural agency to list the Church of the Nativity — the place where Christians believe Jesus was born — as an endangered World Heritage site despite misgivings by churches in charge of the basilica.

The Palestinians hailed the nod by UNESCO as a step forward in their quest for global recognition of an independent Palestine in the West Bank, Gaza and east Jerusalem, captured by Israel in 1967.

The centuries-old basilica is located in a part of the Israeli-occupied West Bank where the Palestinians have self-rule. UNESCO’s decision was seen by them as validation of their rights to the territory.

The Palestinians had argued that the shrine faces imminent danger, both because of overdue repairs and Israel’s continued occupation of the West Bank.

Israel and the U.S. strongly opposed the emergency bid, arguing that the church is not under threat, a position backed by a U.N. experts committee.

Israeli officials have said they don’t object to the church being listed, but reject the “endangered” label which implies culpability of Israel, which in practice remains the ultimate sovereign in the West Bank.

Israeli Prime Minister Benjamin Netanyahu said the Palestinians are “engaging in unilateral actions that only distance peace” and that UNESCO is driven by political considerations.

Palestinian Foreign Minister Riad Malki said the Palestinians now plan to submit more sites in the West Bank, Gaza and east Jerusalem. The new bids could stir more political tensions, particularly in east Jerusalem, which Israel annexed to its capital after the 1967 war.

Ashrawi said Friday’s vote is the beginning of a process.

“Our identity, our place in civilization, in history, are being recognized, are beginning to be safeguarded in the face of the Israeli occupation’s encroachment, the confiscation of our land, our culture,” she said.

The U.S. ambassador to UNESCO, David Killion, said Washington was “profoundly disappointed” by the vote. The U.S. has been trying to block the Palestinian recognition campaign, and withdrew tens of millions of dollars in funding from UNESCO after the Paris-based agency accepted the Palestinians as a state member last year.

Joining UNESCO was part of a wider Palestinian attempt to win global recognition for a state of Palestine in the territories Israel occupied in 1967.

Israelis and Palestinians were to have negotiated the borders of a Palestinian state, but two decades of intermittent talks produced no results. The last round broke off in 2008, and the Israeli and Palestinian leaders have failed to agree on rules for renewing them.

Palestinian President Mahmoud Abbas, who heads a self-rule government in charge of 38 percent of the West Bank, says negotiations with Israel remain his preferred choice, but wants global recognition to improve his leverage. An attempt to win full U.N. membership has stalled, but meanwhile Palestinians are pushing for membership in U.N. agencies.

In their first move at UNESCO, they submitted the Nativity Church and a nearby pilgrimage route as endangered heritage sites, asking to fast-track the nomination rather than go through the normal 18-month procedure.

They argued that the church is in urgent need of repairs, particularly a leaky wooden roof. Palestinian officials said foreign donors promised $20 million for the work, but so far have paid only $3 million, not enough to get started.

Palestinians argued that Israel’s continued control over the area also threatens the site.

A decade ago, when Israel launched a major offensive against Palestinian militants, the church was caught in the crossfire: Palestinian gunmen holed up inside for more than a month, with Israeli tanks and troops surrounding the shrine.

Referring to the violent standoff in Friday’s statement, Netanyahu put the blame on the Palestinians.

“The world needs to remember that the Church of the Nativity that is so sacred to Christianity was desecrated in the past by Palestinian terrorists,” he said.

Today, Bethlehem is ringed on three sides by walls of cement slabs and fences of Israel’s separation barrier — to Israel a defense against Palestinians militants, and to Palestinians a blatant land grab disguised as a security measure.

The churches in charge of the shrine — Roman Catholic, Greek Orthodox and Armenian — also expressed concern, apparently fearing a World Heritage designation would lead to interference by the Palestinian government and the U.N.

The church is run according to a 19th century codex, known as the Status Quo which assigns responsibilities for upkeep that are jealously guarded by each denomination.

Palestinian officials say they’ve addressed the concerns by the churches.

In Bethlehem’s Manger Square, next to the shrine, reaction was relatively muted Friday.

A celebration organized by local officials only brought several dozen people to the square, including youngsters in yellow T-shirts with the inscription “I love Jesus.”

Shop and hotel owners routinely complain they lose business because Israeli-run tour buses stop in Bethlehem just long enough for a visit to the church and then take pilgrims back to Jerusalem, a few kilometers (miles) to the north. During a recent visit, most shops on Star Street, part of the pilgrimage route, were closed.

Nabil Ziacaman, a souvenir shop owner, said Friday’s vote is a step toward recognizing a state of Palestine, but won’t help his business. “Everyone in the world knows the Church of the Nativity and where it is located,” he said. The new label “won’t bring more tourism.”

Christina Yacoub, 20, from Lakeland, Florida, was more enthusiastic. Emerging from the church, said she expected more pilgrims now. The vote “shows how important this country is.”