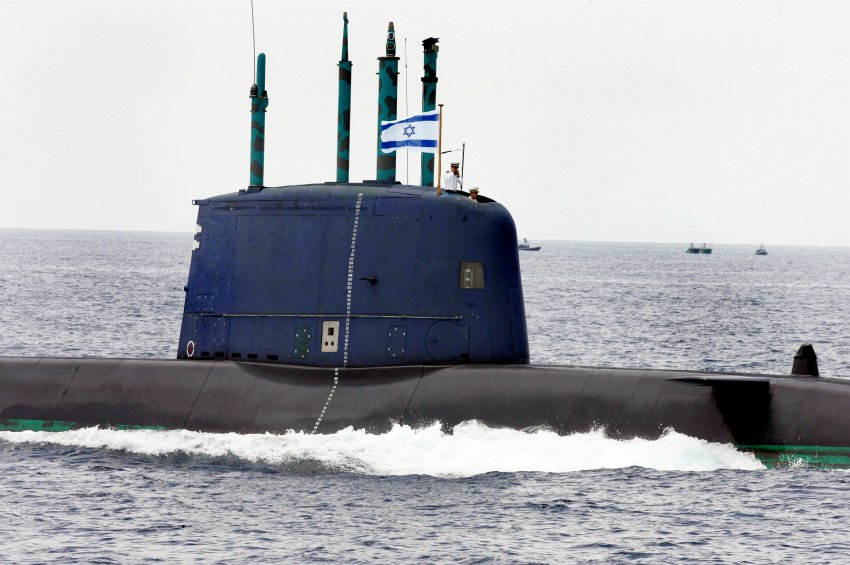 Israeli submarine "Dolphin" sails along the Mediterranean Sea near the coastal city of Tel Aviv during special naval maneuvers ahead of Israels 60th independence anniversary on May 5, 2008. The "Dolphin", a German-built submarine, is 56.4m long with a cruising range of 4500 nautical miles. It is armed with ten 21-inch multi-purpose tubes for torpedoes, mines, missiles and decoys. AFP PHOTO/GALI TIBBON

Der Spiegel has just published an important article about the Dolphin submarines Germany has been selling to Israel over the past fifteen years.  Israel now has three, with a fouth and fifth on the way and sixth in the pipeline by 2017.  Sale of up to nine submarines is contemplated by both sides.  The ostensibly big news in this story is that both the Israelis and Germans knew the subs were nuclear weapons-capable, but the Germans had denied it.  In fact, they contain a special secret hydraulic launching system designed for nuclear cruise missiles.

But this isn’t the real news since any reasonably intelligent person would know that any submarine Israel would buy would carry nuclear weapons.  There are two truly newsworthy aspects of this story: one reported and the other not.  The reported one is that German chancellor Angela Merkel officially denied the subs would carry nukes all the while knowing they would.  That is a big story, no doubt, in Germany.  In Israel it’s pretty much a yawn, given that Israelis are used to their leaders lying through their teeth on national security and military matters.

But what has not been reported and is probably the most important aspect of this story is the major upheaval it will introduce in the Middle East balance of power.  Der Spiegel notes that the nukes on board the Dolphins will offer Israel a “second strike” capacity against any enemy who thinks to level a crippling pre-emptive blow against it.  Ostensibly, this will make a power like Iran, after it would get nuclear weapons (if it would), think twice about using the nukes since Israel’s cruise missiles will level entire Iranian cities.

But the question must be asked: who in the Middle East has the power to mount such an attack against Israel?  No one.  Iran doesn’t even have nukes and certainly can’t attack Israel without them.  There simply is no other country that could do so.  Perhaps in one’s wildest dreams one could imagine Israel and Turkey tussling with the Turks thinking of striking a crippling blow against Israel.  But essentially, no one in the Middle East could mount a first strike.  So in effect Israel is getting a weapon for a purpose that doesn’t exist.  Why should it need second strike capacity when there is no first strike possible?  It’s a little like running for president even before you’ve been elected to the school board.

From this flows an even more important development.  I recently posted about a conversation I had with noted Israeli nuclear weapons analyst Avner Cohen about the hidden impact of Israel’s nuclear arsenal on strategic military and policy matters that one would never think could be influenced by nuclear weapons.  Namely, that a nuclear-weapons-enabled Israel has no reason to compromise either with its neighbors or with its allies on any major issues like ending Occupation, returning to 1967 borders, etc.  Just as North Korea’s nukes have enabled it to maintain a surprisingly belligerent posture towards its enemies and even its Chinese friends, Israel too can thumb its nose at anyone asking it to make concessions it isn’t prepared to make.

An Israel with nukes can even tell a U.S. president that he can take his settlement freeze and shove it.  That’s precisely what Bibi Netanyahu did and Pres. Obama didn’t have the guts to pursue the matter.  After all, what leverage did Obama have unless he was willing to go to the mat and invest everything in winning?

There is another macabre irony in Germany’s sale of these weapons to Israel.  The state which inflicted the Holocaust on the Jewish people and incinerated 6 million of them in the ovens of Poland, has now dealt Israel the ability to incinerate any Arab country so bold as to stand in the way of Israeli hegemony over its little slice of the Middle East.  If an Israeli missile is ever fired at an Arab state and inflicts major damage upon it, this will be one of the first things the media will mention.  And Germany will then, too late, have some soul-searching to do about giving Israel the power to inflict its own Holocaust on the Mideast.

Ah yes, the right-wing naysayers will protest at references to an Israeli-inflicted Holocaust because it can’t and won’t happen here (or I should say, there).  Israel would never deliberately kill more than say the ten or fifteen thousand Arabs its killed since 1948.  It would never kill, say a hundred thousand or a million.  Unfortunately, history has offered up the American example of two atom bombs used against Japan within a week.  Though no one has used a nuclear weapon since, we let the bomb out of Pandora’s Box and Israel would clearly be willing to use it if it had to.  Can anyone say that they’d trust Israel’s judgment in using such a weapon as an absolute last resort to stave off national catastrophe?

Germany has offered the subs to Israel on terms that what can only be called a sweetheart deal: the seller finances one-third of the purchase price ($168-million), but Israel doesn’t make its first payment till 2015.  Is Germany that desperate for customers that it had to practically pay the Israelis to buy weapons that can incinerate half the Middle East?

It seems to me that right about this time some German moral thinkers (aside from Gunter Grass, whose criticism of the sub deal was right on the mark) and peace activists should be doing some very deep soul-searching about why their country has offered a weapon of such enormous power to a country which has done nothing but resist making peace in the region over the past 45 years or more.

Israeli Defence Minister Ehud Barak told SPIEGEL that Germans should be “proud” that they have secured the existence of the state of Israel “for many years.”

These weapons have done much more than secure Israel’s existence.  They’ve secured Israel’s ongoing intransigence in any matters pertaining to peace negotiations.  This in turn makes the Middle East a much more unstable place, which doesn’t render Israel more secure, but rather less.

There is talk by Angela Merkel of making delivery of the last two submarines contingent on Israeli flexibility concerning settlements.  But once Germany has let the cat, in the form of four submarines, out of the bag, what more can they do?  I’d say it’s too little, too late.  The conditions should’ve been negotiated before the delivery of the first submarine (or the second or even the third).