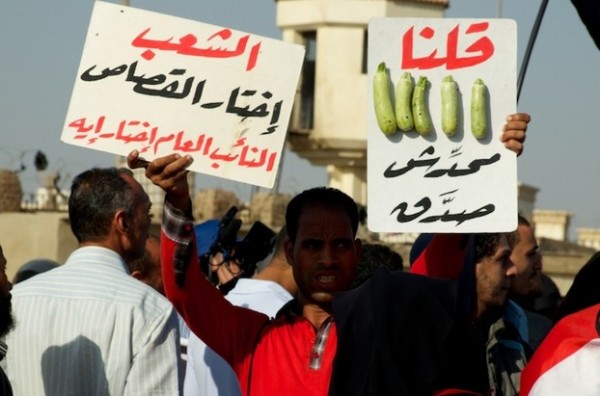 Cairo – Thousands of people descended on Tahrir Square to protest on Saturday night, a spontaneous outpouring of anger after a Cairo court sentenced former president Hosni Mubarak to life in prison but acquitted a number of other former regime officials.

The verdict was initially met with euphoria: Egyptians celebrated upon hearing that Mubarak was convicted of complicity in the murder of more than 800 protesters during the Egyptian revolution in January of 2011. It was the first time an Arab head of state had been convicted, and a major accomplishment for the revolution which toppled Mubarak nearly 18 months ago.

But the joy was short-lived. Mubarak’s two sons, Gamal and Alaa, were acquitted of corruption charges, and several senior security officials were found not guilty of murder. Some had wanted Mubarak to face the death penalty; others appreciated the verdict, but expected it would be overturned on appeal.

So they flocked to Tahrir Square, the heart of last year’s revolution, to voice their frustration, not just with the verdict but with Egypt’s post-revolution military leadership.

“It’s garbage,” Najdi Mohamed el-Din said of the verdict. “And it has made us realize something. The revolution of January 2011? We need to do it again, and we need to do it until everyone who was with Mubarak is gone.”

More than 5,000 people had gathered in Tahrir before midnight, and some planned to spend the night. The atmosphere felt almost nostalgic, as if protesters were reliving their roles from last year’s revolution. Many vowed not to leave the square until their demands were met.

Yet they struggled to articulate what, exactly, those demands were, and there were moments of disunity inside the square. At one point, the April 6 youth movement tried to hoist its flag; other protesters demanded they lower it. An hour later, a heated argument among another group ended with several men beating each other with folding chairs.

’Unless the revolution continues’

Several prominent politicians visited the square on Saturday night. Hamdeen Sabahi, the defeated leftist presidential candidate, was the first to appear, to an energetic welcome. “You are the president in our hearts,” some protesters chanted. Abdel Moneim Aboul Fotouh, the moderate Islamist candidate who placed fourth in last month’s presidential election, also made an appearance.

So did Mohammed Morsi, the Muslim Brotherhood’s candidate and one of two contenders in the runoff election later this month. In a press conference before his visit, he tried to present himself as the revolutionary candidate. “There will be no fair elections, no fair trials, unless the revolution continues,” he said.

Yet his newfound praise for the revolution – the Brotherhood has historically kept its distance from the protests in Tahrir – failed to win him much support from the crowd in Tahrir. “The Brotherhood is coming?” one man asked sarcastically. “Where have they been?”

Whether Morsi or Shafiq, the next president will face a tricky political question in dealing with the Mubarak verdict.

Judge Ahmed Refaat, the presiding judge, acknowledged problems with the prosecution’s case, which has been widely criticised by legal experts here. He ruled that prosecutors did not present compelling evidence that Mubarak directly ordered the killings.

But Refaat faulted the former president for not stopping them, and delivered an eloquent speech about what he called the “dark days” of Mubarak’s rule. He stressed several times that the protesters last year were non-violent.

“They marched peacefully towards Tahrir Square, demanding justice, freedom and democracy,” he said.

Still, many Egyptians think the verdict gives Shafiq legal grounds to pardon Mubarak if he is elected. He released a statement which said the verdict proved “no one is above accountability.”

Morsi, meanwhile, vowed earlier this week to keep the former president in prison “forever.” The Muslim Brotherhood called the verdict “shocking” to “the families of the martyrs.”

’This is a victory’

Dozens of those families were on hand at the police academy in northern Cairo which served as a courtroom for the trial. There was no way to watch Saturday’s session from outside the academy, so the crowd huddled around cars and portable radios to listen. When the judge read Mubarak’s sentence, a huge cheer erupted from the crowd; some people fired sparklers into the air, while others fell to their knees to pray.

“I thank God. I thank God, and I thank the judge. This is a victory for all the Egyptian people… this will not make [my son] come back, but this is just,” said Umm Saber, whose son was killed by security forces last January.One elderly couple knelt on a poster bearing a photograph of their dead son, crying and shouting “God is great.”

But among many in the crowd, the initial excitement quickly gave way to skepticism and frustration. Some people had hoped for a death sentence. “He should hang,” said Umm Farouq. “He kills the Egyptian people for being hungry, and now he can live in prison, in comfort.” (Mubarak has been held since last year not in prison, but in a military hospital, which many local media reports have described as a comfortable facility.)

The 84-year-old president was brought to Tora prison after the verdict, and reportedly refused to leave his helicopter; state media reported that he’d suffered a heart attack.

Habib al-Adly, Mubarak’s longtime interior minister, was also sentenced to life in prison for his role in the killings. Many people had expected him to receive a death sentence.

Confusingly, several of al-Adly’s top aides, including the former heads of Cairo security and the notorious Central Security Forces, were acquitted of any role in killing protesters.

Mubarak was acquitted on corruption charges. His two sons, Gamal and Alaa, were also acquitted, a ruling that prompted anger outside the courtroom. “They bankrupted this country and now they are free?” one man yelled incredulously into a loudspeaker.

The judge said those charges were dismissed because they dealt with crimes which occurred more than a decade ago. Gamal and Alaa will remain in custody, however, because they were charged earlier this week with stock market fraud.

“They can just take the money they stole and, whoosh,” said Mustafa al-Helmy, using his hands to mimic a running man.

A small group of pro-Mubarak demonstrators held their own rally outside the police academy, separated from the victim’s families by hundreds of police officers and dozens of armoured vehicles. One of them held a sign proclaiming Mubarak “a hero of peace and war.”

“He was a great man who fought for his country,” said a man who gave his name only as Ahmed. “They [the opposition] just want revenge, but this is not justice.”

Many of the demonstrators outside the police academy quickly linked the verdict to the runoff election; some said Shafiq should have joined Mubarak and al-Adly in the dock.

“He isn’t the only one,” said Karim al-Azazi, referring to Mubarak. “SCAF [the military junta] has killed so many of us. Remember Abbasiyya. Remember Mohamed Mahmoud,” he said, referring to two major confrontations with security forces in recent months. More than 40 people were killed during the weeklong clashes on Mohamed Mahmoud street in November, and nine people were killed in Abbasiyya, near the defence ministry, in May.

“Mubarak goes to jail, but his right hand becomes president,” he said, shaking his head.