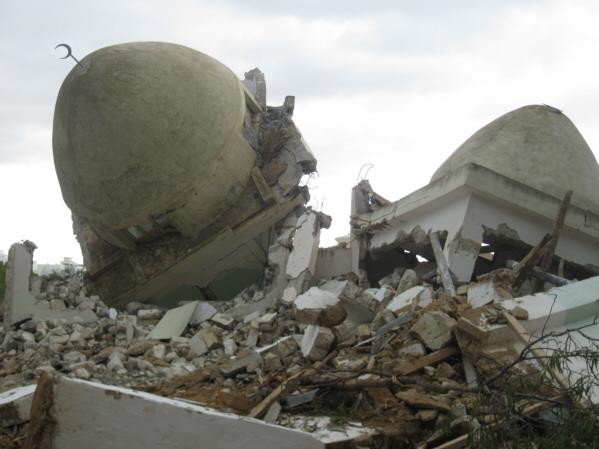 Mohamed Salem believes it was divine intervention that saved the Muslim holy site where he works from being destroyed.

In early March, word reached the keepers of the ornate shrine, the most important of its kind in Libya, that ultra-conservative Salafis were on their way to destroy it as part of a campaign to wipe out any symbols they see as idolatrous.

The curators sent for help. Volunteer militia units came from nearby towns. They surrounded the shrine complex – which houses the tomb of the 15th-century Sufi scholar Abdel Salam al-Asmar – with pick-up trucks mounted with anti-aircraft weapons, and waited to repel the attack.

Then a sandstorm, rare at that time of year, whipped up and shrouded the mosque from view. The attack never came.

“The dust was so thick and the wind so strong you couldn’t see your hand in front of you,” said Salem, a caretaker and religious teacher at the complex. “God protected the grave of this scholarly man and protected us from harm.”

Since last year’s revolt ended Muammar Gaddafi’s 42-year rule over Libya, people have grown used to looking to their own resources, or to God, to help them out, because they feel they cannot count on their government.

The struggle over this shrine in Zlitan, about 160 km (90 miles) west of the Libyan capital, is the story of Libya as it struggles to re-shape itself after Gaddafi’s rule.

It is the story of the battle for the right to define what it means to be a Muslim in Libya, of theological arguments being settled by weapons, and of an interim government that is so weak that it cannot impose its authority over opposing factions.

The ending has not yet been written.

The conflict over the al-Asmar tomb and hundreds of other shrines like it has not been resolved. Instead, the National Transitional Council (NTC) has postponed a decision by ordering that all the shrines be closed until it decided on a way out.

“We are keeping this subject on hold,” said NTC spokesman Mohammed al-Harizy. “We have other subjects which are more important than the graves right now.”

One afternoon in March, Salem unlocked and pushed open the door to the shrine, at the centre of the complex which also includes a school and a mosque.

A burst of incense and musk greeted him as he slipped off his slippers and muttered a short prayer before entering the cool room.

The coffin of al-Asmar stood inside, covered with Turkish rugs and surrounded by intricate blue and white mosaic patterns on the wall.

Students from all over Libya come to study Islamic law and to memorize the Islamic holy book, the Koran, at the university and school built around the shrine. Now, numbers are down.

In the school halls, the voices of young boys and girls echo in unison.

“We usually have 600 girls a day come to memorize Koran, but the parents are now afraid the Salafis will attack so only 100 show up,” said teacher Wafa al-Ati.

Sufism, a mystical strain of Islam, dates back to the faith’s early days. Apart from the standard prayers, Sufi devotions include singing hymns, chanting the names of God or dancing to heighten awareness of the divine.

Sufis also build shrines to revered holy men and scholars and make pilgrimages to them. There are hundreds of the shrines all over Libya. Even Gaddafi, with his ambivalent attitude to religion, did not try to interfere in a practise that is so deep-seated in Libyan culture.

But since the end of Gaddafi’s rule, a new trend has emerged to challenge Sufi traditions.

Under Gaddafi’s rule, many Salafis were jailed for their beliefs and those not imprisoned spent years avoiding any outward manifestation of their beliefs.

Files from Gaddafi’s internal security agency, seen by Reuters after the revolt, show there was a special department set up to track hardline Islamists. Anyone suspected of affiliation was denied the right to travel abroad, enrol in university or take public sector jobs.

Since that system of repression collapsed, Salafis have become emboldened. Some have acquired weapons and used them to enforce their ultra-purist view of Islam.

The Salafis believe Islam should be followed in the simple, ascetic form practised by the Prophet Mohammed and his disciples. Any later additions to the faith — including tombs or lavish grave markings – are viewed by them as idolatry.

They have alarmed many secularist Libyans by trying to enforce their strict moral code. The Salafis have burned down halls were parties are held and harassed women who do not cover their heads.

In the eastern city of Benghazi, organisers of a rap concert featuring a famous Tunisian artist were forced to cancel the event after being threatened by a Salafi brigade called Libya’s Shield.

Worried that the Salafis would attack their joyful annual parades to celebrate the Prophet Mohammad’s birthday in February, Sufi mosques sought safety in numbers and held a joint procession in Tripoli’s walled old city. The event, which Salafis also consider idolatrous, went off without incident.

The main front in their campaign has been their attacks on Sufi shrines, which are a traditional part of Libyan Islam. Dozens have been demolished all around the country and the bodies of their holy men dug up and dumped elsewhere.

The defenders of the shrine in Zlitan believe a Salafi militia, called the Thalath Salafi brigade, was behind the aborted attack on the complex.

The brigade is stationed in a former military base in the nearby town of Khoms. Commanders declined an interview with Reuters but in March, a spokesman addressed an angry crowd calling for their departure from the town.

“Having any sign or tomb marking a grave is a form of infidelity and must be removed,” said the spokesman for the brigade, Jalal al-Gheit. “We prefer to call it a reorganization of the graves.”

The evidence of the Salafi campaign can be seen at what remains of the Sidi Gibran shrine, also in Zlitan.

Large concrete pieces attached to metal wires dangle from where the roof used to be. A hole filled with rubble remains where the grave of the holy man, after whom the shrine is named, was dug up.

The shrine’s caretaker, who lives nearby, said he witnessed the desecration one afternoon when he heard the rumble of a tractor outside his house.

“I walked out and was surprised to see 16 bearded Salafis carrying Kalashnikovs, and breaking the tomb using a Caterpillar tractor,” said Faraj al-Shimi. “They all ran away when I threatened to call the police.”

He said that the complaint he filed four months ago was still pending.
MUDDLE AND INDECISION

The NTC has a lot on its plate trying to run a country that, since Gaddafi’s downfall, has been floating on a wave of hope and optimism but at the same time often seems close to slipping into chaos.

It is only beginning to build a state army and police force. There are still armed militias that answer only to their own commanders and refuse to disarm. It is trying to organise the country’s first election next month.

That may partly explain why the official response to the crisis has been characterised by muddle and indecision. There is also confusion at the top of the religious hierarchy, where some officials seem to be theologically closer to the Salafis than Libya’s traditional Sufi-inspired Islam.

But he was also reported to have remarked that the time for such action was not ripe, a comment nervous Sufis took as a sign his defence of shrines might not be as strong as it might seem.

In March, NTC chairman Mustafa Abdel Jalil met the mufti and representatives of Libya’s Sufi and Salafi camps. Salem, the curator of Zlitan’s al-Asmar shrine, was at the meeting. He said he asked for security for the complex.

Instead, the issue was fudged. Salem said he left the meeting with an order from Abdel Jalil to shutter the tomb and wait for further notice. “We received no security,” he said.

Harizy, the NTC spokesman, said the quarrel was all part of a natural evolution for Libya.

“Libyan people are used to working in secret, so no one knows who’s who,” Harizy said. “So we have to open the door for everybody to express his opinion and to try to bring the Islam which is moderate.”

In the meantime, caretakers at the al-Asmar shrine have the more immediate concern of how to stop the complex from being destroyed by Salafis, without help from the state.

For the past few weeks, the complex has organised an armed brigade of 30 to 40 volunteers from Zlitan who stand guard at the tomb.

“We are not protecting this tomb because we worship it,” said Salem. “We protect it because it is a part of our heritage and culture.” (Additional Reporting by Mussab Al-Khairalla; Editing by Christian Lowe, Tom Heneghan and Sonya Hepinstall)