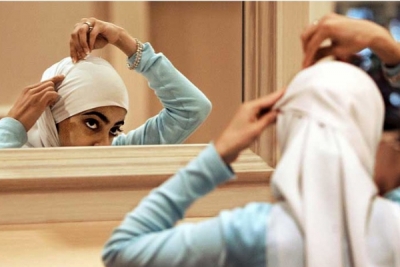 ST. LOUIS — A Muslim civil rights group is calling on St. Louis County to revise its policy that requires female Muslim inmates to remove religious headscarves, but the director of the jail said the headdress can pose a security risk.

Faizan Syed, director of the St. Louis chapter of the Council on American-Islamic Relations, said Tuesday that a 23-year-old Ballwin woman was jailed for about seven hours because of an unpaid traffic ticket. A jail officer ordered her to remove her traditional Islamic headdress, known as a hijab.

The woman refused because the Islamic religion forbids women from exposing their head or neck to men outside their immediate family. Syed said the female officer snatched the hijab from the woman’s head in front of men—jail employees and male inmates. She spent the rest of her time in jail without the hijab.

“She was very emotionally distraught,” Syed said. “For a Muslim woman, it’s the equivalent to having her clothes removed in public by somebody else.”
St. Louis County Justice Services director Herb Bernsen said jail policy forbids inmates from wearing anything on his or her head for security reasons, mostly out of concern that a weapon could be hidden in the scarf.

“We have to be concerned about security first,” he said.

Syed said there are ways to ensure security without compromising a woman’s religious beliefs. He said that in some jails, a woman is taken to a private room, removes the headscarf in the presence of a female jailer and is given a jail-issued head covering. As for mug shots, he said some jails take two photos—one with the head covering to be used publicly and one without for internal use only.

Bernsen said he has not been contacted by the council, but he is open to dialogue. He said he is also checking with jails around the country to see how they handle the issue.

Courts have ruled on both sides of the argument.

In October, the U.S. Supreme Court upheld a California Muslim woman’s right to sue Orange County because its jailers forced her to remove the hijab.

In Minnesota last year, Amina Farah Ali was jailed, She refused to leave her jail cell in protest of a ban on headwear at the Sherburne County Jail. She was later moved to another jail where the head covering was permitted.

Syed said the council is willing to work with corrections officers better understand Islam and Muslims. He said that, for now, the Ballwin woman is not considering a lawsuit, but wants the St. Louis County policy changed. She also wants an apology, he said.

“Religious rights should not end at the jailhouse door,” said CAIR-St. Louis Executive Director Faizan Syed. “With goodwill on all sides, a solution can be reached that maintains constitutionally-protected religious rights as well as legitimate safety and security needs.”

Syed noted that the U.S. Supreme Court recently refused to overturn a lower court ruling that said a Muslim woman “had the right to wear the scarf unless jailers could show it was a security risk.”

In that case, the Muslim woman’s suit cited the Religious Land Use and Institutionalized Persons Act (RLUIPA), which prohibits state and local governments from imposing “a substantial burden on the religious exercise of a person residing in or confined to an institution.”