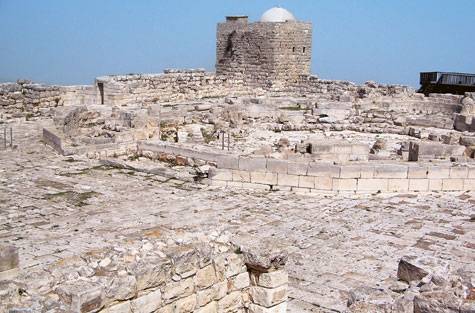 Ramallah Relations between Palestinian Muslims and the small sect known as Samaritans, have recently deteriorated following an Israeli “scheme” to exaggerate historical and religious differences between the two.

The tension surrounds the claim by both groups to Mount Gerzim, the highest point in the West Bank city of Nablus. For Samaritans, it is their direction of worship and for Muslims it is the site of a tomb of a wise man living during the era of the great Muslim leader Salah Al Deen Al Ayoub.

According to Israeli classification, Mount Gerzim is part of the city of Nablus and categorised as Zone C, which means it’s under the full control of Israel. However, Israel has plans to hand the land back over to Palestinian jurisdiction.

Behind the scenes, however, Israel has been giving private promises to the Samaritans that the area will be handed over to them. For now, Israel has sealed the area off completely and only permits Samaritans to visit three times a year. Samaritans believe that Adam and Eve first met on the mountain. They also believe that both Prophet Noah and Prophet Ebrahim used the mountain to offer sacrifices to God.

They also believe the Torah, written in the ancient Hebrew script, was found on this mountain. Samaritans do not believe Jerusalem holds any significance to the Jewish faith, rather they believe the real temple for Prophet Moses was built and remained on Mount Gerzim for 260 years.

After four centuries, King Sulaiman built a temple in Jerusalem, which falsely became the centre of the current orthodox Jewish belief, according to the Samaritans.

During the Byzantine Era, the Samaritan temple on the mountain was destroyed and the Virgin Mary Church built in its place. Under Christian rule, the Samaritans were stripped of their religious rights and banned from practising their religion freely.

“For the Samaritans, Mount Gerzim is the holiest place on earth. Israel has politicised the issue, unfortunately,” Hosni Cohen, a Samaritan priest and director of the Samaritan Museum, told Gulf News.

For Muslims, the tomb of the Muslim Shaikh Ganem is on top of the mountain. Shaikh Ganem enjoyed great fame under the era of Salah Al Deen and one of the Jerusalem gates is named after him.

“A large part of Mount Gerzim is an Islamic Waqf, registered under the name of Shaikh Ganem and his descendants,” Abdullah Al Younah told Gulf News.

“Israel should stop playing games and hand the area over to the Palestinian National Authority, which should run the area,” he said.

The Samaritans is a minor sect of the Jewish people, but they have thousands of major religious differences with the Israeli Jews. The Samaritans are a tribe of the original children of Israel, who left Egypt under the leadership of the Prophet Moses and settled in Jordan.

The Samaritans constitute a small minority group of 740 individuals, of whom 350 live in the city of Holon, near Tel Aviv and the rest live in the city of Nablus of the West Bank. Samaritans who live in Nablus enjoy full national and civil rights, where they are considered a part of the Palestinian public. They also hold Israeli citizenship. Samaritans believe that they own the original Torah which is 3,638 years old.