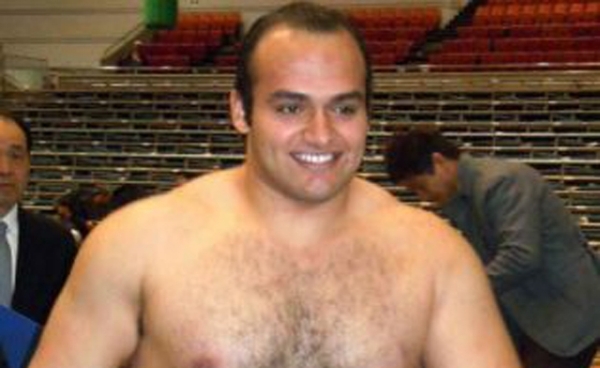 But Egypt’s Abdelrahman Ahmed Shaalan, the first professional sumo wrestler from both the African continent and Arab world, faces some mighty challenges as he embarks on a quest to become a yokozuna, or grand champion.

The man known by the ring name Osunaarashi, which translates as Great Sandstorm, prays five times a day as a devout Muslim, a tough routine given the intense daily training schedule required for sumo’s highly ritualized contests.

Small in number, foreigners are vital members of tradition-bound sumo as more Japanese youngsters with high athletic abilities tend to choose baseball, football and other lucrative or more high-profile sports with less rigid conventions.
Mongolians have been a dominant force in the top ranks for years, although Shaalan is among the sport’s first Muslim competitors.
As such, the 20-year-old does not touch the deep-fried pork cutlets loved by millions of Japanese or drink vast quantities of beer and rice wine sake, staples of a diet that sumo wrestlers rely on to bulk up, since Muslims avoid pork and alcohol.

But Shaalan, who quit his university accounting degree to enter sumo’s professional ranks, is undeterred, and brushing aside the challenges presented by the holy month of Ramadan when he cannot eat or drink during daylight hours, knowing that regular sumo tournaments are held in the afternoon.

“I am confident that I can overcome my challenges,” the burly wrestler told Japanese media last month after winning his first two professional-level matches at a tournament in the western city of Osaka.

Shaalan, a native of Giza, which is home to Egypt’s pyramids, insisted he was able to train for at least four hours in the daytime during the Islamic celebration.

“I want to become a wrestler who represents Arab and African nations… My dream is to become a yokozuna,” said the Egyptian, who stands at 189 centimeters and weighs 145 kilograms.

He did, however, concede: “I am a little bit worried. But no problem.”

Japan’s sumo association could not say whether the Great Sandstorm is the sport’s first Muslim competitor. There have been unconfirmed reports of Muslim sumo wrestlers in the past.

His coach, a former wrestler known as Otake, has promised he’ll keep his new recruit in top shape, even changing the recipe for a meat, vegetable and fish stew known as Chankonabe which wrestlers devour on a daily basis.

“When we serve pork cutlet, we prepare chicken cutlet for him. When we use pork for Chankonabe, we let him eat something else,” the coach said.

“But I want him to get used to the customs and traditions of the sumo world otherwise.”

Shaalan’s coach is most concerned about keeping his young apprentice focused amid the media storm sparked by the newcomer’s spectacular debut, which included dumping his Japanese opponent with a powerful arm throw.

“It was very exciting,” declared the novice, who was not allowed to do a one-on-one interview under sumo association guidelines for new recruits.
Otake was less enthusiastic about the victories that earned Shaalan a coveted spot in the sport’s bi-monthly tournaments, although he will start at the bottom of the rankings at the next meeting in May.

“He needed to crouch lower in exchanging thrusts,” the sumo master said, adding that his apprentice was not flexible enough to do the splits.
“I will teach him to become more humble as his ranking rises.”

Shaalan’s arrival in the pro ranks came after he won an open-class bronze medal at the 2008 world junior sumo championships and an over-100 kilogram bronze at the 2010 edition.

Despite its popularity, the sport has suffered in recent years with a hugely damaging bout-fixing scandal that infuriated the public and forced the resignations of about two dozen wrestlers and a stable master.

Sometimes brutal training methods and allegations of illegal drug use have also come under the microscope.

None of that is likely to turn off the determined Shaalan, whose love affair with sumo began at the age of 15 when he was invited by a friend to a practice session.

“I was impressed by the strength of sumo wrestlers who behaved as if nothing had happened even after they lost or got tired,” he said.

“I want the world to understand sumo.”