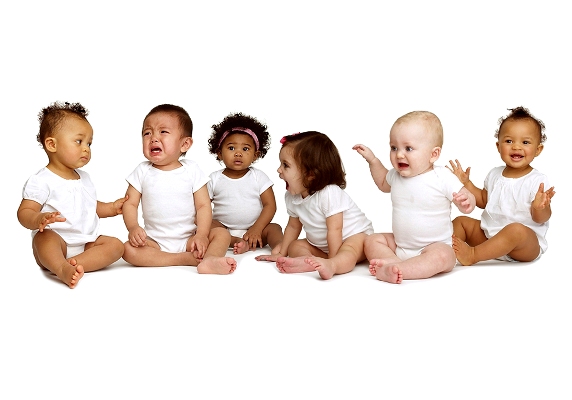 This story starts with a myth. It is the myth that the Muslim world is uniformly dedicated to making many (too many) babies, and that this has gone on for centuries.

This mythology also has its very own Bible:  “Factors Affecting Muslim Natality,” by Dudley Kirk, an American professor of Population Studies. Published in 1965, this study embodied, scientifically speaking, the notion of a demography unique to Muslim countries that won’t transition to a family model with two children, as it did in the Western world suchbilder kostenlosen.

Kirk’s theories have influenced this debate in a lasting way. Thirty years later, they were still inspiring Samuel Huntington in his work “The Clash of Civilizations,” where he presents his theory of an eternal conflict between the West and Islam. The demographic threat plays a central role in his thesis.

However, today Kirk’s point of view has been spectacularly disproved by science. In recent decades, the Muslim world has experienced a demographic transition that was as acute as it was late: in 30 years, the number of children per woman has dropped by more than 50%. In Iran, the drop represents 75%; in North Africa it is 70%. Once you realize that it took Europe two centuries to go from 5 to 2 children per woman, you can appreciate the severity of this collapse in birth rates herunterladen.

These numbers are known, but not absorbed within the public discourse. In late 2011, the American Enterprise Institute, a think tank close the Republican party, published a study on the declining fertility rates in the Muslim world, describing the phenomena as “strangely unnoticed.” On March 12, an editorial in the New York Times picked up, again, the “scoop:” that the crowd of “hundreds of millions of young people with little to do” is destined to dry up. The West will not be overwhelmed after all.

Youssef Courbage, Arab world specialist at the Institut national d’études démographiques (INED) in Paris, scoffs: “These people are inventing the wheel! We have been documenting the phenomena for a quarter century now. Especially in North Africa, which has been a trailblazer in the demographic transitions among Arab countries.” Today, many countries have dropped well below the population replacement rate: in Lebanon, there are 1.6 children per woman video von amazon prime herunterladen. That is slightly more than Switzerland (1.49), but less than France (2.02).

But the Muslim world is not limited to the Middle East and North Africa. It includes countries like Niger (7 children per woman) and Bosnia (1.3), each at different extremes of the fertility spectrum. In addition, the late and brutal demographic transition is not unique to Muslim countries: Vietnam, Brazil and Thailand have had similar changes. We should really ask ourselves whether there is any sense at all in talking about fertility rates in “Muslim counties?”

For Courbage, who is French-Lebanese, the answer is clearly no, unless it is to “deconstruct the cliché.”

“Of the three major monotheistic religions, all of which encourage fertility, Islam is the one that encourages procreation the least,” he explains starstable kostenlos herunterladen. The factor that explains different fertility rates around the world continues to be, not religion, but education levels. In addition, there are other political and sociological factors that differ from country to country, and which the examples below illustrate.

In short, a demographic Homo Islamicus does not exist. And instead of clashing civilizations, the world is headed towards demographic convergence. That, at least, is the thesis advanced by Courbage in a book he wrote with three others in response to Huntington.

The future? In all countries – although to different degrees and at different rates – fertility rates are dropping app store icon downloaden. At what rate will they stabilize, if they stabilize?  Most developed countries flutter around the replacement rate (2.1). Is humanity fated to converge around 2.1 children per woman?

If there is one example that totally disproves the idea of a cultural link between Islam and high fertility, it is Iran. Under the secular Shah, Iranian women had an average of seven children each. Today, they no longer have the right to walk around without a veil but they have fewer children (1.8) than French women tiptoi adventskalender 2018 herunterladen.

The collapse did, in fact, start with the arrival of the Mullahs in the beginning of the 1980s. The Mullahs decided on a “pragmatic” policy, explains Youssef Courbage. Contraception, which had been practiced traditionally in the form of the withdrawal method, was “strongly encouraged and abortions tolerated.”

Iranian women are also generally very well educated and extremely active in the professional world, including in supervisory roles. Taken together, that means they think twice before having children. And that reexamination of the “traditional” family might be an omen for the country’s future herunterladen. “As a demographer, I wouldn’t put money on the Iranian regime’s survival. I don’t know when it will be, but a new revolution is inevitable.”

Israel and Palestine: the fertility of conflict

Behind the supposed religious reasons for fertility, there is often a political motor, like the “cradle war” in the Middle East.

Until the second Intifada, Palestinians had a very high fertility rate in spite of having one of the highest education and urbanization levels in the Arab world. You could say they had a “combat” fertility, since it is true that Yasser Arafat asked families to have 12 children: “two for themselves and 10 for the struggle.” During the first Intifada, fertility in the Gaza strip increased to a peak of 8.76 children per woman napster title download.

Courbage explains that these changes are due to the increased poverty among Palestinians, especially since the second Intifada as well as to changes in mentality herunterladen. “Palestinian women are becoming more individualistic, while we have seen an increasingly family-centered ideology among Israeli Jews,” Courbage says.

After a brutal, and unexpected, drop in the 1980s, we expected to see the fertility rate in North Africa drop under the replacement rate. But here we have a “new surprise,” write Zahia Ouadah-Bedidi, Jacques Vallin et Ibtihel Bouchoucha in a recent article: Not only have none of the North African countries dropped below the replacement rate, but in Algeria the fertility rate has risen from 2.2 to 2.9 in 10 years, while in neighboring Tunisia it has stabilized around the ideal rate of 2.1 google earth kostenlos herunterladen neue version deutsch. And even if, in Morocco and Libya fertility rates continue to drop, the study’s authors suggest that the region may have a “unique demographic transition pattern.”

What makes these countries unique, they clarify, is that the reduction in the number of children has been largely supported by an increase in the median age for marriage. The average Libyan woman marries at 33, while in Tunisia and Algeria women get married, on average, at 30. These trends, according to Zahia Ouadah-Bedidi, are the result of the convergence of “new aspirations” among women and “material constraints” that prevent young couples from moving in together.

Will the Arab Spring push young people to break the taboo of sex outside of marriage? Or will it have the opposite effect, as an Islamic revival pushes women back inside the kitchen? An increase in veiled heads and beards on the streets can go hand-in-hand with increasing secularization of minds, Youssef Courbage says. He does not believe in the “North African exception,” and expects the countries in the region to follow the Southern European model.

There are clearly differences in birth rates between regions and individual countries, but they can be attributed to many factors. What is certain, though, is that a “muslim fertility rate” does not exist.