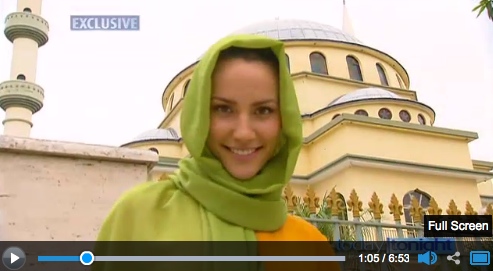 For many, suburban pockets like Bankstown in Sydney or Coburg in Melbourne are like countries within a country, with their own rules, their own dress code and their own language.

But one person has been welcomed in and granted access to seek out the truth, and dispel the urban myths.

According to demographer and social commentator Bernard Salt “the Muslim community – like any community – like to congregate where people speak their language, where their places of worship are located, and newspapers and supermarkets that provide their food.”

Finch is walking in the shoes of Rebecca Kay, a devout Australian Muslim woman and mother of four. Kay was born in Australia and became Muslim about eight years ago.

But Kay, a former Wollongong surfer girl, has a confession. “Before I was a Muslim, I was a Muslim hater. I used to listen to talkback radio a lot, and have that same kind of attitude. I used to love saying to people ‘if you’re not happy here, then you can go back to where you came from’,” she said.

Today however, Kay is the perfect example of the modern Australian Muslim woman – politically active, driven and fiercely protective of her culture.

“Fearing god and believing in god has taught me to love my fellow human being again, and appreciate people for who they are, not their colour of skin, or the way they look,” Kay said.

Before the cultural exchange can begin, Finch gets the blessing of the Muslim Women’s Association.

“For me it’s a respect thing, because I honour and respect what they’ve done, and I see them as role models,” Finch said.

“It’s important to go and see the elders before we continue on this journey of spirituality, and introducing Rachael to the Islamic culture and faith. Without the elders’ approval you can’t really go anywhere,” Kay explained.

For Salt, respect for elders is “one of the areas where native Australians, domestic Australians, could learn a lot from migrant communities – the way they defer to the elderly in many cases.” A big part of Kay’s week is volunteer work at My Home Respite, a community-based respite centre for children with special needs.

“The women who work there are volunteers, they don’t get paid. Five days a week these women are there,” she said.

“Walking into that respite centre, and seeing those women give up their time for free, to help those less fortunate than them, is an overwhelming feeling,” Finch said.

Over lunch at local favourite, Jasmine One, Finch got acquainted with her first Lebanese feast, before heading off to Auburn Gallipoli Mosque.

Outside, Finch’s physical transformation is clear, but it’s inside the Mosque where she feels different and changed.

“As soon as I walked in, there was a sense of peace and happiness, and if I was to drop a pin I could hear it,” she said.

Finishing off her day with the girls with a shopping trip, Kay shows Finch what Islamic fashion is all about, before heading home to prepare dinner.

“We have people over all the time, it never ends. A lot of people have a lot of kids, they all play together, and it’s really loud,” Kay said.

“We have taught the Greeks, the Italians and perhaps the Muslims about the joys of the backyard barbeque, and they have taught us about new food stuffs, and new values perhaps – like valuing family, valuing the elderly in society,” said Salt.

Finch says she thoroughly enjoyed her day with Kay.

“It was absolutely beautiful,” she said. “I really learnt a lot, and am so grateful for this opportunity.”

“It was nice to be able to walk in her shoes, and see that stereotypes of Australian Muslim women aren’t particularly true. It was a success – to see what multiculturalism is all about, getting to see at the end of the day, we’re all Australians no matter what colour our skin is, or what we believe in, or what our backgrounds are – we’re fair dinkum, dinky die Aussies,” Finch said.

“They’re intelligent, they’re smart, they’re independent, they want a career and they want a family, and to me that’s empowering.”

Kay hopes that something good can come of this story, and that it can encourage people to be more open-minded.
Salt sees the cultural exchange as a positive step. “I think the experiment with Rebecca shows very much the way of the future, with an open and tolerant mind on both sides,” he said.

If you thought this story was positive, contact Today Tonight and let them know: