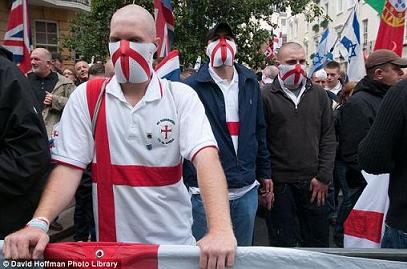 LONDON – The far-right, anti-Muslim English Defense League (EDL) is preparing to form a new political party amid critics’ accusations that it will represent a new far right front in Britain.

“The British political anti-Islamist party will be launched in May at our Luton demonstration,” Stephen Lennon, head of the English Defence League (EDL) told Reuters on Saturday, March 24.

“At the Luton demonstration, the whole country will hear an anti-Islamist political party that gives everyone an option in a non-racist way – the opposite to the British National Party,” he added, saying the new body would be called the Freedom Party.

The EDL, a far-right group that emerged in 2009, has held numerous protests against what it calls “Islamic extremism” in Britain.

The three-year-old grassroots group gained international attention last July after Anders Behring Breivik, the Norwegian who killed 77 people in what he said was an international mission to counter Islam, claimed to have had contact with EDL members and leaders.

The EDL has denied any formal links to Breivik and Lennon rejects the description of his group as far-right.

“We hate Nazis, we’re anti-Nazi,” he said, emphasizing his groups’ support for Jews and Israel.

“In England, we’re the only organization that stands up for the Jewish community.”

Concerns have been growing in Britain and across Europe over the rise of white and supremacist groups.

In Britain, far-right groups like the EDL and the British National Party (BNP) are playing the card of immigration to stoke sentiment against Muslims and immigrants.

In November 2010, British police warned that the anti-Muslim demonstration by the EDL fuel extremism and harm social cohesion in Britain.

British Muslims, estimated at nearly two million, have been in the eye of storm since the 7/7 attacks.

The new party, to be announced next May, has aroused fears of being the face of a new far-right which is opposed to all Muslims, with members who include former soccer hooligans.

Critics also warned that the group’s rallies have often ended in violent confrontations with anti-fascist organizations.

How successful the party will be is unclear, though Lennon claimed he will surpass the far-right BNP which won two seats to the European Parliament in 2009.

“If the BNP got two seats, we’ll get more than two seats,” said Lennon, who added he would not be the new party’s leader.

Other populist anti-Islam parties have enjoyed election successes elsewhere in the European Union in recent years.

Far-right Dutch lawmaker Geert Wilders has called for banning the Muslim face-veil in the Netherlands and stopping immigration from Muslim countries.

In Sweden, the far-right Sweden Democrats have unveiled plans to impose a moratorium on building new mosques in the Scandinavian country.

The move came after far-rightists succeeded to win public support for banning the building of mosque minarets in Switzerland.

In 2010, Le Pen compared Muslim prayers on the streets to Nazi occupation.