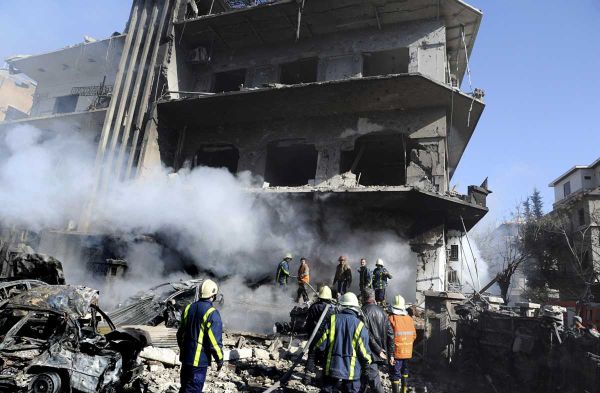 At least 27 people have been killed and 97 others wounded in a pair of explosions in Damascus, the Syrian health minister has said.

State television blamed “terrorists” for the Saturday morning explosions and reported that vehicles packed with explosives had been used. The blasts targeted buildings belonging to a customs office and air force intelligence.

Most of the casualties were civilians, state television said. The channel broadcast interviews with Syrians who blamed the attack on the United States and Gulf nations, including Saudi Arabia and Qatar, who they said had sent terrorists.

The attacks come two days after the one-year anniversary of the uprising against President Bashar al-Assad.

“I woke up to two massive explosions around 7:30 this morning – one was on Baghdad street less than a mile away from my home,” a witness in Damascus told Al Jazeera. “Relatives closer to the explosion told me their windows were blown out and doors destroyed from the blast.”

State-run news agency SANA said a third blast went off near a military bus at the Palestinian refugee camp Yarmouk in Damascus later in the day, killing the two suicide bombers.

It was not the first time bombers have struck in the heart of Assad’s power base. There were three alleged suicide bombings in Damascus between December and January

“A few weeks ago, we saw security buildings also come under attack [in Aleppo] and the government has been blaming what they are calling ‘terrorist groups,'” said Al Jazeera’s Zeina Khodr, reporting from Beirut.

She said no one had claimed responsibility for Saturday’s attacks but that the opposition has in the past blamed the government for “orchestrating” them to bolster its case against alleged terrorists.

“But we also have to remember that US officials have hinted in the past that they believe that al-Qaeda could be involved, could be taking advantage of the security vacuum in that country,” Khodr said.

The spectre of al-Qaeda could make Syria’s large minority populations more nervous about the Sunni-led uprising against Assad, whose government has sought to rally Alawite, Christian and Shia communities to its side.

Private emails allegedly sent among Assad and members of his inner circle and leaked to the media by opposition hackers show Assad receiving advice to not blame the December bombings on al-Qaeda.

“Such statements clear the US administration and the Syrian opposition of any responsibility,” wrote Hosein Mortada, a Lebanese businessman with ties to Iran and Hezbollah.

On Friday, special envoy Kofi Annan renewed calls for international unity in dealing with the crisis in Syria.

Addressing a closed-door meeting of the Security Council, Annan appealed for the divided members to send a unified message to end the year-old crackdown and military assault on protest cities that the UN says have left more than 8,000 people dead.

“The stronger and more unified your message, the better chance we have of shifting the dynamics of the conflict,” said Annan, who was selected by the United Nations and Arab League to find a negotiated end to the violence.

He said a UN team would visit Syria this weekend for talks with Assad’s government on proposals to end the bloodshed and allow in humanitarian aid.

“I hope they will have all the access that is necessary,” he told journalists in Geneva after the briefing.

Syria’s foreign ministry said the government would co-operate with Annan while at the same time fighting “terrorism”.

“The Syrian government is determined to protect its citizens by disarming the terrorists and continues to search for a peaceful solution to the crisis by co-operating with special envoy Kofi Annan,” it said in a letter addressed to the UN and carried by the state news agency SANA.