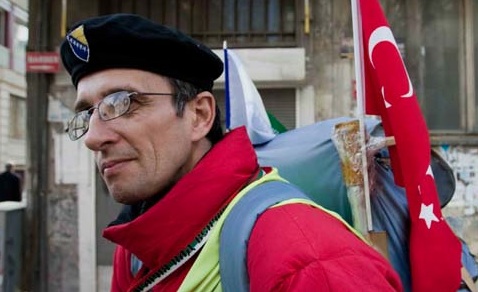 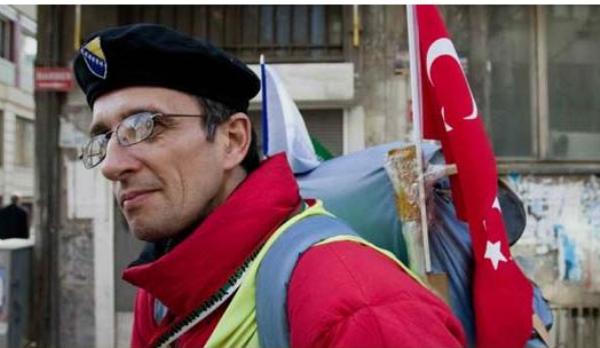 Each year millions of Muslims make the annual pilgrimage to the Saudi city of Mecca.

The Hajj, as it is known, is still far away, this year it is in the end of October, but 47-year-old Senad Hadzic has already set off in that direction.

That is because he is on foot.

He started from his hometown in northern Bosnia back in December 2011 and is walking all the way to Mecca.

The distance is about 3,600 miles from Bosnia to Mecca and he covers between 12 to 20 miles a day.

Just before hitting the road again, Senad Hadzic proudly shows the meager contents of his backback. He’s got a Koran wrapped in plastic for protection against the elements, a bible, maps and flags of the six countries he plans to cross.

“To be honest, before i started on this trip, everybody was frightened for me, asking how will I, as a Muslim, be able to travel though Christian countries like Serbia and Bulgaria,” says Hadzic.

But he was never scared, he says. Traveling with very little money, Hadzic says he’s depended on the kindness of strangers for much of the 600 miles or so he’s walked so far.

“In Serbia, people came out on the street and gave me a hat, or some socks,” Hadzic says. “In one case, a professor in Serbia invited me to stay in his house. This Serbian professor, who was a Christian, told me that I was the first Muslim who had stepped in his house in his life. It was a great honor for me.”

Istanbul has presented a bit of a snag. He’s spent 20 days here, he says, trying to get permission to walk across the Bosphorus bridge connecting Europe to Asia. It’s only open to vehicles. Hadzic doesn’t even want to mention the details of how he got it resolved.

“I’ll tell you, this trip has had millions of problems,”Hadzic says. I’ll explain it to you like this: God willing, I’m going to enter Asia today, and then Syria. And I’m not afraid of a tank or a bullet, only God. And then when I get to Mecca I will say a prayer for all of us.”

When he finally leaves the hotel, he’s excited to be on his way. Wearing a reflector safety vest and a shabby backpack, with Bosnian and Turkish flags sticking out, it’s easy to see how his eccentric character endears him with many that he meets on his way.

“An old Turkish wise man appeared and when he saw that I came from Bosnia to Istanbul on two feet, he offered me the money to sit on an airplane and go directly to Mecca for the Haj,” Hadzic says. “But I rejected this.”

Hadzic says he must travel by foot because God told him to in a dream. His act of faith is not just for his own benefit but for everyone he meets along the way as well.

“By this act, I am proving that everything I do is for the love of God,” Hadzic says. “For all the riches in the world, I would never stop what I am doing.”

Walking through this city of 13 million, in a fitting parallel with his bizarre quest, we run into a group of Bosnian tourists. Hadzic is clearly well-known in Bosnia and doesn’t need an introduction. After pictures are taken and greetings exchanged, Hadzic is back on his own.

He’s not even half way there yet but Hadzic has already learned a lot.

“The point, my friend, is learning the meaning of ‘thank you’. The poor people who live in the countryside love God and support me with generosity. The rich people in the cities love their ATMs,” Hadzic says.

After walking the more than 500 miles from Istanbul to the Syrian border, Hadzic says he plans to continue through Syria. It’s a bit risky he admits, but with God’s help he says he won’t feel fear. He plans to wave a Syrian flag with the word “victory” written on it, and pray for the victims of the conflict.