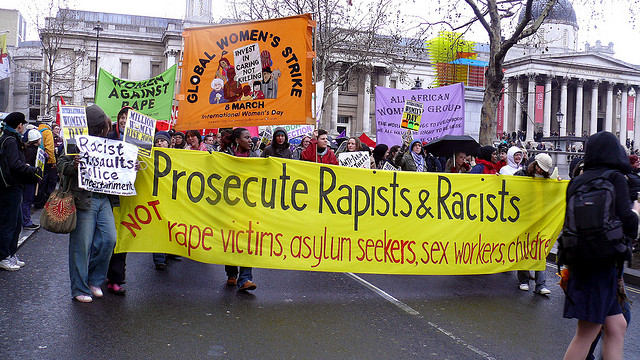 Many women are still blamed and shamed when they're sexually assaulted. Image: Mike Atherton.

Feminism is a kind of F word.

When others – men in particular – call you a feminist, there’s nothing affectionate about the tone they employ. Instead, it’s one of accusation and disgust. In the most extreme, it conjures images of bra-burning, man-hating androgynous Amazonians who resent their uterus.

Australia, like much of the Western world, is inherently patriarchal. The laws, structures and institutions of society were developed with the needs and concerns of men in mind whilst women were still confined to the private sphere.

I can hear you impatiently screaming, ‘We don’t need feminism, Islam liberated women(!!)’.

You say that the struggle for equality was won when the message of Islam was spread.

I’m not here to deny that.

In the community at present, there appears to be a growing tension between the feminist cause and its perceived incompatibility with Islam. In assuming such, we’re ignoring the diversity that occurs amongst women and their beliefs. We assume that there is only one way of being feminist. This is a falsity; in the same way that assuming there is only one way of being Muslim would be restrictive and exclusive. Diversity is an essential part of any cause and feminism is no exception.

The women’s movement is not a religion. It doesn’t govern every aspect of our lives, nor does it tell us how to think. We are free to take what we like and leave what we disagree with.

I do not praise Western Feminism uncritically. Nor do I believe it will ultimately set us free. I understand completely that its roots are in a white, middle-class movement – one that doesn’t always speak to women from other cultural backgrounds. But this does not mean that I dismiss the women’s movement entirely, dangerously discarding the figurative baby with the bath water. Instead we must recognise that at its core is the fundamental belief that Women Matter.

We all know Islam gave women rights. But we do not live under Shariah. To use Islam as a defense against the feminist plight is to use religion to justify structural and systemic inequality. It makes us complicit in perpetuating a cycle of imbalance in favour of men.

Women are still more likely to find themselves financially insecure and in precarious casual employment, which in single parent families headed by a woman can mean the difference between feeding your family and finding yourself without shelter. To believe that we’ve moved beyond a society where women are not first to be blamed or shamed when they suffer sexual abuse or assault, or where economic circumstances don’t force women into prostitution or remaining in violent relationships, is to live in a world of convenient ignorance.

You don’t have to agree with the use of the word ‘Feminism’; the cause is more important than the label. But we do have to change how we talk about women’s rights. And if you think women have reached a state of gender ‘equality’ then this Global Mail piecemight surprise you into discovering otherwise.

By mistaking ‘equality’ with the desire of women to be men, we ignored much of the hard work of feminists of the past. Arguing that Islam prescribes men and women different roles – and therefore that the entire feminist movement is un-Islamic, invalid or something equally dismissive – has little ground. Nobody is suggesting that Islamic views or beliefs on issues concerning women, family and men be neglected. In fact, there are Muslim feminists aplenty who use Islam to create a better world for women.

Allah SWT may have decreed that women and men were equal 1400 years ago, but that does not mean that women automatically live a life where their rights are fulfilled and they’re treated with the respect and understanding they deserve.

Those rights might be divinely given, but the practice relies on human interpretation – which is often flawed or skewed by cultural expectations.

Feminism and the plight for equality between the sexes will not destroy Islam; indeed Allah SWT has promised that Islam shall always survive.

It celebrates the choices of women and seeks to appreciate the contribution they make to the domestic sphere. It recognises that just because we cannot assign monetary value to what these women do, does not make their work any less important.

By the same token feminism seeks to ensure that those women who have chosen to further their careers can do so without discrimination. Perhaps most importantly it seeks to support the increasing number of women who do both.

Fear not that which you do not know and educate yourself on the reality of a pertinent situation, because securing a prosperous future for the majority of humanity depends on this.

I would never argue that Western Feminism is without flaws but it’s not the only feminism that exists. To equate the struggle of women with one version of radical (mostly Marxist) feminism is to do a serious disservice to women (Muslims included) who dedicate their lives to making the world a safer and more secure place for other women and girls. It trivialises the circumstances of women who are wronged by a system still too outdated to cater to their needs.

But just to keep the feminist-haters’ fears at bay, I have a secret to share: women don’t want to be men. They don’t want to denounce their uteri.

In fact, I suspect that a little introspection may reveal that fear of gender equality lies in nothing more than a male apprehension that one day they will be made to wash dishes.

Don’t worry boys, we have dishwashers these days.